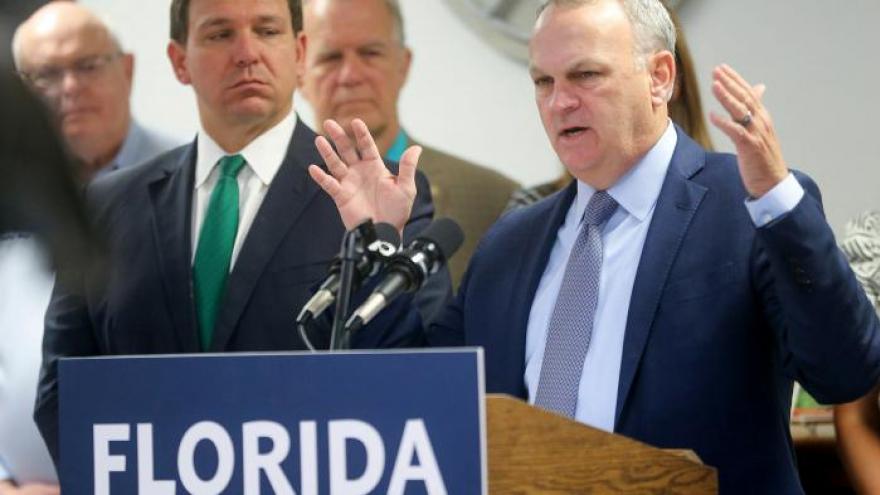 (CNN) -- The Florida Department of Education announced Friday the state has rejected more than 50 math textbooks from next school year's curriculum, citing references to critical race theory among reasons for the rejections.

In a news release, the department stated 54 out of 132 of the textbook submissions would not be added to the state's adopted list because they did not adhere to Florida's new standards or contained prohibited topics.

The release said the list of rejected books makes up approximately 41% of submissions, which is the most in Florida's history.

A list of the textbooks obtained by CNN shows that eight different publishers had submissions rejected for referencing critical race theory, social-emotional learning and other special topics. The list did not provide further details about each title or examples of the textbook passages.

Of those publishers, only Bedford and the Freeman and Worth Publishing Group did not have a title in the state's adopted list.

Tyler Reed, a spokesman for McGraw Hill, said the company is reviewing the matter and is seeking detailed feedback from the department of education.

Gov. Ron DeSantis said on Monday there were different reasons for the books being rejected and officials aimed to "focus the education on the actual strong academic performance of the students."

"We don't want things like math to have, you know, some of these other concepts introduced. It's not been proven to be effective, and quite frankly, it takes our eye off the ball," the governor told reporters at a news conference.

Andrew Spar, president of the Florida Education Association, called for transparency on how the state's department of education made the decision, including examples of "objectionable" content and details about those who reviewed the textbooks and their qualifications.

"As it stands now, only one publisher's full suite of K-5 math textbooks is available to Florida districts, and we don't have a detailed understanding of why," Spar tweeted. "The state has an obligation to ensure that every child is getting the math instruction they need with the highest quality materials."

DeSantis said state officials "got rid" of Common Core, a standardized teaching method rolled out in 2010. The method requires children to group numbers to solve arithmetic problems, rather than the vertical "carry the one" method familiar to most adults. The approach goes beyond simple computation to emphasize deeper mathematical concepts.

The department said some of the rejected textbooks incorporated Social and Emotional Learning (SEL) and references to critical race theory -- two frameworks or philosophies that some conservative groups claim are being used to indoctrinate students.

Some schools around the country have recently used SEL strategies to help students cope with stress and the impacts of the Covid-19 pandemic. The Collaborative for Academic, Social and Emotional Learning defines SEL as a teaching framework aimed at helping "young people and adults acquire and apply the knowledge, skills, and attitudes to develop healthy identities, manage emotions and achieve personal and collective goals, feel and show empathy for others, establish and maintain supportive relationships, and make responsible and caring decisions."

More than a dozen states have set standards for teaching SEL in grade schools, according to the National Conference of State Legislatures. But as more states consider SEL strategies, conservative groups have claimed critical race theory is embedded into the framework.

Critical race theory has become widely politicized in recent years. Opponents argue the area of study is based on Marxism and is a threat to the American way of life. But scholars who study it say it explores the ways in which a history of inequality and racism in the United States has continued to impact American society today.

"Critical race theory is a practice. It's an approach to grappling with a history of White supremacy that rejects the belief that what's in the past is in the past, and that the laws and systems that grow from that past are detached from it," said Kimberlé Crenshaw, a founding critical race theorist and a law professor who teaches at UCLA and Columbia University.

At least a dozen laws aimed at restricting how topics like racism, sexism, and American history are being taught in American schools have passed in several states and more than 100 bills have been proposed since last year, according to the free expression group PEN America.

Jeremy Young, senior manager of the Free Expression and Education program at PEN America, said the textbook rejections in Florida raise questions on whether decisions are being made based on teaching or politics.

"The rejections come in the midst of a multipronged effort to undermine faith in public schooling, and invoke terms that have become buzzwords for justifying censorship, but which remain vague and ill-defined," Young said. "Math textbooks' merit should be evaluated in terms of how effectively they help students learn mathematical concepts."

The law states instruction in schools must be "factual and objective." It specifically prohibits "theories that distort historical events" -- including "the teaching of Critical Race Theory, meaning the theory that racism is not merely the product of prejudice, but that racism is embedded in American society and its legal systems in order to uphold the supremacy of white persons."

Florida also banned teaching material from the 1619 Project, the New York Times' Pulitzer Prize-winning project to reframe American history around the date of August 1619, when the first slave ship arrived on America's shores.

The highest number of books rejected were for grade levels K-5, where an "alarming" 71% were not appropriately aligned with Florida standards or included prohibited topics, the release said.

Despite rejecting 41% of materials submitted, every core mathematics course and grade is covered with at least one textbook, the release said.

In a statement, DeSantis said he is grateful for the department's thorough vetting of these textbooks to ensure they comply with the law.

"It seems that some publishers attempted to slap a coat of paint on an old house built on the foundation of Common Core and indoctrinating concepts like race essentialism, especially, bizarrely, for elementary school students," the governor said.