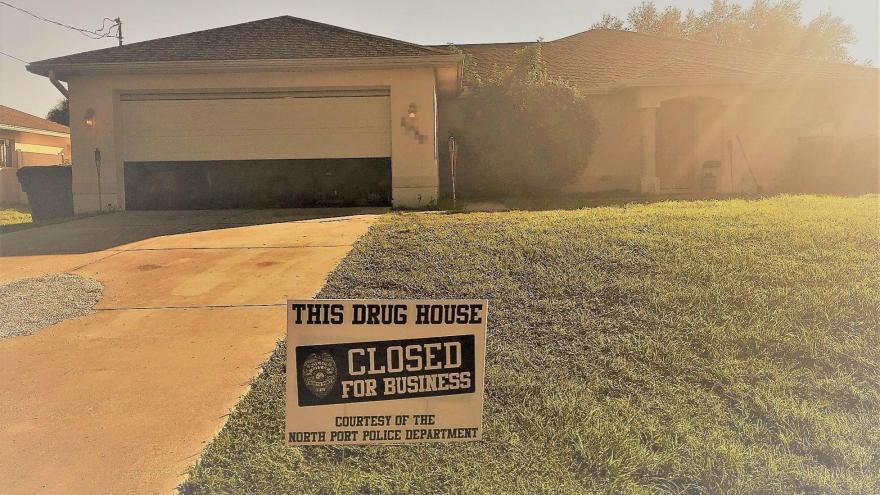 The North Port Police Department in Florida posted this sign outside of an alleged drug house.

(CNN) -- The North Port Police Department wants their community to know that drugs are not welcome in their town as they crack down on "drug houses."

Similar to real estate agents, the NPPD has begun posting signs in front of alleged drug houses that they have shut down. The sign reads: "This drug house closed for business courtesy of the North Port Police Department."

The NPPD tells CNN that this is the first time that they have used this type of sign, but they are not the first -- they learned of the practice from the Flagler County Sheriff's office.

NPPD posted the initial sign in front of a private residence after authorities said they recovered fentanyl, methamphetamine, cocaine, prescription pills and cannabis.

"Throughout the years many tips have come into the NPPD regarding this house and its occupants," NPPD spokesperson Josh Taylor told CNN.

The NPPD says that they "generally have a very safe community with low crime." However, those types of drug houses stick out. Less than a dozen drug houses are closed down every year in North Port, according to the NPPD.

"I think it's a relief," a neighbor tells CNN affiliate WPTV. "Me, I just moved here, and I thought it was a really peaceful neighborhood. The next thing you know, I wake up and I see that."

The signs not only serve as a warning to would-be criminals, authorities said, but they also let the community know that police are hard at work to keep them safe.

"Our intent is to let those who might visit these homes and more importantly these neighborhoods understand that we know what goes on there and they might not want to visit," Taylor said.

"Don't sell drugs in North Port. You think you are getting away with it while we are just building our case. We will see you soon."