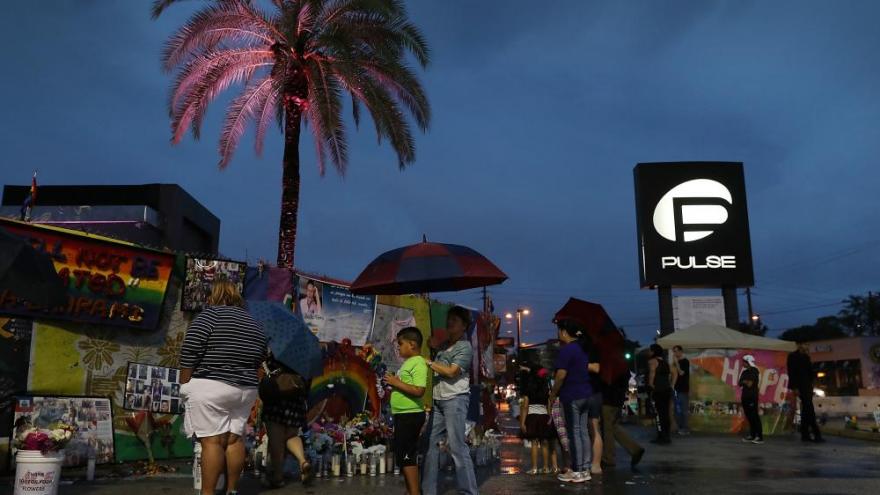 (CNN) -- Four years ago on June 12, 2016, one of the worst mass shootings in US history claimed 49 lives at a Florida gay bar. This morning, people across the state will observe a moment of silence to honor those who were lost.

Florida Gov. Ron DeSantis signed a proclamation declaring June 12 "Pulse Remembrance Day," in memory of those killed during a mass shooting at Pulse nightclub, a popular LGBTQ+ venue in Orlando in 2016.

The proclamation orders all flags to be lowered to half-mast, and Floridians are asked to mark the date with a moment of silence at 9 a.m. DeSantis declared Pulse Remembrance Day in 2019, too, and former Gov. Rick Scott did the same in 2018.

In the early hours of June 12, 2016, 49 people were shot and killed and 50 others were injured. The shooting occurred during the club's Latin Night, and many of those killed were Latino and LGBTQ+.

The gunman, Omar Mateen, died in a shootout with police the same day. Authorities said he had pledged allegiance to ISIS.

The incident was the deadliest mass shooting in the U.S. until one year later, when 58 people were murdered at a Las Vegas country music concert.

The Pulse shooting is still the deadliest act of violence against LGBTQ+ people in the US.

The remembrance of the Pulse nightclub shooting comes as violence against LGBTQ+ people persists.

Transgender people, especially black transgender women, face a heightened level of violence. In 2019, at least 26 trans Americans were killed, according to the Human Rights Campaign. This year so far, at least 12 trans people have been fatally shot. There are likely many more deaths that go unreported, the organization said.

Pulse was considered a refuge for LGBTQ+ Floridians until the tragedy. The club hasn't operated since the shooting, but the site where it stands has turned into a makeshift memorial until a permanent memorial is constructed.

The design for the memorial will include a reflecting pool that surrounds the Pulse building and a garden with 49 trees, one for each victim. A museum and "education center" will operate about one-third of a mile from Pulse, the foundation behind the memorial, onePulse, said.

The permanent memorial is planned to open in 2022.

In June 2019, Florida lawmakers proposed a plan to designate the Pulse site a national memorial, which would make it one of the few LGBTQ+ landmarks in the country. The bill was last debated in March.