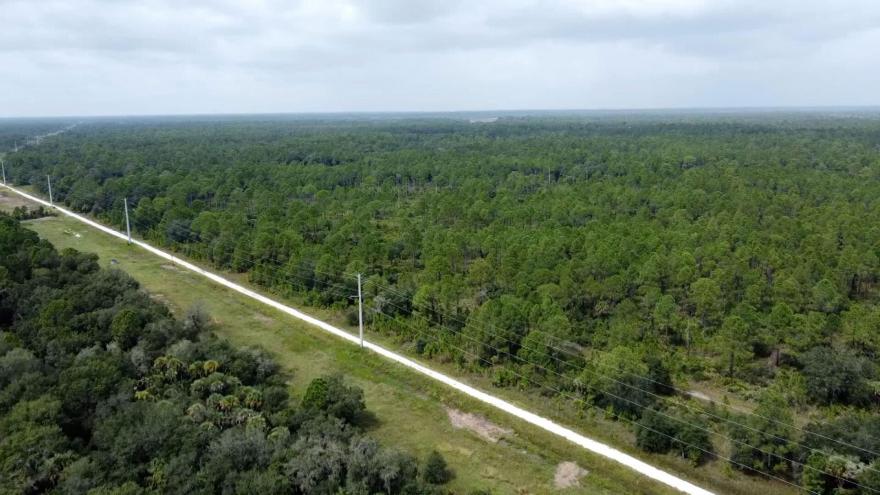 (CNN) -- For more than a month, investigators spread out across a sprawling, swampy Florida nature area known as the Carlton Reserve in search of Brian Laundrie, the missing man whose fiancée Gabby Petito was fatally strangled.

The investigators waded through near chest-high waters. They rode on swamp buggies and air boats and called in underwater dive teams to explore the reserve's 25,000 acres. And they tried to avoid the many poisonous snakes, gators, palmetto bugs and swarms of mosquitoes that call the swamp home.

On Wednesday, a team of searchers, including Laundrie's parents, finally found what they had been looking for: suspected human remains, as well as a backpack and notebook belonging to Laundrie, according to the FBI.

The identity of the remains is not yet clear, but Laundrie family attorney Steven Bertolino said "the probability is strong that it is Brian's remains." A source close to the investigation told CNN that the suspected human remains "appear to have been there a while."

The suspected remains were found "about 2 to 3 miles inside the Carlton Reserve, or about a 45-minute walk" from the entrance at Myakkahatchee Creek Environmental Park, a connected nature area, North Port police spokesperson Josh Taylor said.

The discovery came at an area of the reserve that had been underwater, but recently dried out due to clearer weather, and had reopened to the public a day earlier. The search remains ongoing as teams of K-9 dogs and law enforcement continued to comb for any more evidence.

"These are very, very difficult conditions," he said. "You're searching in areas that you just can't walk up and look. It's not like you're searching a house or a car. These areas are huge and they're covered by water."

The challenging landscape of the Carlton Reserve has hampered the search for Laundrie as investigators have tried to pin down what happened to him and Petito on their road trip through the Western US this summer.

Petito, 22, disappeared on the trip amid tensions in their relationship, and Laundrie, 23, returned by himself to his parents' home in Florida on September 1.

Her parents, unable to get in contact with her, reported her missing 10 days later. Laundrie, meanwhile, declined to speak with authorities and then himself went missing in the reserve, his parents told authorities. Petito's body was ultimately found in Wyoming near where the couple had last been seen, and the Teton County Coroner ruled her death a homicide by manual strangulation.

He has not been charged in her death, although he was indicted for allegedly using two financial accounts that did not belong to him in the days following her killing.

How the Carlton Reserve impacted the search

The search for Laundrie began in earnest on September 17 after his parents told authorities he had gone to the Carlton Reserve with a backpack days earlier and did not return home.

Since then, investigators have repeatedly tried to navigate through the foreboding landscape of the reserve.

"The Carlton Reserve is a vast and unforgiving location at times. It is currently (waist) deep in water in many areas," North Port police said in a Facebook post last month. "This is dangerous work for the search crews as they are wading through gator and snake infested swamps and flooded hiking and biking trails."

The search team has included a range of specialized vehicles and personnel for such an environment.

Given those tricky conditions, expert survivalists expressed skepticism that Laundrie was still in the reserve.

Alan McEwen, a cattle rancher and outdoorsman who lives near the reserve, told CNN last week the area feels like "muck," with parts of the reserve reaching knee- and waist-deep water levels -- making camping in that wilderness extremely difficult.

"The palmettos out there alone are enough to trip you up, when you're walking through them, when you stumble through them," McEwen told CNN's Chris Cuomo. "The mosquitoes will carry you off, anybody out there more than a day without mosquito spray, you'd go insane with the bugs getting you and everything else."

In an ABC interview earlier this month, Laundrie's sister, Cassie Laundrie, said he had previously taken trips for up to five days on the Appalachian Trail. She said her brother is a "mediocre survivalist."

Robert Urban, founder and chief instructor of the Urban Survival Academy, said he believes it's highly unlikely that someone who is not professionally trained in survival tactics would be able to survive in the reserve for this long.

"Florida's climate is very, very difficult," Urban told CNN. "I'm an expert with plenty of experience, and it would be everything that I could do to survive for (more) than three weeks. Someone with no experience, you cannot be lucky and survive in that sort of climate."