A backpack with baby gear led police to a devastating discovery 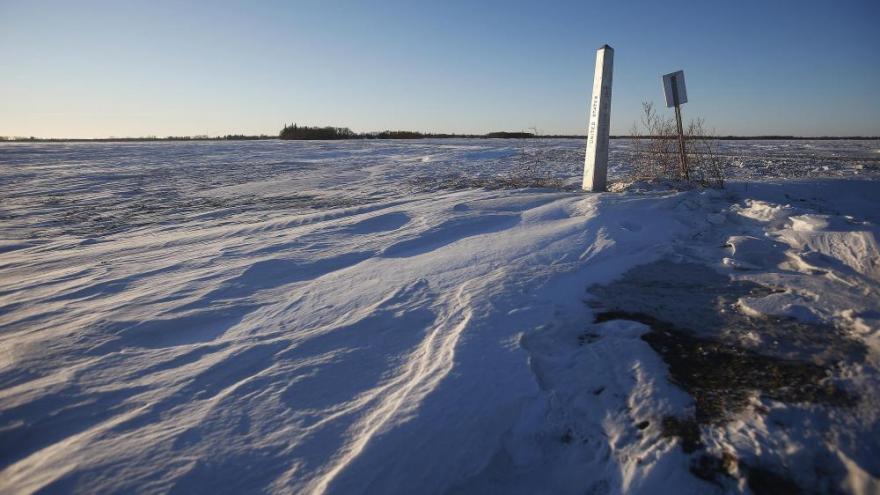 A Florida man was arrested near the US-Canada border and charged with human smuggling.

(CNN) -- A backpack containing baby gear uncovered during a human smuggling investigation in Minnesota helped lead police to a devastating discovery near the US-Canada border.

Authorities found the remains of four people, including an infant, in a field near Emerson, Manitoba, the Royal Canadian Mounted Police told reporters Thursday. Investigators believe they froze to death while attempting to reach the United States, police said.

Their remains were found yards away from the border, police said, and an autopsy is pending.

"It is an absolute and heartbreaking tragedy," RCMP Assistant Commissioner Jane MacLatchy said.

A search began Wednesday morning, MacLatchy said, after police received what she described as "concerning information" from US Customs and Border Protection about a group of people who'd been apprehended after crossing into the United States from Canada.

"One of the adults was carrying items meant for an infant, but ... no infant was found with the group," MacLatchy said.

The bag contained a diaper, toys and medicine

A man in the group, an Indian national identified in a US federal court filing as "V.D.," told investigators the backpack he was carrying belonged to a family who'd gotten separated from the group.

The backpack, according to the Thursday filing, contained children's clothes, children's medication, a diaper and toys.

"V.D. said that he was carrying the backpack for a family of four Indian nationals that had earlier been walking with his group," says the complaint, which was filed in US District Court for Minnesota. "V.D. said that his group had been separated from the family during the night, and he did not know where the family was."

That information sparked a search that swiftly began on both sides of the border, MacLatchy said. The remains -- a man, a woman, an infant and another male believed to be a teenager -- were found hours later, she said, noting that Canadian investigators were still working to identify them.

"Please understand that it's going to take time to identify the names, ages and nationalities of these deceased victims," she said. "You'll also note that I'm using the term 'victims.' And that's on purpose."

Investigators, she said, are concerned the attempted crossing "may have been facilitated in some way."

"We're very concerned...that these individuals, including an infant, were left on their own in the middle of a blizzard, when the weather hovered around -35 degrees Celsius (-31 Fahrenheit), factoring the wind," she said. "These victims faced not only the cold weather, but also endless fields, large snowdrifts and complete darkness."

The terrain was so remote and rough, MacLatchy said, that search teams had to use all-terrain vehicles to access the area.

"It's hugely difficult. Blowing snow covers things up in minutes. The snow is deep. it's almost impossible to walk through," she said. "Evidence can certainly be lost in those sorts of conditions... It's enormously challenging."

Police to potential border-crossers: 'Just don't do it'

MacLatchy told reporters she had a message for anyone else who's thinking of crossing the US-Canada border in the area, either heading south or north.

"Just don't do it," she said. "Do not listen to anyone who tells you they can get you to your destination safely. They cannot. Even with proper clothing, it's not a journey that is possible."

She noted Thursday morning's temperature inthe Emerson area: minus 41 Celsius with the windchill.

"At this temperature, your skin will freeze within minutes," she said. "I do understand that for some there may be a great need to get to another country, but this is not the way. You will be risking your life and the lives of the people you care about if you try it."

An arrest is made as investigations continue

No one has been charged in connection with the deaths. MacLatchy vowed investigators would pursue every angle of the case.

"We don't know how these individuals got to Emerson, but our investigators are certainly going to look into every aspect of their deaths," she said. "As we suspect this group is tied to the individuals found on the US side of the border, we're working in close collaboration with US Customs and Border Protection and the US Department of Homeland Security. All of our agencies are committed to a thorough and a comprehensive investigation."

On Thursday US federal prosecutors announced that a Florida man found traveling in the area on the US side of the border in a van with two undocumented foreign nationals had been charged with human smuggling.

Steve Shand, 47, was arrested by USBP agents Wednesday in the rural area between the official ports of border entry in Lancaster, Minnesota, and Pembina, North Dakota, according to the news release from the US Justice Department.

The two passengers in the van were Indian nationals and were in the US illegally, according to the complaint filed in US District Court for Minnesota.

Shand is charged with one count of "knowing or in reckless disregard of the fact that an alien had come to, entered, or remained in the United States in violation of law, transported, and moved or attempted to transport and move such alien," according to the complaint.

He made his first court appearance on Thursday and was ordered to remain in custody pending a hearing on January 24. Shand's attorney has not yet responded to CNN's request for comment.

Shand has not been charged in relation to the deaths and an investigation is ongoing.

The complaint filed against him in federal court reveals details about the search that led to the discovery.

A complaint describes details of the investigation

The complaint describes a group of five Indian nationals, including V.D., allegedly found and arrested in the area as Shand and the van's passengers were being transported to the Pembina Border Patrol Station.

V.D. told investigators the group had been walking for about 11.5 hours and had walked across the border expecting to be picked up by someone, the complaint says. He also described the family of four that he said had been separated from the group.

The complaint says the Border Patrol received word from Canadian authorities about the remains found north of the border.

"The dead bodies were tentatively identified as the family of four that was separated from V.D.'s group in the night," the complaint says.

Two people were taken to the hospital

Authorities said the frigid temperatures had taken a toll on members of the group that had been taken into custody.

Two people had to be taken to the hospital for suspected frostbite, and one of them, a woman, may lose part of her hand, the complaint said.

Meanwhile, the complaint says there's an ongoing investigation into a larger human smuggling operation that Shand is suspected to have participated in.

One of the Indian nationals told Border Patrol agents that he had paid a significant amount of money to enter Canada from India under a fraudulently obtained student visa, according to the complaint.

He added that he didn't intend to study in Canada, the complaint says, but had planned to enter the US illegally and had crossed the border on foot expecting to be picked up by someone who was supposed to drive him to his uncle's home in Chicago.