Florida is being overrun with iguanas. Homeowners are now allowed to kill them 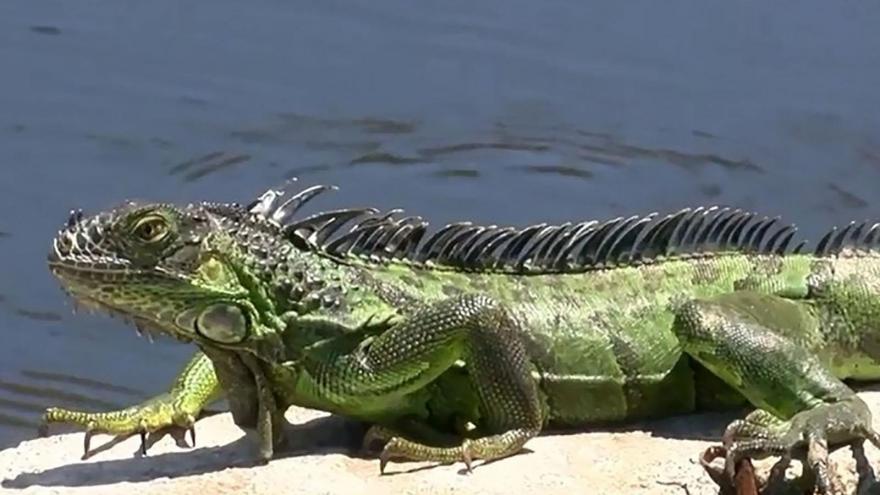 Now add iguanas to that mental picture. Lots of them.

That's the reality in the Sunshine State, where homeowners are now encouraged to kill green iguanas they find on their properties, a statement on the Florida Fish and Wildlife Conservation Commission's website reads.

The declaration follows an exponential increase in recent decades in sightings of the large lizards as their sheer numbers have caused more and more problems for residents.

They're seen all over the state

Green iguanas are considered an invasive species -- they're not native to Florida but come from Central and South America -- by the wildlife commission.

Solid tallies of exactly how many iguanas are in Florida are hard to come by, but the wildlife commission says public sightings of the lizards have grown increasingly common since the 1960s. Once only seen in Miami-Dade County, the spiked reptiles can now be found in much of the south and southwest parts of the state, as well as some parts of the panhandle.

They're thriving in Florida because of the state's subtropical climate, its ever-growing human population (which inadvertently provides the lizards with plenty of shelter and food) and a lack of natural predators. The only thing keeping them from spreading north is the relatively colder weather.

Homeowner Mike Espada said iguanas are so numerous at his Broward County home that he sometimes can't get through his front door.

"Some days we come home, there's 20 to 30 of them all over the property," he told CNN affiliate WPBF. "They're in our courtyard, and so we actually have to find a different door to get in the house. We've become the guests. They're the residents now."

Floridians who don't feel comfortable killing the iguanas can also call someone to trap the animals and get them off their property.

They do a lot of damage

Iguanas can do a lot of damage. They eat plants and dig tunnels that can erode and collapse sidewalks, seawalls and the foundations of homes, the wildlife commissions said. Their droppings can be found almost anywhere, including on sidewalks, porches, patios, decks and inside swimming pools. They can also transmit salmonella.

Iguanas mostly eat plants, but they sometimes consume animals, like snails and certain kinds of butterflies, thereby posing a threat to native and endangered species.

Homeowners are encouraged to take steps to make their properties less appealing to iguanas by removing dense thickets of vegetation that the lizards can use as cover, filling in holes to discourage burrowing and even spraying them with a water hose to make them leave.