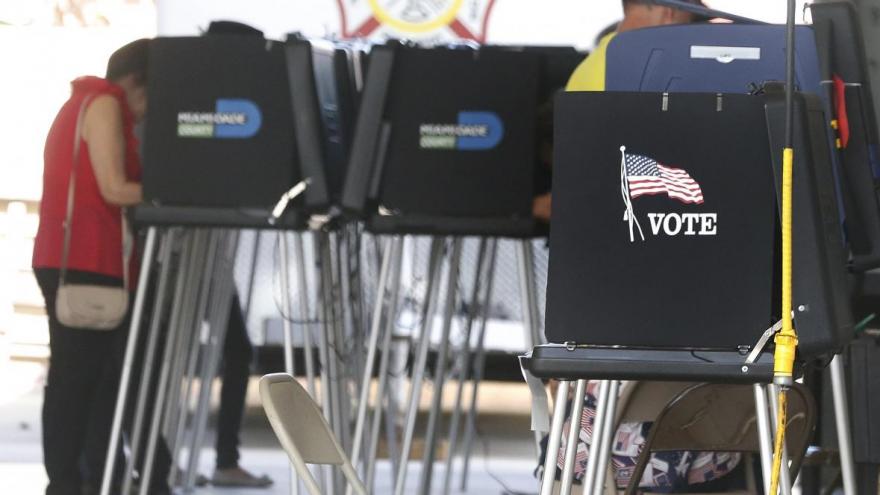 The Florida House Friday passed a bill that would require ex-felons in the state, who were granted the right to vote in a referendum last fall, pay all financial obligations before they can head to the polls, a measure that opponents have likened to a "poll tax."

(CNN) -- The Florida House Friday passed a bill that would require ex-felons in the state, who were granted the right to vote in a referendum last fall, pay all financial obligations before they can head to the polls, a measure that opponents have likened to a "poll tax."

The House passed the Senate bill by a party line vote of 67-42 Friday, the last day of the legislative session.

The bill now heads to Republican Gov. Ron DeSantis' desk, and he has 15 days to decide whether to sign the bill, let it become law, or issue a veto. CNN has reached out to DeSantis' office about whether he plans to sign the bill.

In November, Florida voters approved Amendment 4, allowing convicted felons who complete all terms of their sentence, including parole or probation, the right to vote, except those convicted of murder or a felony sexual offense.

The bill, however, would restore voting rights only for individuals who have completed all terms of their sentence -- which includes fully paying restitution and fines or fees ordered by the court, not including fees racked up after sentencing.

The fees and fines that felons are ordered to pay are wide-ranging but significantly high for an individual leaving prison, especially if they're unemployed. They can range from a couple hundred to tens of thousands of dollars, Lisa Foster, the co-director of the Fines and Fees Justice Center, a group that aims to eliminate fees in the US justice system, has told CNN. And in Florida, all the court charges that are unpaid after 90 days are referred to private debt collectors, who are allowed to add up to a 40% surcharge on the unpaid court debt, according to the Brennan Center.

While Republicans have argued that the fees are part of an ex-felon's sentence and are thus obligatory, Democrats and critics of the bill argue that the measure disenfranchises felons from voting and ignores the will of over 5 million Floridians who supported the statewide referendum.

Republican State Rep. James Grant, who sponsored a House version of the bill, told CNN that comparing the bill to a poll tax was "insanity." He called the bill "expressly consistent" with Amendment 4 and said that he expects DeSantis to sign it.

"I think the governor understands that we should provide as much flexibility and opportunity for people to pay their debt to society, which this bill does," Grant said. "But it's not going to pretend that debt that exists is no longer existing."

The bill's opponents disagreed, urging DeSantis to dismiss it.

Andrew Gillum, who narrowly lost the 2018 gubernatorial race to DeSantis, called for the governor to veto the bill, chiding him for receiving less support from Florida voters than Amendment 4.

Desmond Meade, a co-author of Amendment 4 and executive director of the Florida Rights Restoration Coalition, also called on DeSantis to forgo signing Friday's bill in a statement to CNN.

"While today was disappointing, we have not lost sight of the fact that Amendment 4 is LAW," he wrote.

"We are proud of the thousands of Returning Citizens from all over the state and legislators from both parties who worked to improve this legislation, but we are not there," he added. "We call on the Governor to side with the 1.4 million Returning Citizens and insist for better legislation."

The issue has attracted the attention of national Democrats, including 2020 presidential candidate Joe Biden, who tweeted Friday that the bill is "unacceptable" and argued it would "create a modern-day poll tax, suppressing the vote of tens of thousands of Americans."

Although the American Civil Liberties Union of Florida wouldn't comment on potential litigation, the organization said it will "explore all options in order to ensure that the will of the people is carried out."