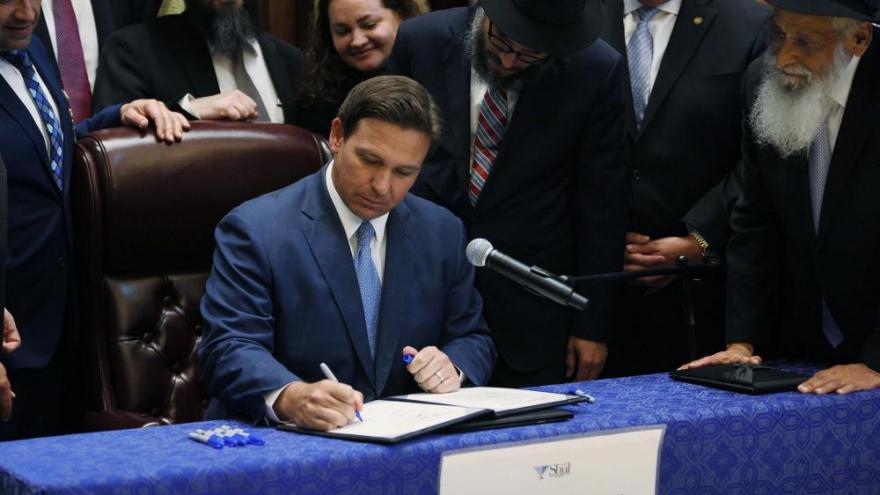 Florida Gov. Ron DeSantis signs two bills at the Shul of Bal Harbour on June 14 in Surfside, Florida. All K-12 public schools in Florida will hold a moment of silence at the start of the day starting next school year, according to a bill signed into law by Gov. Ron DeSantis.

(CNN) -- All K-12 public schools in Florida will hold a moment of silence at the start of the day starting next school year, according to a bill signed into law Monday by Gov. Ron DeSantis.

According to the law, which was HB 529 in the Florida legislature, principals of each public school shall require teachers in first-period classrooms in all grades to set aside at least one minute but not more than two minutes daily for the moment of silence. Teachers may not make suggestions as to the nature of any reflection that a student may engage in during the moment of silence, the law states. A period of "silent prayer or meditation" was optional for school districts in the state prior to the new law.

"It's important to be able to provide each student the ability every day to reflect and be able to pray as they see fit," the Republican governor said before signing the bill at the Shul of Bal Harbour in Surfside, Florida. "The idea that you can just push God out of every institution and be successful, I'm sorry, our founding fathers did not believe that."

The bill was sponsored by Republican state Rep. Randy Fine and passed the state House with a vote of 94-24 in March and the Senate 32-6 in April. The requirement goes into effect July 1.

Opponents of the legislation criticized the bill as requiring prayer in schools, including Democrat State Rep. Omari Hardy who voted against the bill.

"The Republican who sponsored the bill said that it wasn't about prayer in school. (Of course it was!)," Hardy tweeted Monday. "But when you question their motives, or their honesty, it's called a personal attack & deemed out of order. No. The Republicans lie, and we need to call them on it every time."

In January 2020, the Trump administration announced it was updating federal guidance for prayer in public schools and other initiatives aimed at protecting religious freedom, also drawing criticism from nonprofit groups, including the Freedom From Religion Foundation and American Atheists.

DeSantis on Monday also emphasized initiatives to support the Jewish community in Florida, including security funding for the state's Jewish Day Schools, $1.35 million dollars for the Florida Holocaust Museum in St. Petersburg, $400,000 for the Holocaust Memorial in Miami Beach, $100,000 for the Holocaust Task Force and others. He also signed into law HB 805, that ensures faith-based volunteer ambulance services can operate.