Florida Gov. DeSantis hints at future plans: 'I have only begun to fight' 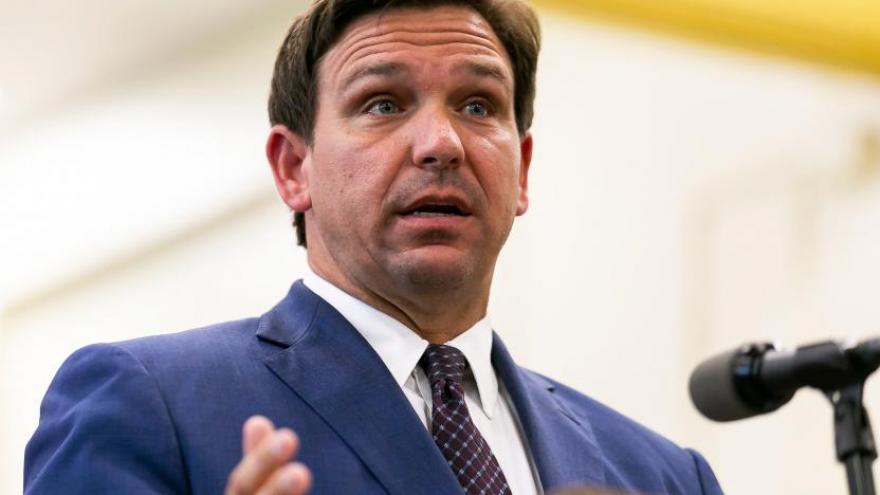 Florida Gov. Ron DeSantis has used his platform to promote his tenure as the leader of the state.

(CNN) -- The applause for Florida Gov. Ron DeSantis from a ballroom full of Republican activists was loud and long -- and it happened before the Florida governor even took the stage.

With more than 40 months before November 2024 and in the key swing state of Pennsylvania, the race for the Republican nomination for president is already underway. And while the 42-year-old governor said nothing concrete about his future plans beyond winning reelection next fall, DeSantis hinted at his ambitions with his final line of the night:

"I can tell you this: in the state of Florida, with me as governor, I have only begun to fight."

Prior to his speech, as the 750 people began eating their salads at the Republican Committee of Allegheny County's annual Lincoln Day Dinner, the mere mention of DeSantis's name by the party chairman prompted cheers. And when a local pastor, in the midst of a lengthy prayer before the meal, said DeSantis would make a great president of the United States, the entire room let up a roar of approval.

DeSantis fired up the crowd during his half-hour address with a slew of applause lines on a number of topics currently animating Republicans and conservatives -- from fighting against "Big Tech oligarchs" and the "corporate media" to opposing defunding the police and banning teaching critical race theory in schools.

He also used the platform to promote his tenure as governor. Citing vague concerns about elections in other states, DeSantis touted a new controversial law he signed in Florida implementing the "strongest election integrity measures anywhere in the country." And he celebrated Florida as the leading state for opening up amid the Covid-19 pandemic.

"All I can say to any state that has not followed suit: Open your state, open your schools, end these mask mandates, let people live and thrive," DeSantis said. "When it came right down to it, we chose freedom over Fauci-ism."

DeSantis criticized the Biden administration for what he referred to as its "weakness" in opposing threats from China. And in one of his few references of the night to the Republican former president, he credited Donald Trump for seeing the Chinese threat "better than anyone."

For the most part, he kept his focus on the upcoming midterm elections, encouraging Pennsylvania to elect a Republican governor. And while DeSantis made only vague references to 2024, the event was an early indication of what the governor's presidential campaign speech might sound like -- if Trump himself stays out of the race.

Since Trump left office, DeSantis is perhaps the most well-known elected official with Republicans. And as his appearance in Pittsburgh shows, he is in high-demand for party committees.

Among the party's conservative base, DeSantis has emerged as an heir apparent to the former President. While Trump easily won this year's Conservative Political Action Conference's unscientific straw poll for the 2024 presidential nomination, a second poll question excluded Trump -- and DeSantis lapped the field of White House potentials with 43% support.

His speech before the crowd of CPAC activists in February rested heavily on a Trumpian theme: that DeSantis fights.

"Now, anyone can spout conservative rhetoric. We can sit around and have academic debates about conservative policy," DeSantis said then. "But the question is, when the Klieg lights get hot, when the left comes after you: Will you stay strong or will you fold?"

A mainstay on Fox News primetime programming, the first-term Florida governor has pushed back forcefully against critics in the media and public-health world of his relaxed approach to the pandemic. After the initial closures in Florida and across the country in spring 2020, DeSantis was among the first governors to begin the limited reopening of certain businesses, some as early as May that year -- a plan he talked over with Trump.

DeSantis refused to issue a statewide mask mandate and even prevented localities from imposing their own mandates. He also did not reimpose restrictions last fall, when other governors slowed down reopening plans as case rates began to rise across the country. It was a record he touted several times in Pittsburgh.

"Your job as a leader is to make decisions," DeSantis said. "You can't subcontract out leadership decisions to health bureaucrats."

But the result for Florida was mixed. Judging strictly by the number of cases and deaths, Florida's Covid response was neither the best in the country nor the disaster feared by public-health experts. Since reaching its peak 7-day average of new reported cases in early January of this year, Florida has seen a steep fall-off in new case numbers, with a short-lived spike in April that soon abated.

The story DeSantis has told, however, is that he stood athwart "oppressive lockdowns" and other restrictive measures that he claims would have done more harm than good. He crowed about Florida's example in an email fundraising appeal in March.

"Everyone told me I was wrong," he said earlier this year. "I faced continued pressure from radical Democrats and the liberal media, but I refused to back down. It's clear: Florida got it right."

Fighting against the media

In Pittsburgh, DeSantis railed against what he deemed a "very corrupt and partisan corporate media" and hailed his own victory last month over one news program that he felt had unfairly targeted him.

In April, CBS News's "60 Minutes" ran a report about Florida's vaccination program and drew attention to a recent $100,000 donation that Florida-based supermarket chain Publix made to DeSantis' reelection bid.

The story suggested there was a possible link between the donation and the state's partnership with Publix stores for vaccine distribution. But, beyond spotlighting the public finance records, "60 Minutes" never offered any substantive evidence to support the significant assertion and link the donation with the partnership.

Both Publix and Florida Democratic officials involved with the vaccination program later came out to dispute the suggestion of the "60 Minutes" report, while conservative media rallied to DeSantis' side. It's become a talking point for the Florida Republican and a way to position himself as a fighter against out-of-touch elites in the media and elsewhere.

"I had people writing in from all across the country from my office, saying what a farce it was," DeSantis said in Pittsburgh. "And they were so happy to have somebody who is willing to stand up."