Florida family mourns the loss of hero pit bull, who died protecting their children from a venomous snake 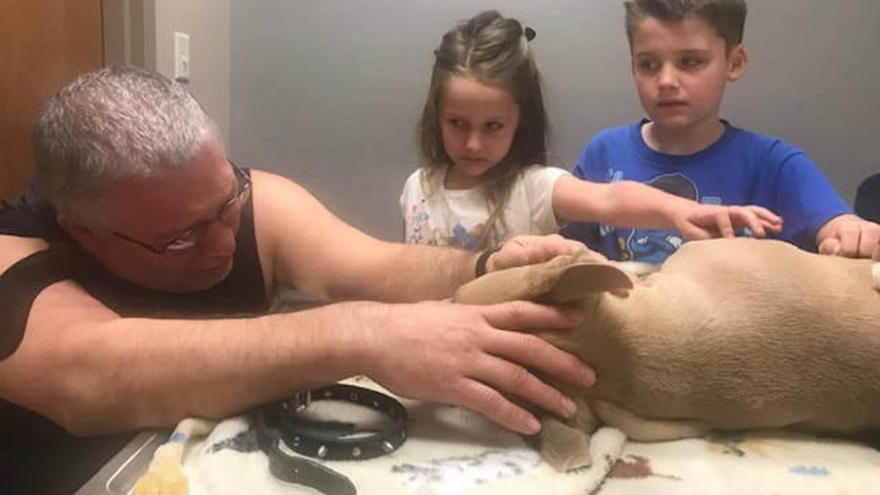 Gary Richardson and two of his children, Aurora, 6, and and Owen, 8, say goodbye to Zeus after he died protecting Oriley and Orion.

(CNN) -- A Florida family is mourning the loss of their puppy Zeus, who died while protecting two of their four children from a venomous snake.

Oriley Richardson, 10, was playing in his family's backyard in Webster on September 23 when the 9-month-old pit bull suddenly jumped towards him, his mother Gina Richardson told CNN on Sunday. Oriley noticed the pup attacking something on the ground, but thought it was a rope.

It was a coral snake. And Zeus was doing his best to keep it away from Oriley.

As the dog struggled to keep the snake at bay, Orion, 11, stepped into the backyard to change Zeus' water.

That's when Zeus decided to lay down on the snake, using his body weight to smother the deadly predator and prevent it from harming the boys.

Orion noticed that Zeus' eyes looked "bugged out," Richardson said. That's when they turned him over and discovered the snake, which had bitten Zeus four times before he bit off and swallowed its head.

The family rushed Zeus to a nearby animal hospital, where staff immediately administered anti-venom.

Sadly, it was too late. Zeus died the following day -- the same day as Oriley's birthday.

"I just started bawling," Richardson said. "My kids woke up and heard me crying and then they too started crying. We were all an emotional wreck."

The family, including Sega, Zeus' mom, went to the hospital to say goodbye.

"Sega goes over to Zeus' head and puts her paws up on the table and takes a sniff," said Richardson. "Her ears came back, she got down, she instantly jumped on the sofa next to me and put her head on my thigh in sorrow. At that moment not only was my family broken, but his own mother was broken."

Richardson said she feels "forever grateful" to Zeus and considers him a hero. "I feel like I may have lost one of my children had he not been there," she said.

Oriley is especially saddened over Zeus' death. "He was a good boy and I loved him with all my heart," he said. "I played with him all the time. I feel sad and I miss him."

"He was my best friend," said Gary Richardson. "I'm torn between wanting to be happy that this situation has brought awareness to his breed and their kind and loving nature, and the sorrow of having lost him."