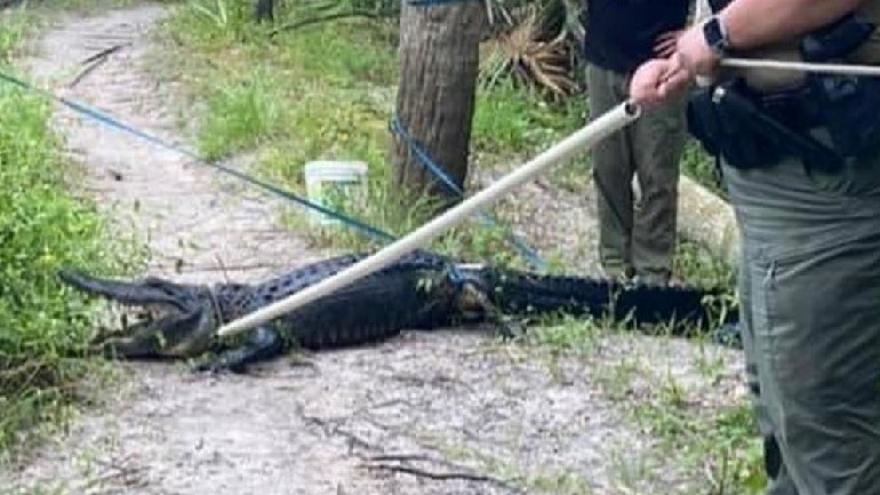 (CNN) -- A cyclist was bitten by an alligator and suffered severe injuries after he crashed his bike and fell into the water in a Florida park, according to the Martin County Sheriff's Office.

The man lost control of his bike on Monday on a trail in Halpatiokee Park in Stuart, and fell down a six-foot embankment into the water near a female alligator, the sheriff's office said in a news release that also was posted on social media.

The alligator, which authorities said was about 9-feet long, grabbed the man and caused serious injuries before he was able to get free and crawl to an area where he got help from a bystander, according to the release.

Charlie Shannon told CNN affiliate WPTV that he was walking his dog in the park when he saw the injured cyclist.

"He had a lot of marks all over his leg, but mainly in the upper thigh," Shannon said to WPTV.

Shannon told WPTV that he used his dog's leash as a makeshift tourniquet as he and other bystanders pulled the man to safety.

"He was hanging on roots like five feet below," Shannon told WPTV. "It was hard to get him out."

The sheriff's office, Martin County Fire Rescue and Florida Fish and Wildlife officers responded to provide aid and secure the scene, according to the release.

Rescuers had to drive the victim more than a mile from the trail to an area of the park where a medical helicopter could land, the release said. Video from the sheriff's office showed him being loaded into the helicopter.

Alligator trapper John Davidson was called in and captured the alligator a short time later, and WPTV reported that the animal would be relocated.

"She was sitting 10 feet off the bank when I showed up," Davidson told WPTV. "That leads me to believe that she was a female and sitting on a nest somewhere close. So we'll attempt to rescue the babies if we can."

The Florida Fish and Wildlife Conservation Commission (FWC) is leading the investigation, the sheriff's office said.

The FWC says that there are about 1.3 million alligators in Florida and they live in all 67 counties in the state.

Attacks on humans are very rare, according to the agency.

There were 12 alligator bites of humans in 2020 and none were fatal, according to the FWC.