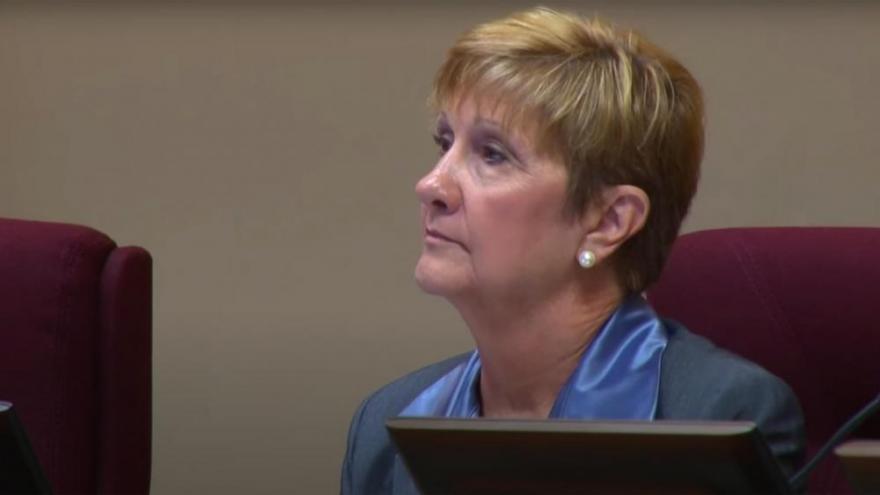 (CNN) -- A Manatee County, Florida, commissioner broke protocol for equitable vaccine distribution, which she had previously voted in favor of, when planning a vaccine drive initiated by Gov. Ron DeSantis.

Vanessa Baugh admitted on Thursday that she "wanted to make sure certain people were on the list" for vaccination after emails revealed that she directed county officials to create a list to let her and others jump the line. In response to criticism that county officials had only permitted residents from the two richest zip codes in the county to get vaccinated at the event, Baugh further admitted that she picked the zip codes herself.

In a public county commissioner meeting on Thursday, Baugh apologized for the criticism regarding the "pop-up" vaccination site, but said that if presented with the opportunity again, "I will do exactly what I did this time." Baugh further explained that she "did exactly what (DeSantis) wanted" in organizing the vaccine drive.

On Tuesday, in another public county commissioner meeting, Baugh said that the vaccine drive was initiated by DeSantis, a Republican, and involved real estate developer Rex Jensen. A news release on the Manatee County website says it aimed to vaccinate 3,000 people over three days.

One of the emails obtained by CNN through a public records request states that Baugh asked county workers to pull a list of potential vaccine recipients from only two zip codes, who would then participate in the state-sponsored vaccine drive.

"Commissioner Baugh has asked we pull a list of those in the vaccine waiting pool that have listed 34202 and 34211 as their residence," Manatee County Public Safety Director Jacob Saur wrote on February 12.

Although Baugh directed county employees to deviate from the protocol, she and the rest of the commissioners voted in favor of it unanimously on January 6.

In a Tuesday public county commissioner meeting, County Administrator Cheri Coryea confirmed that in the planning for the governor's pop-up drive, she told Baugh that they should use the random pool and not pick and choose people by zip codes. One of the emails obtained by CNN through a public records request indicates that the county is continuing to use the randomized pool.

A separate email, also obtained by CNN through a public records request, shows that Baugh didn't stop there. It shows on February 15 she also directed that she, Jensen and three others be allowed to cut the line.

A source that was briefed on how the planning process was carried out called it a "VIP list." Also, two of the individuals on that VIP list lived outside the two zip codes that Baugh mandated. All five individuals on the list were qualified to get the vaccine but by adding them to the VIP list, Baugh guaranteed they would skip the line by giving them appointments.

The Bradenton Herald was first to report on the emails.

Although DeSantis said that the choice of zip codes "was a choice about where's a high concentration of seniors," Baugh made it clear that she was behind the decision.

"It was my idea," Baugh said at the ?Wednesday meeting, but did not offer an explanation for her rationale.

"I think instead of everyone seeming to have an issue, we need to realize it's 3,000 people that are now going to be removed from our registry, which will open it up hopefully sooner to all of those that are left," she said.

Although Baugh utilized county personnel and resources for the drive, fellow county commissioners said in Tuesday's public meeting that they were not consulted or notified about the pop up. They only found out about it through the local newspaper.

CNN reached out to Baugh for comment but did not receive a response.

Lisa Barnott, spokesperson for Jensen and Lakewood Ranch, told CNN in a statement that their involvement in the clinic was only "to help identify a site that could accommodate 1,000 people per day."

"(Baugh) coordinated the use of the site, as well as use of the Manatee County registry of people who had signed up for vaccinations," Barnott went on to say in the statement.

Barnott did not respond to inquiries about Jensen being included on the so-called VIP list.

Manatee County had previously been lauded by DeSantis for their effectiveness at vaccinating people and standing up one of the first drive-thru vaccination programs in the US. Now, the governor threatened to withhold additional doses from the county after the person that he largely put in charge to run it -- Baugh -- was criticized. DeSantis has not criticized Baugh or her methodology in organizing his vaccine drive.

"If Manatee County doesn't like us doing this, then we are totally fine with putting this in counties that want it," DeSantis said.

CNN reached out to DeSantis' press office for comment and has not received a response.