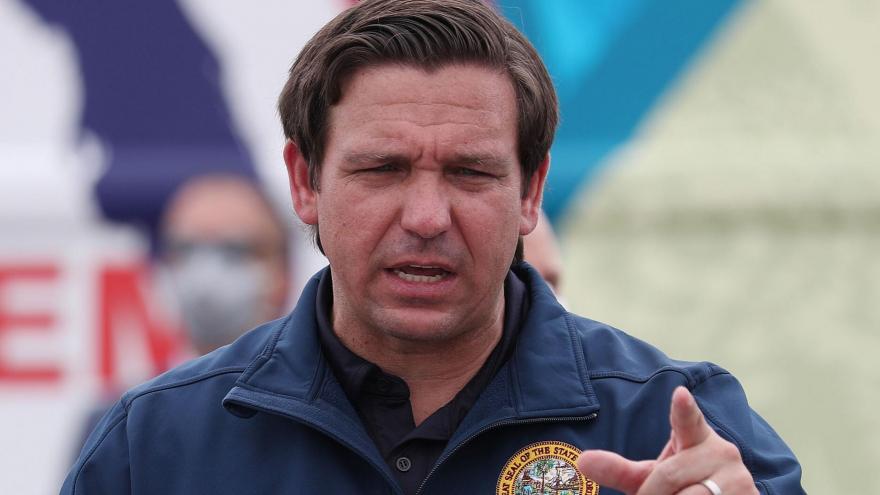 Florida became the eighth state to ban transgender girls and women in public secondary schools and colleges from participating on girls' and women's sports teams after its Governor, Ron DeSantis pictured on May 6, 2020 in Florida, signed the measure into law.

(CNN) -- Florida became the eighth state this year to ban transgender girls and women in public secondary schools and colleges from participating on girls' and women's sports teams after its Republican governor signed the restrictive measure into law on Tuesday.

The action by Gov. Ron DeSantis comes during a record-breaking year for anti-trans bills in statehouses across the country and was taken on the first day of Pride Month, an annual celebration of the LGBTQ community that takes place throughout June, and 11 days before the five-year anniversary of the deadly Pulse nightclub shooting, in which 49 people were killed at a popular LGBTQ venue in Orlando.

LGBTQ advocates quickly denounced the move, with one group vowing to mount a legal challenge.

Under the law, public secondary school and college sports teams are required to be designated based on "biological sex," thus prohibiting trans women and girls from participating on women's athletic teams.

The bill defines a student's "biological sex" as the one that was printed on the student's official birth certificate at or near the time of birth.

While sex is a category that refers broadly to physiology, a person's gender is an innate sense of identity. The factors that go into determining the sex listed on a birth certificate may include anatomy, genetics and hormones, and there is broad natural variation in each of these categories.

For this reason, the language of "biological sex," as used in this legislation, can be overly simplistic and misleading.

The law also allows a "student who is deprived of an athletic opportunity or suffers any direct or indirect harm as a result of a violation" of the ban to take legal action and permits a student "who is subject to retaliation or other adverse action by a school" for reporting a violation of the ban to sue the school.

"We believe that it's very important that the integrity of those competitions are preserved, that these opportunities are protected, and I can tell you this: In Florida, girls are going to play girl sports and boys are going to play boy sports," DeSantis said at an event for the bill's signing that included a group of female athletes in the state.

Florida is the eighth Republican-led state to enact such a sports ban this year, the Human Rights Campaign told CNN. South Dakota, Mississippi, Arkansas, Tennessee, West Virginia, Montana and Alabama are the others.

Asked by a reporter at the event what message he's sending by signing the bill on the first day of Pride Month, DeSantis replied: "It's not a message to anything other than saying we're going to protect fairness in women's sports."

The new law is already being met with opposition from Democrats in the state, with the Florida Senate Democratic Caucus saying in a statement following DeSantis' signing that the law is an open attack on vulnerable LGBTQ children.

"By folding the transgender ban into the charter school legislation, Republicans in Tallahassee rejected both science and reason, openly attacking vulnerable LGBTQ+ children without a single shred of evidence that a problem even exists," they said, adding: "Not once has there been an incident or complaint in our state alleging that a transgender athlete's participation unfairly impacted middle school, high school or college athletic competition."

LGBTQ advocates blasted the governor's decision, with the Human Rights Campaign saying it plans to mount a legal challenge to the ban.

"All Floridians will have to face the consequences of this anti-transgender legislation -- including economic harm, expensive taxpayer-funded legal battles, and a tarnished reputation," Human Rights Campaign President Alphonso David said in a statement. "In Florida, we are ensuring that there are legal consequences to pay for being on the wrong side of history."

The NCAA has come out in opposition to such bans, saying in April that it's closely monitoring them to make sure NCAA championships can be held "in ways that are welcoming and respectful of all participants."

But DeSantis shrugged off potential boycotts of the state by the NCAA and other corporations that oppose the ban, saying at Tuesday's event that such groups "are not going to dictate the policies in this state."

"We will stand up to groups like the NCAA who think that they should be able to dictate the policies in different states. Not here, not ever," he said.

In opposing such bans this year, Democrats have pointed to the NCAA's decision in 2016 not to host the Final Four in cities that enforce anti-LGBTQ measures. The body's policy came after North Carolina approved a measure that required people to use the public restrooms that corresponded with the sexes on their birth certificates -- a rule that was later repealed, resulting in the NCAA ending its own ban.