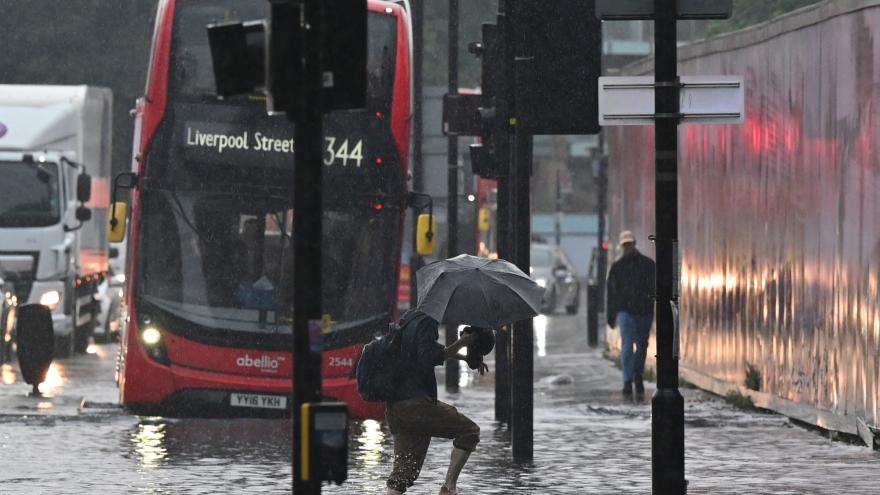 The now-familiar scenes of a city inundated by floods played out in London over the weekend, when heavy rainfall put parts of the UK capital underwater.

When two London hospitals turned non-emergency patients away after getting flooded over the weekend, it was a brutal reminder that even some of the world's richest cities are dangerously unprepared for the kind of extreme weather that is becoming more common and more severe because of climate change.

Climate and infrastructure experts have been warning for years that London, like many other large cities, isn't ready for climate change, with large parts of the city built on a flood plain and a Victorian drainage system that is unable to withstand this kind of intense rain.

"It's deeply concerning that we're seeing hospital emergency departments having to close because they flooded, something certainly needs to be done to make sure that critical infrastructure is not at risk," said Liz Stephens, associate professor at the department of geography and environmental science at the University of Reading.

According to the Greater London Authority, 17% of London is facing either high or medium risk of flooding, with more than 1 million Londoners live in a flood plain.

The city has built a giant flood defense system on the river Thames to protect itself from tidal flooding, but the barriers are of little help when it comes to flash flooding caused by sudden heavy rainfall -- the sort that is becoming more common because of rising temperatures.

Images from Sunday showed Londoners taken by surprise, wandering through flooded streets. Some even attempting to drive away through the rising water, which officials warn against because of the high likelihood for automobiles to be swept away, or for the drivers to become trapped.

The London Fire Brigade said Monday it took over 1,000 emergency calls related to the flooding with crews rescuing people from cars and helping them flee their homes.

While these images of people not taking the risk seriously are concerning, Stephens said individuals were hardly to blame here.

"Our ability to map the risk of surface water flooding is not particularly good," Stephens said. He noted UK's surface water flood risk maps have not been improved significantly since 2013, even though more precise technology is available and despite the fact that numerous reports have been published that emphasize the increasing risk.

On top of that, the way flood risk is monitored and managed in the UK is extremely complicated, with different bodies responsible for different parts of the effort and no single body in charge.

The Met Office, the UK's national weather service, issued weather warnings for heavy rainfall and thunderstorms on Sunday, but Stephens said these may not be immediately understood by people.

"I think there was an amber warning which tells you that that there could well be severe impacts, but the amber warning covered a very large area of southeast England," said Stephens. "So really as an individual, what would you do with that kind of information. If you don't know that your property is at risk of flooding, and you've got some very broad scale flood warning, or not even a flood warning, a warning of intense rainfall, then I don't think we can be surprised if people are unprepared for it," she said.

A report into the impacts of climate change on the UK published last month by the government's independent climate advisory group, the Climate Change Committee, warned the country was not ready, saying that "adaptation action has failed to keep pace with the worsening reality of climate risk."

"The risk is always greater in the urban environment because we've got concreted surfaces, but we're also relying on an old drainage infrastructure in London, we're talking about Victorian drains," Stephens said.

Images like those coming from London on Sunday are becoming worryingly familiar.

Just two weeks ago, devastating floods caused by heavy rains swept across large parts of western Europe, leaving more than 200 people dead and thousands homeless. On the other side of the world, much of China's central Henan province was left devastated after record rains there last week, killing at least 58, cut off power and forced the relocation of more than 1 million people.

And while it is not possible to attribute a single event to climate change, heavy rains and floods are becoming more common. As the Earth's atmosphere warms, it can hold more moisture, which can lead to unprecedented rainfall. It may be that the total average rainfall in an area doesn't change, but extremes are amplified, which can mean longer dry periods or more intense storms. When heavy rain hits after prolonged drought, the soils are less able to absorb the water and the rain is more likely to result in flooding.

Urban areas are at higher risk of flash flooding because surfaces are covered with concrete, which means the ground cannot absorb any water. According to the European Environmental Agency, Paris, Thessaloniki, Bucharest and Barcelona among the cities with more than three quarters of their surface area "sealed," meaning they are at higher risk of surface flooding.

On top of that, many European cities rely on very old infrastructure, and sewage systems cannot cope with heavier rainfall.

"Summer thunderstorms are not a new occurrence, but it is becoming ever clearer that the worsening impacts of flooding from intense rainfall are having devastating effects here in the UK and across Europe," Jess Neumann, a hydrologist at the University of Reading, said in a comment to Science Media Center. "The severity and frequency of flooding is a stark warning that we are not prepared to deal with climate change."