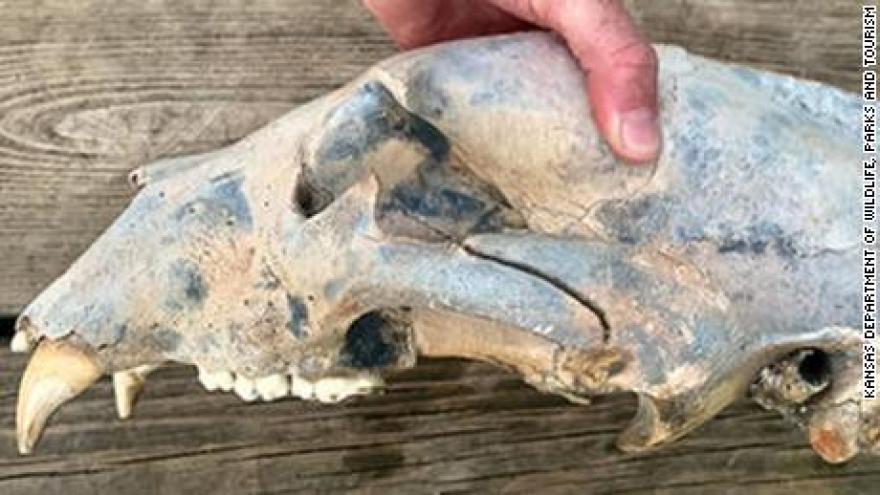 The public got its first look at actress Felicity Huffman's life in prison as photos and a video taken Saturday showed her walking in a green prison uniform.

(CNN) -- Two sisters kayaking on the Arkansas River this summer made a historic find — a huge bear skull that is hundreds if not thousands of years old.

The skull is believed to have been preserved in the sands of the river until it was displaced by major flooding this year.

Ashley and Erin Watt were kayaking down the river in south-central Kansas in August when they saw the skull protruding from a sandbar, the Kansas Department of Wildlife, Parks and Tourism said. When they pulled it out, they saw the skull had massive teeth, some the diameter of a human thumb.

The sisters posted the find on Facebook, where it drew the attention of a wildlife department game warden. He shared the pictures with paleontologists from the Sternberg Museum of Natural History in Hays, Kansas.

The skull is about 16 inches long and 8.5 inches wide and has a fossilized appearance, which led the paleontologists to wonder whether it was from a modern grizzly or a more primitive species, the wildlife department said.

"The bear skull was washed out of the same river sediments that routinely produce the skulls and bones of the American bison, some of which could date back as far as the last Ice Age," said Mike Everhart, one of the Sternberg paleontologists who examined the skull.

"Whether it is hundreds or thousands of years old, the skull gives us a better insight into the richness of life on the plains before Western man," Everhart said.

The most likely scenario is that the skull is from a more modern species, the wildlife department said, based on the excellent condition with only a few minor teeth missing.

If it's verified to be a grizzly skull, it would be the first physical evidence of the animal in the state, according to the University of Kansas. Historical reports suggest the animal was common, especially in areas near rivers, streams and nearby ridges, but the species was wiped out in Kansas in the mid-1800s, the university and wildlife department said.