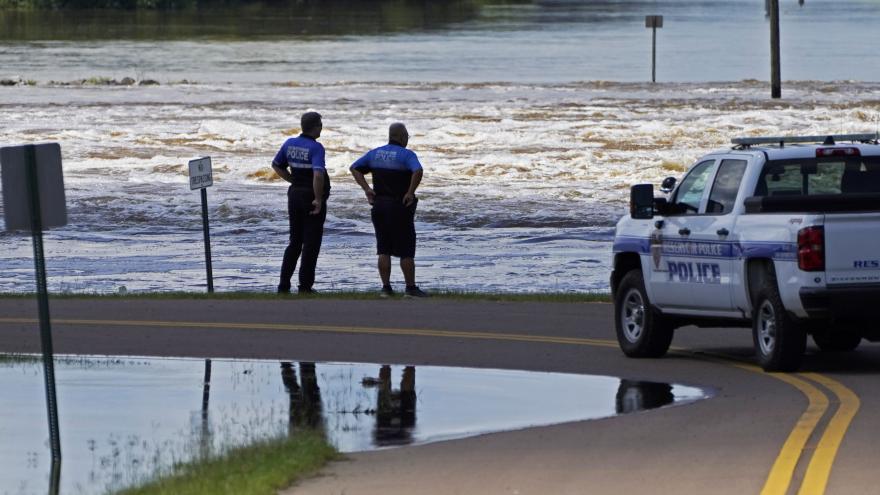 (CNN) -- City officials in Jackson, Mississippi, are "cautiously optimistic" Monday as the Pearl River appears to be cresting after record-setting rain without water spilling into residents' homes, according to a spokesperson for the mayor.

The city -- still dealing with the toll of historic flooding in 2020 -- was bracing for damage, with as many as 150 homes expected to be impacted by flooding, Jackson Mayor Chokwe Antar Lumumba said Saturday, telling residents to "get out now."

But despite the flooding, there were "no reports of water in any homes" Monday, Melissa Payne, the mayor's spokesperson, told CNN.

"The shelter remains open for those who are concerned about the water ... but we expect to see the water falling over the next couple of days," Payne said.

The river was predicted to crest Monday morning at 35.5 feet -- just shy of major flood stage, which is 36 feet at this point along the river, according to the United States Geological Survey. But as of late Monday morning, the river had been sitting around 35.35 feet for several hours.

Some roads around schools and neighborhoods on the northeast side of Jackson were impassable Monday morning, according to a CNN team there. But the water was receding in the area, according to Hinds County Emergency Operations Deputy Director Tracy Funches.

Communities facing the highest risk were the same ones affected by the flood more than two years ago in February 2020 -- hence the dire warnings from authorities -- when the Pearl River reached its third-highest crest on record at 36.7 feet, flooding several neighborhoods in northeast and downtown Jackson, damaging some homes beyond repair and leaving extensive amounts of debris.

Jackson resident Shawn Miller's home suffered $60,000 in damage during the 2020 flood, he told CNN, and it cost thousands more to relocate his family for five for six months on his own dime.

Miller thought his family took the right precautions to prevent water from coming in, he said, but it wasn't enough.

"You can't control it. I had 50 sandbags, and it didn't do nothing," Miller said, adding he "came back and still had about a foot in the water damage inside the home."

Water was once again on the street outside his home Sunday, and he was wary.

"It's a little bit concerning," Miller said. "You cut the power off, you're leaving the house, you pretty much have to pick up and leave. You no longer have a home ... you just got to come back and hope for the best."

While river levels this week aren't expected to reach the same levels as 2020, Lumumba told CNN it is not a reason to underestimate the threat.

The Ross R. Barnett Reservoir inflows crested Sunday morning, but "there is still a lot of water that must flow downstream," according to a Sunday release from the Pearl River Valley Water Supply District. The 33,000-acre reservoir provides water to Jackson and is upstream of the city.

"Water will be in several streets in Jackson and could begin approaching some homes and businesses," water district officials said.

A city more prepared this time

Mississippi Gov. Tate Reeves declared a state of emergency Saturday due to the rising river waters and urged residents to remain calm. The state began work assessing water levels along the river using drones and deployed more than 100,000 sandbags, according to the declaration.

"The state of Mississippi is as prepared as possible for this flooding," Reeves said.

Authorities prepared for potential search and rescue operations, clearing areas of debris, distributing sandbags to residents, and providing public transportation to help with evacuations, according to Lumumba.

The mayor said officials were better equipped this time around and able to better instruct residents on how to prepare for the flood by taking pictures of their property and locating their critical documents.

Miller agreed government officials did a better job informing residents of the flooding threat than in 2020, when he was surprised to come home to find water coming down the street and his neighbor packing up.

More rain is becoming 'commonplace' and it's taking a toll, mayor says

"Our residents have been inundated with persistent rain over the last few days. So we already have been contending with flash flooding, and so it is quite a toll on our residents," Lumumba said.

Flood warnings remain in effect until further notice along the Pearl River, including in Jackson, Mississippi, according to the National Weather Service office in Jackson.

By Sunday evening, the river levels were at 35.28 feet and were on track to crest at 35.5 feet Monday morning. At that height, water would be flooding some Northeast Jackson streets close to the river as well as dozens of streets in downtown Jackson, and approaching homes in the Hightower area, according to NWS.

"Quite honestly this has become commonplace. We're experiencing more rain in our rainy season, hotter summers and colder winters, and it has taken a toll on our infrastructure," Lumumba said.

Scattered showers and thunderstorms remain in the forecast for the Jackson area and much of the southern states Monday, according to CNN Meteorologist Haley Brink.

The good news is additional widespread flooding is not expected across this area over the next several days despite scattered thunderstorms being in the forecast. However, some storms could bring bouts of isolated heavy rain, Brink said.