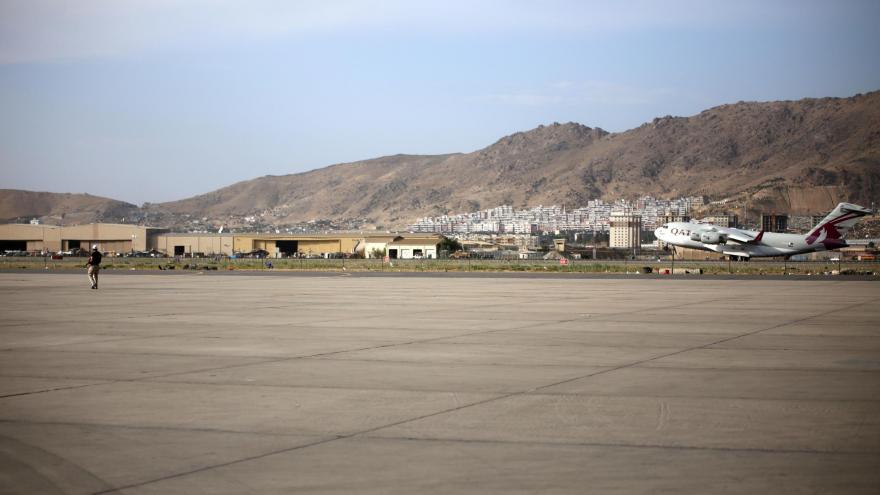 (CNN) -- A commercial flight took off from Kabul airport on Thursday for the first time since the Taliban seized Afghanistan, hours after the militants cleared a group of Americans and other foreign nationals to leave the country.

It is unclear at this stage how many Americans were on board the Qatar Airways flight, reported earlier to be bound for Doha, or the nationalities of the other passengers.

A US official and a source with knowledge of the matter had earlier said the Taliban had agreed to allow around 200 people, including American citizens, to leave Afghanistan.

Several passengers waiting to check into the flight earlier said their final destination was Canada. "We are going to Canada, we are Canadians," one man told an Al Jazeera Arabic reporter at the airport in English. Another two men also said they were bound for Canada.

A Qatari technical team has been in the country for the past 10 days, helping Afghan officials restore airport operations.

An engineer on the Qatari team told a news conference Thursday that the airport was now 90% fixed. "There are some technical issues that we cannot fix, but in total all the equipment is working," said Mohamed Naeemi, speaking alongside Al-Qahtani.

Al-Qahtani called the resumption of commercial flights at Kabul airport "historic" but said the process of reopening would be gradual. Other flights have landed carrying humanitarian aid, he added.

A US official told CNN that the Taliban's agreement for the 200 or so people to leave on the charter flight Thursday came after US Special representative for Afghanistan Zalmay Khalilzad had been pressing the Taliban to allow departures.

US Secretary of State Antony Blinken on Wednesday blamed the grounding of charter flights in Mazar-i-Sharif, northern Afghanistan, on the Taliban, saying that the militant group was not allowing them to leave.

The Taliban claimed "that some of the passengers do not have the required documentation," Blinken said.

CNN has reached out to the White House, the US National Security Council and the Taliban for comment on Thursday's developments. The US State Department declined to comment.

The last US military planes left Kabul's airport just ahead of an August 31 deadline, marking the full withdrawal of American forces. That landmark moment came only two weeks after the Taliban seized control of the capital.

By the time the US completed its withdrawal, more than 122,000 people in total had been flown out of Kabul airport since July and more than 6,000 Americans civilians evacuated.

Taliban spokesman Zabihullah Mujahid said Monday that progress on getting Kabul airport "back to normal" had been held up by the damage done to radar facilities.

"The Americans had damaged the radar and it takes time to repair," he said, adding that the US had "deliberately destroyed definite parts of the airport."

Turkish Foreign Minister Mevlut Cavusoglu said Tuesday that Ankara also was working with Qatar and the United States on keeping the airport in Kabul operational.

"We currently have 19 technicians on the ground there working. But the most important point is who ensures security?" Cavusoglu said in an interview with Turkish private broadcaster NTV.

"Outside the airport, it could be the Taliban but inside (the airport) it needs to be a private company or a state or two that the international community can rely on. If the presence of a military is unwanted, there are private companies that can do this kind of work."