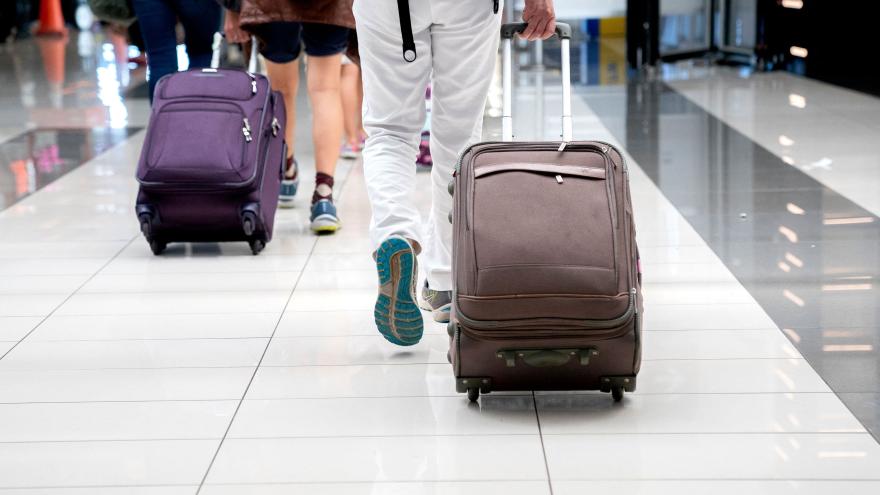 (CNN) -- There appears to be no end of trouble in sight for flyers this week -- a chaotic July Fourth weekend has spawned more than 1,100 cancellations since Friday as airlines grapple with staffing shortages and poor weather amid an abundance of passengers.

More than 7,800 US flights were delayed Friday -- including 45% of JetBlue's operations and almost a third of United, American Airlines and Southwest's operations. Delta also saw a quarter of its operations delayed.

Thunderstorms in the Northeast Friday afternoon were to blame for causingdelays of an hour or more at some of the region's major airports, according to the Federal Aviation Administration's flight delay map.

Delays have eased up Saturday, however,withat least 2,200 flights delayed in the United States and 578 cancellations. Delays were concentrated in New York-area airports, according to FlightAware data.

CNN has reached out to airlines for comment. United Airlines has waived change fees for travelers affected by Northeast thunderstorms and severe weather in Denver and Houston.

Airlines were bracing forholiday weekendcrowds at levels not seen since before the pandemic. Delta offered customers free flight changes with no fee difference for those traveling between July 1 and 4.

So far this year, US airlines have canceled 3.5% of flights, up 42% over 2019, according to Department of Transportation data.

Washington is stepping up the pressure. Transportation secretary Pete Buttigieg tweeted July 1 he is "engaging airlines daily to make sure they are ready," and reminded customers they are entitled to cash refunds for canceled flights -- a rule requirement he "will continue to enforce."

Bernie Sanders said that he wants the DoT to fine airlines up to $27,500 per passenger for delays.

"The airline industry got $50 billion in taxpayer money in its time of need," he tweeted Friday. "What did Americans get in return? Disruptions, delays, and cancellations."

"US airlines always strive to provide a seamless travel experience and are making every effort -- including trimming schedules -- to help ensure smooth travel," Airlines for America (A4A), an industry group representing major US air carriers, said in a statement after a call with the FAA Thursday to make plans for anyweather disruptions over the long weekend.

Off-duty Delta pilots, represented by the Air Line Pilots Association, picketed at the carrier's hubs on Thursday to protest the slow progress of contract negotiations. They're demanding improvements in pay, retirement and job protections -- as well as changes to pilot schedules to avoid disruptions caused by "preventable management missteps."

"When delays or cancellations happen, the pilots share in our passengers' frustration. As long-term stakeholders in our airline, seeing our operational reliability suffer is bad business and puts the Delta brand at risk," said Capt. Jason Ambrosi, chair of the Delta ALPA Master Executive Council in a release.