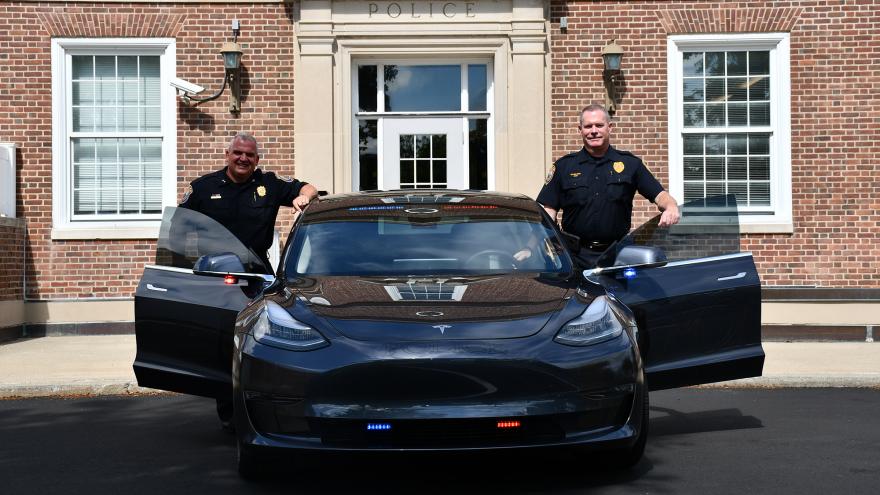 (CNN) -- Westport, Connecticut police chief Foti Koskinas would love it if his patrol cars could drive themselves, but his department isn't buying Teslas equipped with "full self-driving."

Local governments like Westport and businesses big and small sing the benefits of electric vehicles like Teslas. Westport has saved thousands on fuel and maintenance since purchasing a Model 3 in 2019.

Westport has saved nearly $7,000 a year on fuel and maintenance costs, he said. There could be more savings coming. Westport expects to save $5,000 a vehicle if it can use Tesla's on-car computer, rather than installing its own for critical features like scanning license plates, controlling lights and sirens, and radioing colleagues. Discussions are on-going between Westport and Tesla, Koskinas said.

But for all their Tesla enthusiasm, there's one feature they overwhelmingly aren't touching — "full self-driving." Some say the technology isn't ready yet.

The $10,000 optional software feature includes driver-assist features that Tesla hopes will one day allow the cars to drive themselves. (The price is likely to increase, as it has in the past, so the best time to buy is likely now, for those who believe in the technology's future.) Not all Teslas have "full self-driving." Currently, "full self-driving" is available in Beta form and has only been released to a limited group of people. It can change lanes in some cases, respond to most traffic signals and steer the car.

The technology is far from perfect and requires an attentive driver behind the wheel to take control at a moment's notice. It "may do the wrong thing at the worst time," Tesla warns.

Koskinas can envision the benefits if his department's cars could be trusted to drive responsibly, always doing the right thing. He said officers responding to incidents sometimes end up riding in an ambulance to a hospital, to offer support. But they must leave their patrol car behind.

"How great if that vehicle drives itself to the hospital and meets the officer there?" he said.

If Teslas could do that, he might buy "full self-driving," he said.

"We're just not there," Koskinas said of the technology today. The "full-self driving" option can be added to Teslas in the future even if it is not purchased at the time of sale.

Westport, Connecticut is one of six police departments that told CNN Business that they have purchased at least one Tesla, but not the "full self-driving" feature.

Police departments aren't the only ones taking a pass.

Hertz announced in October it will purchase 100,000 Teslas, but not "full self-driving." Brightline, the private train operator in Florida, has a Tesla fleet of nearly 50 vehicles to give passengers rides to its train stations, which reopened this month. Revel, a mobility startup, started using Tesla Model Ys to offer rides in Manhattan this year.

Most of the Tesla buyers decline to say why they are not buying "full self-driving." But the technology's limits appear clear and are likely a factor.

Thilo Koslowski, a consultant at AutoDGTL focused on automotive technology, told CNN Business that "full self-driving" is not currently a good value for fleet operators, given the technology's limits and its cost.

"They're not gaining the benefits they're looking for," Koslowski said. "It's not full self-driving. It becomes a question of if it's worthwhile to spend the money."

Fleet operators could theoretically face liability risks if "full self-driving" would be active during a crash, according to Koslowski.

"That risk overshadows any potential benefits you could get from this," Koslowski said. "It's such a murky gray area that I think the risk is way too high for rental companies to do that."

The technology's limitations have been documented. Tesla drivers testing "full self-driving" have described it as inconsistent, sometimes impressing them, other times alarming them. Videos shot by drivers using Teslas with "full self-driving" show that it can brake and turn unexpectedly, and sometimes drive down the middle of the road rather than making space for other drivers.

Several Teslas using "full self-driving" have crashed into curbs, damaging the cars' wheels. A person who identified themselves as a Tesla owner reported to the National Highway Traffic and Safety Administration this month that their Tesla had been severely damaged after crashing into a vehicle while using "full self-driving." The agency is seeking more information about the crash, according to spokesperson Lucia Sanchez.

Even Tesla CEO Elon Musk has alluded to the limits of "full self-driving."

"We need to make full self-driving work in order for it to be a compelling value proposition," he said on a Tesla earnings call this summer.

At the time he also questioned the merits of paying for a subscription version of "full self-driving." Then drivers with "full self-driving" were receiving a limited set of features, like automated lane changes.

"Like right now, is it -- does it make sense for somebody to do [full self-driving] subscription? I think it's debatable. But once we have full self-driving widely deployed, then the value proposition will be clear," Musk said.

Tesla has repeatedly missed deadlines on when it expects its autonomous system to be widely deployed and has not issued a recent estimate for a broad deployment of "full self-driving."

Tesla did not respond to a request for comment and generally does not engage with the professional news media.