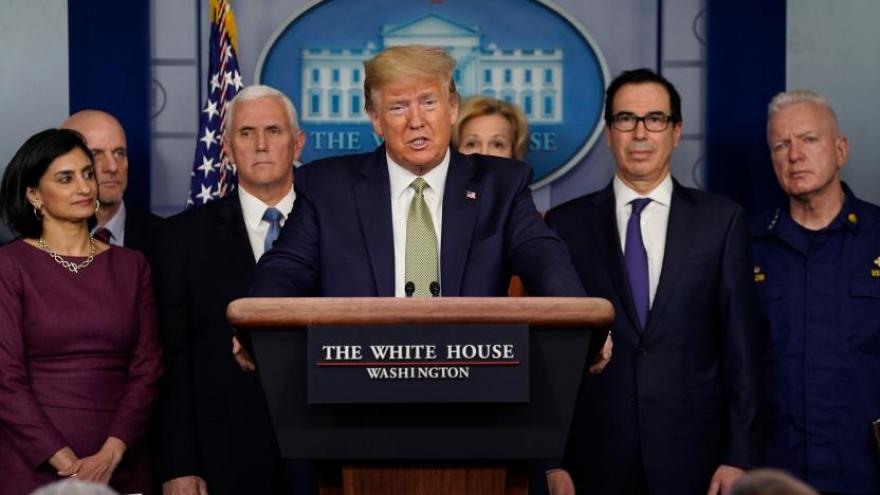 (CNN) -- President Donald Trump wants to quickly put more money in Americans' pockets to help soften the economic blow many will face as the coronavirus disrupts life across the nation.

"We don't want people losing their jobs or not having money to live, when they were doing very well just four weeks ago," Trump said at a press conference Tuesday. "So we're going big, and that's the way it'll be."

While the President had been pushing a payroll tax cut, he's now come around to the idea of sending checks to Americans as part of a massive economic stabilization package. The figure being discussed is $1,000, though it's still early in the process and Congress must weigh in.

Providing direct stimulus payments is not a novel idea. In fact, the last president to do so was also a Republican -- former President George W. Bush mailed out checks during the recessions of 2001 and 2008 to mitigate economic pain.

Bush opted to provide this type of stimulus in 2001 and sent even larger checks in 2008, as the Great Recession bore down on the nation. Roughly 130 million households received tax rebates in the latter effort, with single Americans getting up to $600 and couples up to $1,200, at a cost of about $100 billion. Certain parents received $300 for each minor child. The rebate phased out at higher income levels.

And Americans did spend that money, said Claudia Sahm, director of macroeconomic policy for the left-leaning Washington Center for Equitable Growth and a former Federal Reserve economist. Research shows that individuals spent 50% to 90% of 2008 rebate within three months.

While the idea of sending out a fresh round of payments has critics, it's also supported by people across the ideological divide. Republican Sen. Mitt Romney of Utah unveiled a $1,000 payment proposal on Monday, while Michael Strain, director of economic policy studies at the right-leaning American Enterprise Institute tweeted that the administration is "absolutely right to get people cash --- and to get it to them in the next week, if possible."

A backstop, not a solution

No one argues that a $1,000 payment will completely insulate Americans from the economic shock of the coronavirus, but it can help, especially alongside other programs to expand unemployment benefits, bolster the safety net and support companies, especially small businesses, experts said.

"It's kind of a backstop," Sahm said, especially for those who may lose their jobs, have their hours reduced or get sick. "For a lot of Americans, that's more of a financial buffer than they have. People will notice it."

Also, Sahm said, it should give people some confidence.

"Americans need to know right now that the government has their backs," she said.

Another plus is that sending checks is something that can be done pretty quickly, unlike other fiscal supports for the economy, said Michael Feroli, chief US economist at JP Morgan.

"It's a good way to get the process rolling," said Feroli.

To be sure, the current situation is not like other times of economic upheaval. People are being told to stay home, and many stores, restaurants and entertainment venues are closed.

But they also still need to buy groceries, pay the rent and cover their car payments -- so when the crisis is over, they can get to work, said Randall Akee, non-resident fellow in economic studies at The Brookings Institution.

"There are household expenses that people are very concerned about," he said. "That's why this cash payment is crucial."