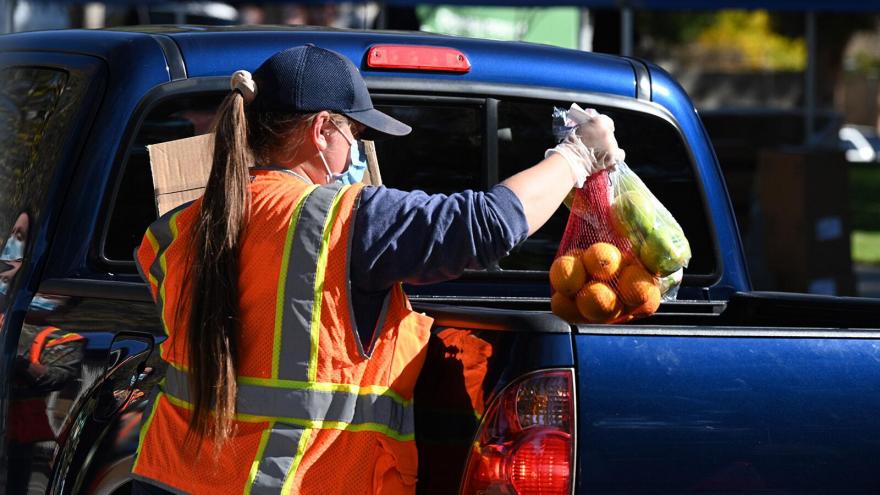 Volunteers load free groceries into cars for people experiencing food insecurity due to the coronavirus pandemic.

(CNN) -- Millions of Americans expect to lose wages in the next four weeks.

As the coronavirus surges again across the nation, the fragile economic recovery is showing more cracks. The pace of job growth has slowed and more people are filing for unemployment for the first time.

After weeks of negotiations, Congress is preparing to vote on a fresh stimulus package. Lawmakers are looking at providing another round of stimulus checks, temporarily boosting jobless payments again and extending two key pandemic unemployment programs.

Here's how things are getting tougher for Americans.

Nearly 8 million more Americans have joined the ranks of the poor since June, according to researchers from the University of Chicago and University of Notre Dame.

The poverty rate jumped to 11.7% in November, up from 9.3% in June. That's nearly double the largest annual increase in poverty since the 1960s.

The poverty rate is increasing even though the unemployment rate fell by 40% over the same period. This disconnect between the two is not surprising since some government benefits have expired, including a $600 federal boost in jobless payments, the researchers said.

The decline in poverty over the first six months of the year was due to the one-time stimulus checks distributed in the spring and the historic expansion of unemployment benefits, the researchers found in an earlier study.

Just under 27.4 million adults, or 12.7%, were in households where there was sometimes or often not enough to eat in the last seven days, according to the most recent Census Household Pulse Survey, which covers November 25 to December 7.

Some 19.4% of Arkansas residents suffered from food scarcity, but only 6.4% of Maine residents did. The unemployment rates in those states were 6.2% and 5.0% in November, respectively.

Among households with children, 17.5% sometimes or often did not have enough to eat in the past weeks, according to the Census data. That compares with 16.1% two weeks prior.

More than 85.4 million adults, or 35.6%, live in a household where it's been somewhat or very difficult to pay for usual household expenses during the pandemic, the Census survey found.

Nevada, which tied for the nation's second highest unemployment rate at 10.1%, had the highest share of folks who had trouble meeting their expenses at nearly 45%.

In South Dakota, less than 25% of residents were in that situation. The state has one of the lowest unemployment rates at 3.5%.

Falling behind on rent or mortgage

Nearly 13 million adults, or 9.1%, are not current on their rent or mortgage, or have slight or no confidence that they can pay next month's housing bill on time, according to the Census data.

Louisiana, where the unemployment rate was 8.3% in November, had the highest share of people in this situation, at 15.9%.

But only 2.3% of Montana residents couldn't pay their housing costs. The state's unemployment rate was 4.9%.

Nearly 76.7 million adults, or 31%, expect someone in their household to have a loss in employment income in the next four weeks, the Census survey found.

This story has been updated with details of the stimulus deal reached Sunday.