Five more women, including Bessie Coleman and Maria Tallchief, will appear on US quarters next year 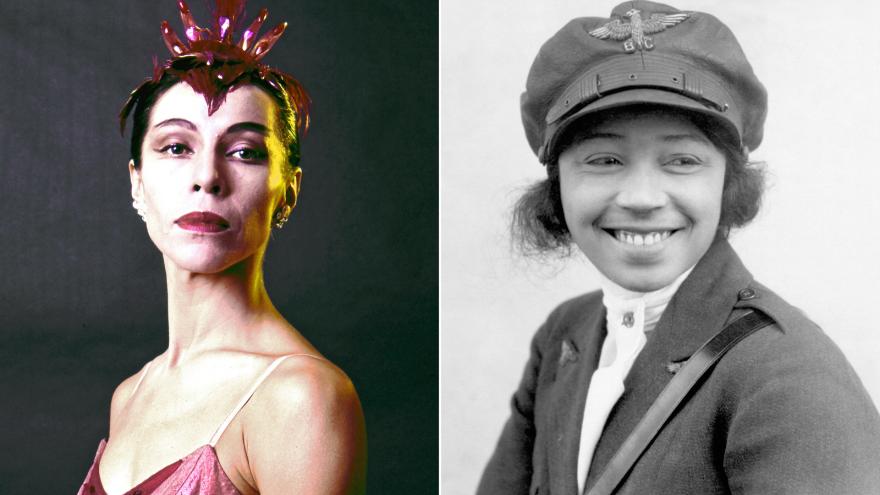 (CNN) -- The US Mint has announced the next five women to appear on American quarters.

After honoring such figures as Maya Angelou and Sally Ride in the first run of its American Women Quarters Program, the agency has selected a new group of pioneering women who will be celebrated on US currency: pilot Bessie Coleman, journalist and activist Jovita Idár, hula teacher Edith Kanakaʻole, former first lady Eleanor Roosevelt andballerina Maria Tallchief.

These five women will appear on the backs of select quarters beginning next year, while the front of the coins will feature a portrait of George Washington designed by 20th century sculptor Laura Gardin Fraser. This year's trailblazers made contributions in fields from aviation to activism to the arts.

Bessie Coleman soared the skies as the first African American and first Native American woman pilot. Though she was rejected from US aviation schools because of her race and gender, she wouldn't be deterred and started learning French so that she could apply to aviation programs abroad (she ultimately earned an international pilot's license in 1921). Her daring spirit also carried over to the air, where she was known for performing loop-the-loops and figure-eights, and she encouraged other women and African Americans to reach for the skies, too.

As a journalist and activist, Jovita Idár spoke out against racism that Mexican Americans faced in the early 1900s, and she didn't back down in the face of intimidation. When the Texas Rangers came to shut down her newspaper after she wrote an article criticizing President Woodrow Wilson's decision to send troops to the southern border, she stood her ground and defended her doors.

Eleanor Roosevelt was one of the most influential first ladies in US history, using her platform to champion causes such as racial justice, women's suffrage and disability rights. She continued her activism even after her time in the White House, going on to chair the United Nations Human Rights Commission and help write the 1948 United Nations Declaration of Human Rights.

Edith Kanakaʻole was an Indigenous Hawaiian hula teacher who helped preserve her native culture and traditions as part of the Hawaiian renaissance of the 1970s. Maria Tallchief, who broke barriers as a Native American dancer, is regarded as the first American prima ballerina.

"The range of accomplishments and experiences of these extraordinary women speak to the contributions women have always made in the history of our country," Ventris C. Gibson, deputy director of the US Mint, said in a statement. "I am proud that the Mint continues to connect America through coins by honoring these pioneering women and their groundbreaking contributions to our society."

Treasury Secretary Janet Yellen selected the 2023 honorees with input from the Smithsonian Institution's American Women's History Initiative, the National Women's History Museum, and the Congressional Bipartisan Women's Caucus, according to the US Mint.

The American Women Quarters Program, which released its first batch of quarters this year, will continue until 2025, honoring five women with five quarters each year.