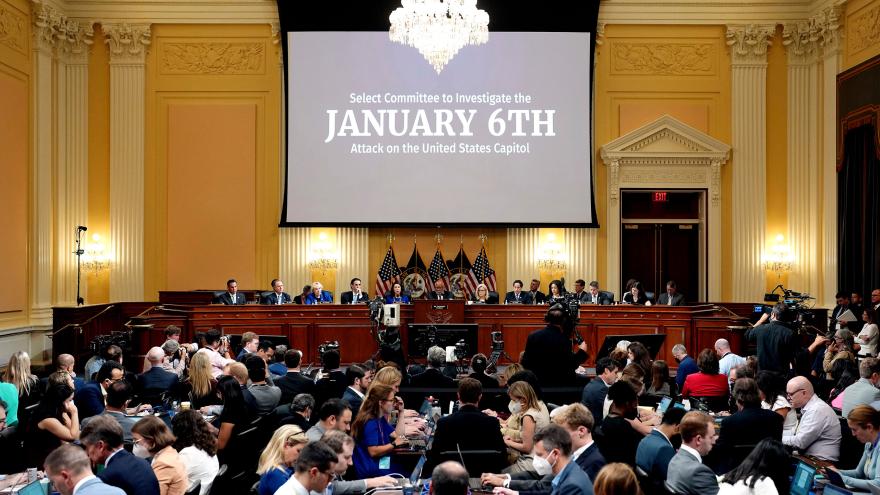 The support staffer was not someone who routinely communicated with the former President and was concerned about the contact, according to the sources, and informed their attorney.

The call was made after former Trump White House aide Cassidy Hutchinson testified publicly to the committee. The White House staffer was in a position to corroborate part of what Hutchinson had said under oath, according to the sources.

The initial revelation about Trump's phone call was made in a dramatic moment at the end of this week's hearing by committee Vice Chair Liz Cheney. Cheney, a Wyoming Republican, revealed that Trump "tried to call" an unnamed witness in the committee's investigation. She said that witness "declined to answer or respond" to Trump's call and instead alerted their lawyer. The committee has since supplied that information to the Department of Justice.

"We will take any effort to influence witness testimony very seriously," Cheney said Tuesday during the hearing.

Rep. Pete Aguilar, a California Democrat who serves on the committee, told CNN on Tuesday that the individual Trump tried to call has been speaking with the panel.

"Trump himself had called someone who has been talking with us," Aguilar said.

A source familiar with the panel's investigation added that the committee has spoken to the person Trump tried to call, but not as part of a deposition.

Mississippi Democratic Rep. Bennie Thompson, the chairman of the committee, told CNN Wednesday that Trump attempting to call this witness was concerning enough to raise it to the Department of Justice.

"From my vantage point, it is highly unusual to do that, and that's why we more or less put that in the hands of the Justice Department, for them to make that decision," Thompson said, when asked if the act of Trump calling the staffer was enough evidence to determine whether he was attempting to intimidate a witness. "We are concerned about witnesses' safety."

This is not the first time the committee has raised concerns about potential witness tampering.

"This has been an ongoing pattern and we're trying to send the message that witness tampering is a crime in the United States of America. People should not be approaching witnesses to try to get them to alter their testimony," Maryland Democratic Rep. Jamie Raskin, who serves on the panel, told CNN on Tuesday.

At the end of the hearing featuring Hutchinson last month, Cheney brought up two examples of possible witness intimidation without naming a witness or who had made contact. Sources have told CNN that both instances recounted by Cheney in that June hearing had been directed at Hutchinson, and that Hutchinson believes the messages were intended to influence her testimony.

In one instance, Cheney said a witness received a call in which someone said: "(A person) let me know you have your deposition tomorrow. He wants me to let you know that he's thinking about you. He knows you're loyal, and you're going to do the right thing when you go in for your deposition."

Multiple sources previously told CNN the witness was Hutchinson and the "person" referred to in the message, which was redacted in the version projected on a screen during the hearing, was former White House chief of staff Meadows.

Ben Williamson, a spokesperson for Meadows, denied that Meadows or anyone in his "camp" attempted to intimidate Hutchinson or influence her testimony.

"No one from Meadows camp, himself or otherwise, ever sought to intimidate or shape her conversations with the committee," Williamson told CNN.

"What they said to me is, as long as I continue to be a team player, they know that I'm on the team. I'm doing the right thing. I'm protecting who I need to protect, you know, I'll continue to stay in good graces in Trump World," Cheney said at the hearing, relaying the witness statement that sources now say is Hutchinson. "And they have reminded me a couple of times that Trump does read transcripts and just to keep that in mind as I proceed through my depositions and interviews with the committee."