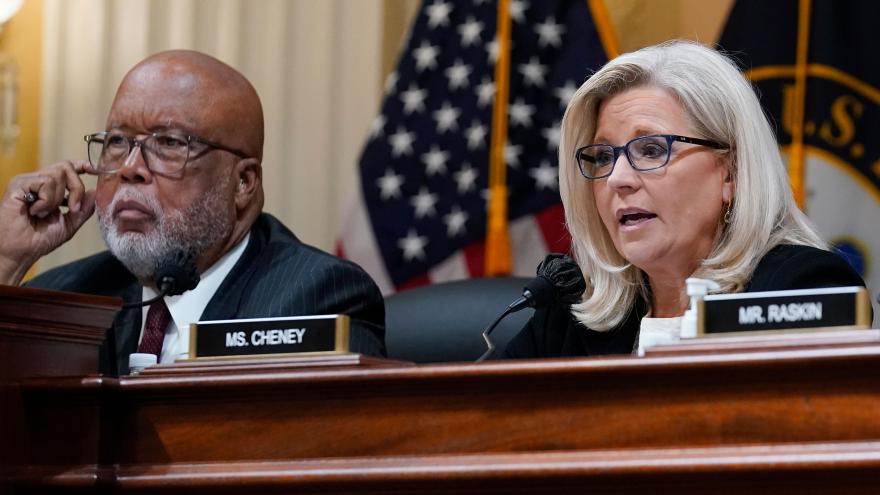 (CNN) -- The Department of Homeland Security inspector general on Friday briefed all nine members of the House select committee investigating the January 6, 2021, US Capitol attack about the Secret Service erasing text messages from the day of the riot and the day before.

The inspector general, Joseph Cuffari, met with the committee behind closed doors two days after sending a letter to lawmakers informing them that the text messages were erased after the watchdog agency asked for records related to its electronic communications as part of its ongoing investigation around the Capitol attack.

The committee now plans to reach out to Secret Service officials to ask about the erasure of text messages from the day of the US Capitol attack and the day before, including the agency's process for cleaning out files to see if that policy was followed, the committee Chair Bennie Thompson told CNN.

January 6 committee members expressed concern after the meeting about the different version of events between the inspector general and Secret Service and stressed they wanted to hear from the agency itself.

Cuffari's description left the impression that the Secret Service had been "footdragging," the source said. The inspector general told the committee they were not getting full access to personnel and records.

Cuffari said he brought the issue to Homeland Security Secretary Alejandro Mayorkas more than once and was told to keep trying to get the information. Ultimately, Cuffari decided to go to Congress because he could not get anywhere within DHS with his concerns. Separately, a law enforcement official told CNN about Cuffari going to Mayorkas.

DHS said in a statement that it "has ensured and will continue to ensure that both the DHS Office of the Inspector General (OIG) and the Select Committee to Investigate the January 6 Attack on the United States Capitol have the information they have requested."

Thompson told CNN the IG said during their meeting that the Secret Service has not been fully cooperative.

"Well, they have not been fully cooperating," the Mississippi Democrat said, adding: "We've had limited engagement with Secret Service. We'll follow up with some additional engagement now that we've met with the IG."

Thompson said that the committee will work "to try to ascertain if those texts can be resurrected."

The congressman previously told CNN after the meeting that the committee needs to interview Secret Service officials to get their take on what happened with the text messages that got deleted on January 5 and 6, 2021.

"Now that we have the IG's view of what has happened. We now need to talk to the Secret Service. And our expectation is to reach out to them directly," Thompson said. "One of the things we have to make sure is that what Secret Service is saying and what the IG is saying, that those two issues are in fact one and the same. And so now that we have it, we'll ask for the physical information. And we'll make a decision ourselves."

Maryland Democratic Rep. Jamie Raskin, who serves on the January 6 committee, told CNN that there seem to be some "contradictory statements" between the Homeland Security inspector general and the Secret Service about whether the text messages from the Secret Service on January 5 and 6, 2021, are actually gone.

The inspector general originally notified the House and Senate Homeland Security Committees in a letter that the text messages were erased from the system as part of a device-replacement program after the watchdog asked the agency for the records.

"First, the Department notified us that many US Secret Service text messages from January 5 and 6, 2021, were erased as part of a device-replacement program. The USSS erased those text messages after OIG requested records of electronic communications from the USSS, as part of our evaluation of events at the Capitol on January 6," Cuffari stated in the letter.

"Second, DHS personnel have repeatedly told OIG inspectors that they were not permitted to provide records directly to OIG and that such records had to first undergo review by DHS attorneys," Cuffari added. "This review led to weeks-long delays in OIG obtaining records and created confusion over whether all records had been produced."

In a statement Thursday night, the Secret Service said the inspector general's allegation regarding a lack of cooperation is "neither correct nor new."

"To the contrary, DHS OIG has previously alleged that its employees were not granted appropriate and timely access to materials due to attorney review. DHS has repeatedly and publicly debunked this allegation, including in response to OIG's last two semi-annual reports to Congress. It is unclear why OIG is raising this issue again," the statement said.

After initially asking for records from more than 20 people in February, the IG then returned to request more records for additional people, according to the law enforcement official. There were no text messages for the new request because they had been lost in the system transfer, the law enforcement official said. The official also said the agency was informed about the transition and sent guidance about how to preserve phone records from the IT department.

CNN law enforcement analyst Jonathan Wackrow, who worked for the Secret Service for 14 years, said it would make sense for the inspector general to be doing the review after January 6. From the Secret Service view, both the President and vice president were kept safe, so the agency would not consider that an incident to review in an after-action report, Wackrow said.