First on CNN: Cassidy Hutchinson stands by her testimony amid pushback 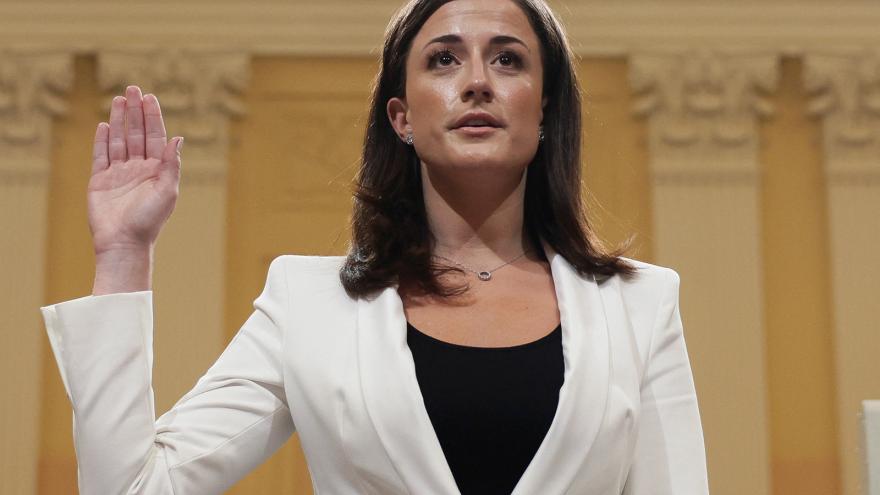 (CNN) -- Cassidy Hutchinson, an aide to former Trump White House chief of staff Mark Meadows, released a new statement Wednesday provided exclusively to CNN standing by her blockbuster testimony delivered in a hearing with the House select committee investigating January 6, in light of some pushback on her testimony.

"Ms. Hutchinson stands by all of the testimony she provided yesterday, under oath, to the Select Committee to Investigate the January 6th Attack on the United States Capitol," Hutchinson's counsel Jody Hunt and William Jordan said in the statement.

Hutchinson testified for nearly two hours on Tuesday as well as gave recorded depositions in advance of the hearing, where she vividly described her experience at the White House close to Meadows and then-President Donald Trump during the days leading up to and including the Capitol Hill riot. Hutchinson described how Trump and Meadows had been repeatedly warned in advance and on the day of the attack about the possibility of violence including from armed individuals at the rally.

While officials with the Secret Service as well as close to Trump have not disputed the overall characterization of Hutchinson's testimony, some are rebutting specific claims and descriptions.

Unlike Hutchinson's testimony, the limited denials were not made under oath.

Hutchinson testified she had been told that when Trump was informed by security that he would not be going to the Capitol on January 6, 2021, he lunged to the front of his vehicle and tried to turn the wheel with one hand while using his other hand to "lunge" at Robert Engel, the Secret Service agent in charge that day. Hutchinson testified that she had been told this story by Tony Ornato, then-White House deputy chief of staff, and that Engel had been there as the story was told.

After the hearing, a Secret Service official familiar with the matter told CNN that Ornato denies telling Hutchinson that the former President grabbed the steering wheel or an agent on his detail.

Ornato is known to have a strong relationship with Trump and his team, having been granted an unusual waiver to suspend his time on the US Secret Service to serve as Trump's deputy White House chief of staff.

Engel had previously testified before the committee and described the interactions with Trump on January 6, including the former President's desire to travel to the Capitol, but Engel was not asked about an altercation or being assaulted, the official said.

The Secret Service, through the Department of Homeland Security Office of Legislative Affairs, notified the committee Tuesday afternoon that it will make the agents involved available to testify under oath, the official said, and that the agents are prepared to say under oath that the incident Hutchinson described did not occur.

The committee did not ask Secret Service witnesses to respond to Hutchinson's testimony prior to Tuesday's hearing, Secret Service spokesperson Anthony Guglielmi said in a statement Wednesday.

"We were not asked to reappear before the Committee in response to yesterday's new information and we plan on formally responding on the record," Guglielmi said. "We have and will continue to make any member of the Secret Service available."