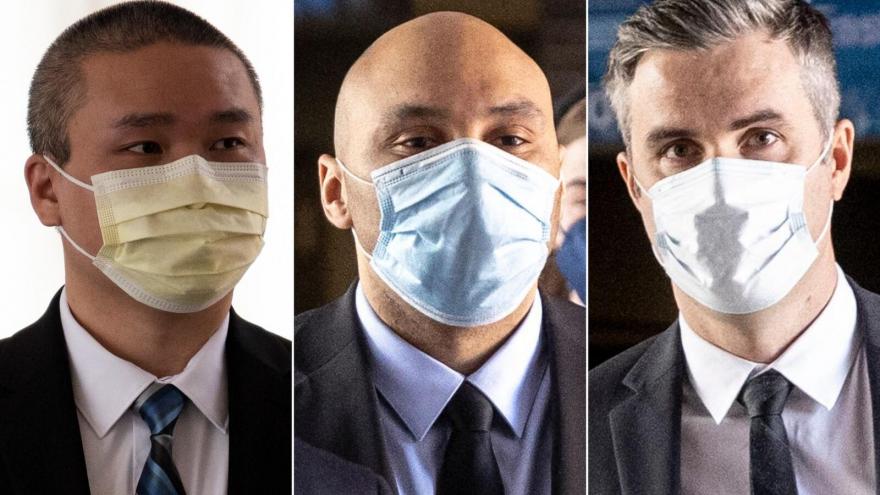 (CNN) -- Former Minneapolis Police Officer Tou Thao was called to testify in his own defense Tuesday after the prosecution rested in the federal civil rights trial of the three ex-police officers charged with violating George Floyd's civil rights.

Thao testified that an officer using their knee to restrain a suspect was taught in the police academy. He also said he assumed other officers were "taking care" of Floyd while he was helping control the crowd.

The federal civil rights trial comes more than a year after former Minneapolis officer Derek Chauvin knelt on Floyd's neck and back for 9 minutes and 29 seconds.

Former officers J. Alexander Kueng and Thomas Lane have said they also will take the stand.

Kueng and Thao told US District Judge Paul Magnuson on Monday they planned to testify in their own defense.

Lane, the rookie officer who held down Floyd's legs during the fatal restraint, told the judge Tuesday that he also planned to take the stand. His attorney Earl Gray had told Magnuson a day earlier he wanted to speak with Lane about it before giving a final decision.

Thao's testimony Tuesday began with him explaining his upbringing and decision to become a police officer. The son of Laotian immigrants, Thao said seeing police arrest his father after an abusive incident got him thinking about joining law enforcement.

Defense attorney Robert Paule showed the jury several photographs from Thao's time in the police academy that pictured instructors using their knees to subdue and arrest subjects during training exercises.

Calling one such photo a "handcuffing drill," Thao said it was common practice to be taught how to subdue people in a prone position while using a knee to control the person.

"Do you see if those two officers are using their knees?" Paule asked Thao.

"They are," Thao responded.

One photo showed a use-of-force instructor smiling while his knee is on the neck of the subject in the exercise.

"Is this something that was typically taught at the academy while you were there?" Paule continued.

When asked why a knee would be used in the exercises, Thao said it was "to prevent them from rolling around or get up."

Lane, Kueng and Thao are each charged with deprivation of rights under color of law as Chauvin restrained Floyd, and Thao and Kueng are also charged with willfully failing to intervene in Chauvin's use of unreasonable force, resulting in Floyd's death.

The three have pleaded not guilty to the federal charges and are being tried together. Chauvin admitted guilt in December as part of a plea deal.

All three former officers will face a state trial later this year on charges of aiding and abetting in Floyd's murder.

Defense attorneys for the three former officers began presenting their case Tuesday. Prosecutors are expected to resume their cross examination of Thao on Wednesday at 10:30 p.m. ET.

Thao thought Floyd was on drugs during encounter

Paule questioned Thao about the events on May 25, 2020, when he and other officers responded to the Cup Foods in Minneapolis. Thao testified he was aware officers Lane and Keung had only been officers for a few days.

Thao said that even though he had been waived off from responding to the scene after other officers had arrived, he decided to continue assisting.

"From my experience, Cup Foods is hostile to police," he told the jury. "It's a well known Bloods gang hangout."

Thao said he thought "it was obvious" Floyd was under the influence of drugs or alcohol, partly because he was "very sweaty."

He added that Floyd used his leg to "launch himself" as he resisted being placed into a squad car.

It was not uncommon to see other Minneapolis police officers use their knee while arresting someone, Thao said, and his role at the scene shifted to crowd and traffic control.

"I knew the crowd was starting to gather up and cause issues," Thao said. "At that point I have a different role, which is to do crowd control to allow them to attend to Mr. Floyd."

Thao referred to his shifted role as becoming a "human traffic cone," ensuring that cars would not hit the officers and the ambulance that had been called could easily spot them.

During cross examination, prosecutor LeeAnn Bell continuously asked Thao about his moment-by-moment view of his fellow officers holding Floyd down.

Thao testified he did see Chauvin's knee on Floyd's neck and that he was in a position to hear Floyd stop talking. Thao also said he was able to see his partners and what was happening around them.

Paule objected numerous times to Bell's line of questioning, particularly when the prosecutor attempted to walk Thao through the incident minute-by-minute using the video. Paule told the court the continued showing of the videos would be prejudicial.

When Bell pressed further on her ability to show video excerpts, US District Court Judge Paul Magnuson told the prosecutor: "We've seen this thing over and over again."

Bell then began showing multiple photographs of Thao's position and the direction he was facing while working to control the group of bystanders shouting at the officers.

Bell also pressed Thao on what he heard witness Charles McMillian say to officers as he watched from the sidewalk. She asked Thao if he remembered McMillian saying, "One of my homies died the same way."

"I'll take your word for it," Thao responded.

Prosecution says Floyd could have survived

Prosecutors called more than 20 witnesses over the course of the 13 days of testimony. The prosecution prompted both high-ranking Minneapolis police officers and expert witnesses to testify that defendants had a duty to intervene and render first aid, under department policies.

Multiple witness also testified the three ex-officers made no attempt to get Chauvin off Floyd's neck, or render medical care. Several medical experts testified this was "a survivable" event and that CPR would have saved Floyd's life.

Many of the witnesses called by prosecutors also testified last year at Chauvin's state trial, where he was found guilty of second-degree unintentional murder, third-degree murder and second-degree manslaughter.

Testimony stalled for three days earlier this month after a defendant tested positive for Covid-19. A juror was also dismissed after disclosing that his son was dealing with a serious mental health issue.

The male juror was replaced by an alternate male juror, according to a pool reporter in court. The 12-juror panel still comprises five men and seven women. There are now five alternates: two men and three women.