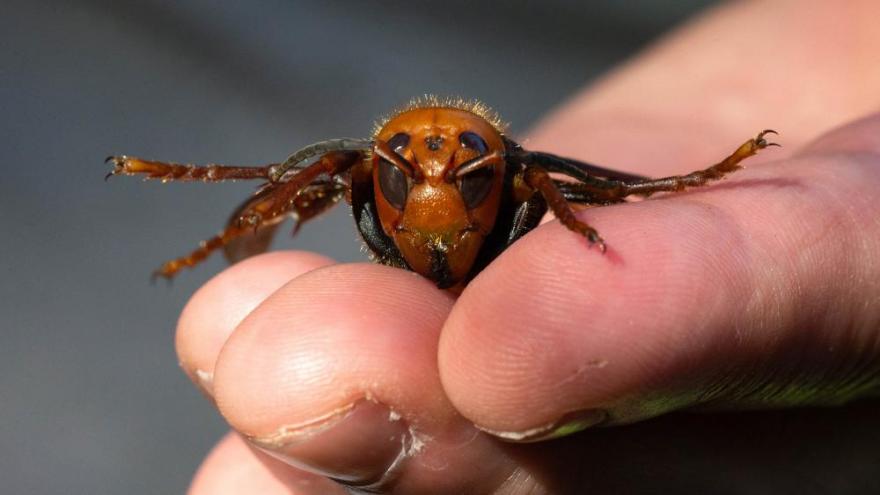 Asian giant hornets are the largest hornets in the world and can grow to be up to two inches long.

(CNN) -- Entomologists in Washington state are setting up traps and urging people to be on the lookout after a "murder hornet" was spotted attacking a paper wasp nest this week near the US-Canadian border.

It's the first confirmed sighting of a live "murder hornet," or Asian giant hornet as they're formally known, this year, according to a news release from the Washington State Department of Agriculture (WSDA).

It was reported in a rural area near Blaine, Washington, on Wednesday by a resident who was able to get a photograph of the distinctive yellow and black insect. Experts confirmed that it was an Asian giant hornet on Thursday.

"This hornet is exhibiting the same behavior we saw last year -- attacking paper wasp nests," Sven Spichiger, WSDA managing entomologist said in the news release. "If you have paper wasp nests on your property and live in the area, keep an eye on them and report any Asian giant hornets you see. Note the direction they fly off to, as well."

The hornet was spotted about two miles away from where WSDA staff had found and eradicated an Asian giant hornets' nest in October of 2020. It was about a half-mile from the border, the WSDA said.

Officials in Washington and British Columbia are setting up live traps in the area to try to catch a live hornet and tag it, so they can hopefully track it back to its nest, the release said.

A dead Asian giant hornet was discovered in June near Seattle, but officials believe that it was an old hornet from a previous season that had died and wasn't discovered at the time.

Asian giant hornets are the largest hornets in the world and can grow to be up to two inches long, according to the US Department of Agriculture. Its native range extends from India to East Asia.

The hornet is considered invasive in the United States and "if it becomes established, this hornet will have negative impacts on the environment, economy, and public health of Washington State," the WSDA said on its website.

Asian giant hornets prey on honey bees and other insects and a few of the insects can destroy a honey bee hive in just a few hours, the WSDA said. They typically attack honey bee hives in the late summer or early fall.

They earned the "murder hornet" nickname because they enter a "slaughter phase," where they kill bees by decapitating them, the WSDA said.

The hornets don't generally attack people or pets, but they will sting when threatened. Their stingers are longer than that of a typical wasp and can pierce a beekeeper's protective clothing, the WSDA said. They can sting multiple times and their venom is more toxic than that of other local bees.

The WSDA is asking people to report any possible Asian giant hornet sightings on its website.