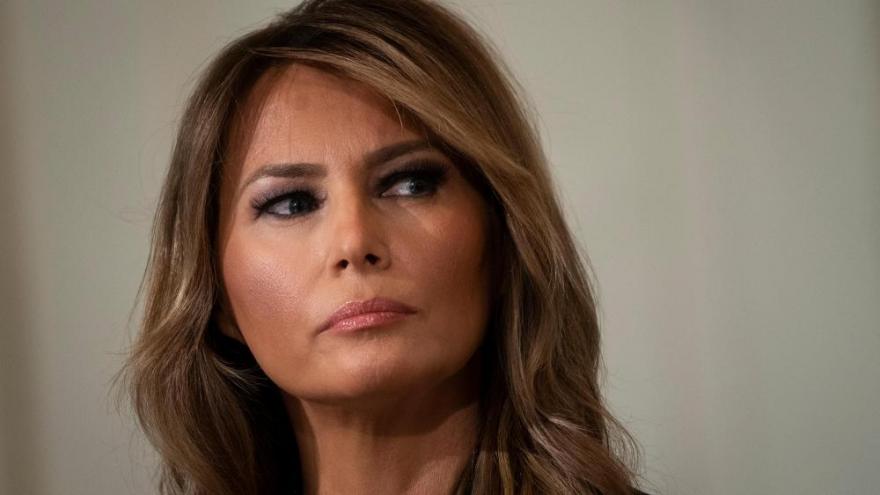 First lady Melania Trump, seen here in 2020, has broken her silence on the Capitol insurrection incited by her husband in a letter posted on the White House website on Jan. 11.

(CNN) -- First lady Melania Trump mourned the lives lost -- first of the rioters and then the Capitol Police officers -- from last week's attack, cast herself as a victim of "salacious gossip" but placed no responsibility for the domestic terrorism on husband President Donald Trump or his rhetoric.

She issued a statement on WhiteHouse.gov on Monday expressing her condolences to the four Trump supporters killed during the attacks before naming the US Capitol Police officers who died in the line of duty.

"Most recently, my heart goes out to: Air Force Veteran, Ashli (Babbitt), Benjamin (Phillips), Kevin Greeson, (Roseanne) Boyland, and Capitol Police Officers, Brian Sicknick and Howard Liebengood. I pray for their families comfort and strength during this difficult time," she said.

Trump also lashed out at what she called "salacious gossip and unwarranted personal attacks" before condemning last Wednesday's violence, likely responding to CNN reporting she was engaged in a furniture photo shoot during the insurrection.

"I find it shameful that surrounding these tragic events there has been salacious gossip, unwarranted personal attacks, and false misleading accusations on me -- from people who are looking to be relevant and have an agenda. This time is solely about healing our country and its citizens. It should not be used for personal gain," the first lady, whose "Be Best" platform centers on civility and kindness, said in the post.

Trump then condemned the events of last week: "Make no mistake about it, I absolutely condemn the violence that has occurred on our Nation's Capitol. Violence is never acceptable," she wrote.

Short of casting any responsibility on the President, the first lady instead euphemistically described what led to the events as "passion and enthusiasm."

"It is inspiring to see that so many have found a passion and enthusiasm in participating in an election, but we must not allow that passion to turn to violence," she said.

While images of the mob breaking into the Capitol consumed the airwaves, the first lady was focused -- with the White House chief usher, Timothy Harleth -- on getting the furniture shoot completed. Both the media, including CNN, and members of her staff were asking if Trump had plans to tweet a statement of calm, or a call to stop the violence -- something she had done a handful of times months earlier during the protests surrounding the police killing of George Floyd. She did not.

Her disinterest in addressing the country was indicative of being "checked out," said another White House source, who added, "she just isn't in a place mentally or emotionally anymore where she wants to get involved."

With the absence of Grisham, who aided Trump in speechwriting and communications, it was not immediately clear how the statement came together, though there were multiple examples of striking similarities between passages of the post and Trump's August 2020 speech to the Republican National Committee.

"My husband and I have visited many places that have been affected by natural disasters and we are deeply moved by the strength of the people who have lost everything and the kindness of neighbors and communities. The common thread in all of these challenging situations is the unwavering resolve to help one another," Trump said from the Rose Garden during the Republican National Convention in August.

On Monday, she wrote: "Our country's strength and character have revealed themselves in the communities that have been impacted by natural disasters and throughout this terrible pandemic that has affected all of us. The common thread in all of these challenging situations is American's unwavering resolve to help one another."

In August: "It has been inspiring to see what the people of our great nation will do for one another, especially when we are at our most fragile."

And on Monday: "As your First Lady, it has been inspiring to witness firsthand what the people of our great Nation will do for one another, especially when we are at our most vulnerable."

Those similarities come over four years after Trump was widely criticized for plagiarizing passages from then-first lady Michelle Obama during Trump's 2016 RNC remarks.

This story has been updated with additional context on the first lady's statement.