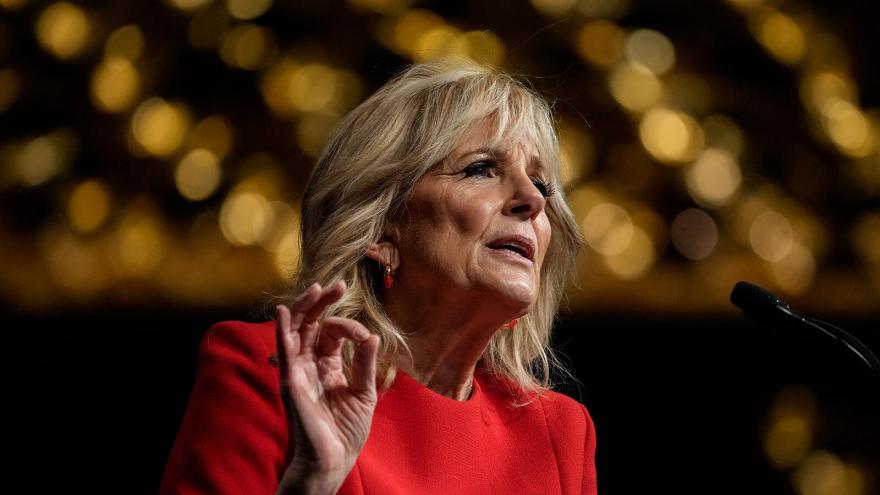 US first lady Jill Biden speaks at the Community College National Legislative Summit in Washington, DC, on February 7. Biden will host Ukraine Ambassador to the US Oksana Markarova in her box at Tuesday night's State of the Union address, among a number of other guests.

(CNN) -- First lady Jill Biden will host Ukraine Ambassador to the US Oksana Markarova in her box at Tuesday night's State of the Union address, among a number of other guests.

Markarova in recent weeks has been an outspoken defender of Ukraine in her country's fight against Russian invasion. On Monday, Markarova met with members of Congress to ask for continued sanctions and more weapons, saying, "We are not asking anyone to fight for us, we are defending our country ourselves. But we need all the support that all civilized world can give us to actually continue effectively fighting."

In addition to Markarova, Biden announced a list of eight other individuals chosen to sit with her and second gentleman Douglas Emhoff to watch President Joe Biden deliver his speech to the nation. A statement released by the White House said the guests were chosen based on their "resilience, innovation, service, and courage," and they will serve as representatives of the themes Biden will touch on in his address, including the pandemic, the military, infrastructure and the American Rescue Plan, healthcare, and education.

The guests include Joseph "JoJo" Burgess, an Army veteran and second-generation steelworker from Pittsburgh, who last month introduced President Biden at an event surrounding manufacturing, infrastructure and the American supply chain.

Seventh-grader Joshua Davis from Midlothian, Virginia, is a student-advocate for diabetes awareness, who with his mother also introduced President Biden at a February event, where the topic was the cost of prescription medication.

Refynd Duro from Galloway, Ohio, is a nurse who has been on the frontlines of helping Covid-19 patients since the beginning of the pandemic, at times isolating herself from her young son in order to protect her family from the heightened dangers of her job working with patients.

Biden has also included two members from the tech community, though each in a very different capacity.

Patrick "Pat" Gelsinger is the CEO of Intel, the tech giant, which in January announced a substantial investment in a semiconductor manufacturing plant in Ohio. The building of the facility will be done by union laborers, creating thousands of jobs.

Frances Haugen made headlines last fall when she revealed practices by her former employer Facebook that jeopardized safety and security. Haugen testified before Congress on the internal workings of the social media giant, advocating for changes in policies, and protection for vulnerable groups, including teenagers.

Biden has had several events supporting Native American communities during her first year as first lady, and Tuesday night she will include among her guests Melissa Isaac, educator and member of the Saginaw Chippewa Indian Tribe. Isaac is a "Gizhwaasod," or "protector of the young," in the Michigan Department of Education's Indigenous Education Initiative. In October of last year, Isaac was a member of a listening session held by Biden on a visit to the Saginaw Chippewa community.

Another of Biden's initiatives as first lady includes military families. Danielle Robinson of Columbus, Ohio, is a military spouse who lost her husband Sergeant First Class Heath Robinson in May 2020 to a rare autoimmune disorder and stage 4 lung cancer. Sergeant Robinson had served in Kosovo and Iraq. His widow is now an advocate for helping those who have been exposed to environmental hazards and burn pits while serving in the military.

Kezia Rodriguez is a full-time student at Bergen Community College in New Jersey, and the mother of twin girls. Her daughters benefit from the school's tuition-free child care program, an initiative supported by the American Rescue Plan. As the first first lady to work in a job outside of the White House -- she teaches English at Northern Virginia Community College, Biden has been a staunch representative of community colleges education. This will be the second time the first lady and Rodriguez have met; in January Rodriguez introduced Biden at an event at Bergen.

This story has been updated with more reporting.