First lady calls for end of e-cigarette marketing to youth 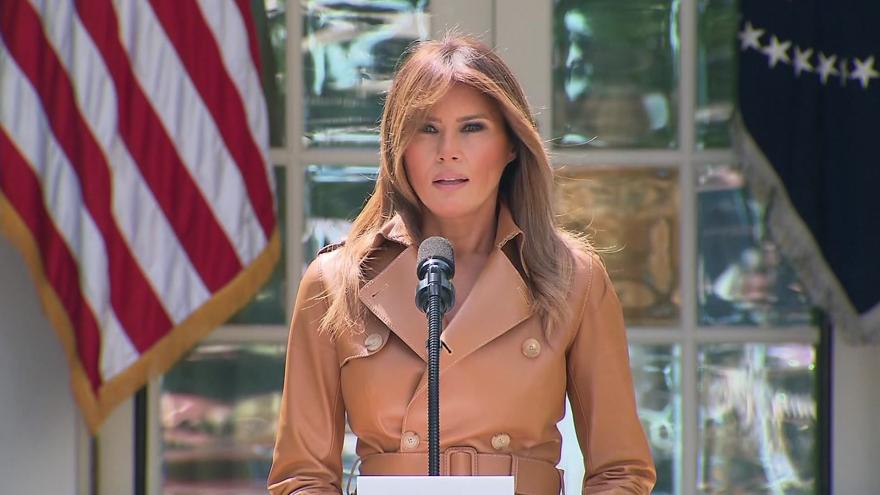 Marketing tobacco products to kids is already prohibited in the United States, and Juul Labs Inc., the nation's largest maker of electronic cigarettes, has said it will cease advertising them in the U.S.

Still, some believe Juul's early online marketing of e-cigarettes contributed to an explosion in vaping among youth.

Mrs. Trump said "it is important to me that we all work to educate children and families about the dangers associated with this habit."

"Marketing this addictive product to children must stop."

The first lady promotes an anti-drug message through the "Be Best" youth initiative she launched in May 2018.

She and the president have a 13-year-old son, Barron.

Last month, Mrs. Trump tweeted her concerns over the "growing epidemic of e-cigarette use in our children."

She later joined President Donald Trump when he announced from the Oval Office that U.S. health authorities will act to ban thousands of fruity and other flavorings used in e-cigarettes.

Federal statistics show vaping among teens had increased significantly between 2017 and 2018.

Among high school students, e-cigarette use increased 78% - from 11.7% t0 20.8% - during the period, according to the U.S. Food and Drug Administration's National Youth Tobacco Survey.

Mrs. Trump said her visits to hospitals and rehabilitation centers have allowed her to see "the horrible results of drug abuse."

She pledged to "continue to address addiction as long as it affects our children, our youth and our schools."

The first lady spoke at a rally at the headquarters of the U.S. Drug Enforcement Administration near Washington to mark the start of the annual "Red Ribbon Week" on Oct. 23.

"Red Ribbon Week" came into being after the 1985 torture and slaying of DEA Special Agent Enrique "Kiki" Camarena in Mexico.

Americans began wearing red ribbons to honor Camarena's sacrifice, and schools in the region of California where he lived formed clubs in his name and pledged to live drug-free lives.

Camarena's widow, Mika, attended the rally. Students seated in the auditorium rose and took a pledge to stay away from drugs.

Most of those in the audience wore the event's "red ribbon" pin. The first lady did not wear one on her sleeveless black dress.

Her office said she was not given a pin by DEA staff before entering the auditorium with acting administrator Uttam Dhillon.