Constant updates have left authorities and the public confused about Laundrie's disappearance. Here's what we know 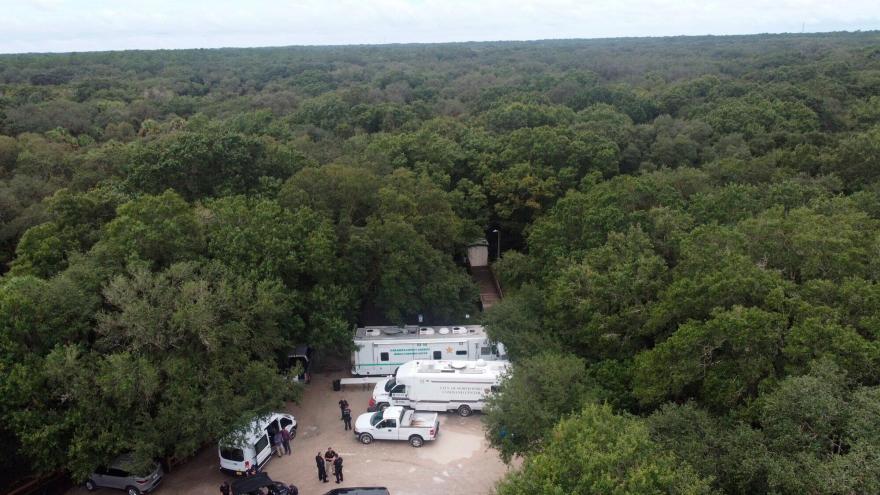 In this photo provided by the North Port Police Department, law enforcement officials search for Brian Laundrie on September 18 in the vast Carlton Reserve in the Sarasota area of Florida.

(CNN) -- It's now been more than three weeks since Brian Laundrie went missing after returning without his fiancee, Gabby Petito, from a cross-country trip.

The case has had constant updates that have left authorities and the public confused as to the timeline of and reasons behind Laundrie's disappearance. His parents have made little to no comment surrounding the case, as well.

Laundrie family attorney Steven Bertolino has previously said Laundrie's parents are "remaining in the background" and would not comment on the advice of counsel. Bertolino has said the Laundries don't know where their son is and haven't heard from him since he left their Florida home around mid-September.

Laundrie has not been charged in the death of Petito, whose body was found in Wyoming. He was indicted on charges of using two financial accounts that did not belong to him in the days following Petito's death.

The search for Laundrie is ongoing, but here's a timeline of what we know about Laundrie:

June 2021: Laundrie embarks on a cross-country trip with Petito

Laundrie and Petito planned a cross-country trip to travel to the West Coast in Petito's white Ford van. Along the way, the couple would visit state and national parks across the Western United States.

Petito documented their trip this summer on social media, posting pictures of herself smiling in Kansas' Monument Rocks, posing on the Great Sand Dunes in Colorado and taking in the views of Utah's Bryce Canyon National Park.

Things took a turn in August when Moab, Utah, police encountered the couple "engaged in some sort of altercation."

The two were described as getting into a physical fight following an argument, a report from officer Eric Pratt said. There were reports and 911 calls from witnesses describing a man (Laundrie) allegedly hitting a woman (Petito).

Body camera footage from Pratt showed Petito telling him that while Laundrie had hit her, she hit him first.

"Both the male and female reported they are in love and engaged to be married and desperately didn't wish to see anyone charged with a crime," Pratt's report ultimately said.

At officers' suggestion, the couple separated for the night, according to the report, which describes Petito as "confused and emotional."

"After evaluating the totality of the circumstances, I do not believe the situation escalated to the level of a domestic assault as much as that of a mental health crisis," officer Daniel Robbins wrote in his report. No charges are filed.

August 17-23: Laundrie flies from Utah to Florida and back

Laundrie "flew home to obtain some items and empty and close the storage unit to save money as they contemplated extending the road trip," Bertolino told CNN.

August 27: Laundrie and Petito are seen at Wyoming restaurant

Driving Petito's van, Laundrie returned to the home he and Petito shared with his parents in North Port, Florida. Petito was not with him.

The Laundrie family goes to a campground about 75 miles away from their home.

Roberta Laundrie, Brian Laundrie's mother, was checked in at a waterfront site at the Fort De Soto Campground from September 6 through September 8, according to a Pinellas County Parks campground check-in report provided to CNN.

The Laundries were at the campground from September 6 to September 7 and left together, Bertolino later told CNN.

Petito's family reported her missing on September 11, weeks after calls to her mother and frequent social media posts had stopped.

The events after this are when things become even more confusing.

At this point, Petito's body had not been found, and police were publicly asking Laundrie and his parents to talk to them about what they knew.

Laundrie had invoked his Fifth Amendment right, North Port Police Chief Todd Garrison told CNN's Don Lemon. It generally means a person cannot be forced to make statements they feel might be negative or used against them.

Initially, Laundrie's parents told North Port police they hadn't seen their son since September 14, but they didn't contact authorities about it for three days.

The parents told police Laundrie left home with his backpack, and a source close to Laundrie's family told CNN's Chris Cuomo that Laundrie left their home without his cell phone and wallet.

Laundrie's parents also told police he was going to the nearby Carlton Reserve, a 25,000-acre nature reserve near the family's home featuring waist-high water, snakes and alligators.

The September 14 disappearance was what local and federal authorities were following for the more than three weeks they were searching for Laundrie at the reserve.

Laundrie's family then said in October that he left their home September 13, a day earlier than previously reported.

Bertolino told CNN that Brian Laundrie's father, Chris Laundrie, went to look for Brian on the night of September 13 after his son didn't return from the park.

The next day, September 14, both of Brian's parents returned to the area outside the Myakkahatchee Creek Environmental Park to look for him and found their Ford Mustang with an abandoned vehicle notice placed on it, Bertolino said. The North Port Police Department confirmed the citation had been placed on the car.

The parents returned the next day, September 15, to retrieve the vehicle.

The FBI announced September 23 that the US District Court of Wyoming issued a federal arrest warrant for him. Laundrie has been charged for using two financial accounts that did not belong to him between August 30 and September 1.

The indictment says he used these accounts to charge more than $1,000 of commerce following the death of Petito that affected interstate commerce. Laundrie did this "knowingly and with intent to defraud," according to the indictment.