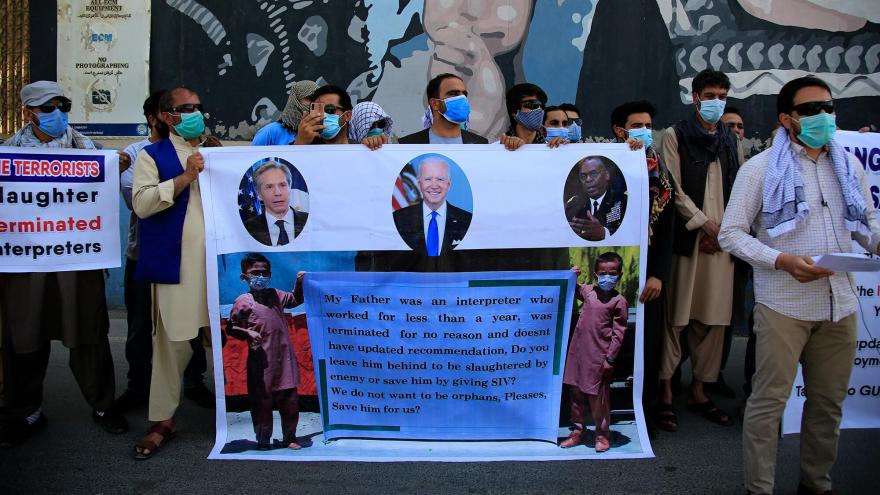 In this June 25, 2021 photo, Former Afghan interpreters hold placards during a demonstrations against the US government, in front of the US Embassy in Kabul, Afghanistan.

(CNN) -- The first group of translators and interpreters who helped US soldiers and diplomats in Afghanistan arrived in the US on Friday, even as thousands more wait in Afghanistan in increasing fear of Taliban reprisals.

The first group of approved Afghan applicants for a Special Immigrant Visa touched down and traveled to Fort Lee, Virginia, on Friday, according to the Biden administration. The flight carried about 200 people, including applicants and their families, part of a priority group of 700 Afghan SIV applicants who have completed the majority of the background process required to get a visa. Along with their families, they number about 2,500.

"Today is an important milestone as we continue to fulfill our promise to the thousands of Afghan nationals who served shoulder-to-shoulder with American troops and diplomats over the last 20 years in Afghanistan," President Joe Biden said in a statement.

Secretary of State Antony Blinken said the Afghans would finish the "remaining steps on their path to becoming America's newest immigrants" at Fort Lee, adding that "it is my great pleasure to say to them: 'welcome to your new home.'"

Blinken added that the US would continue "to support the Afghan people in their pursuit of a just and durable peace and to preserve the gains of the past 20 years, particularly those made by women, girls, and minorities."

Defense Secretary Lloyd Austin said that approximately 300 US service members from several installations, under the direction of US Northern Command, stand ready to provide logistics, temporary lodging, and medical support at Fort Lee. "We have spoken many times about the moral obligation we have to help those who have helped us," Austin said, "and we are fully committed to working closely with our interagency partners to meet that obligation."

'They are looking for us'

The Afghans on that flight are the lucky ones. They represent a sliver of the estimated 20,000 SIV applicants in line, some of whom told CNN they are deeply afraid as they watch the Taliban's bloody executions and reprisals against those who helped US troops.

"We need to get out of the country, they are looking after us," Naveed Mustafa, an interpreter who worked with US and UK forces, told CNN. He has been scrambling to assemble the documents he needs to get himself, his wife, and five children out of the country as they watch the Taliban take control of Afghanistan's borders and seek out Afghan special forces, army soldiers and police, "knocking the doors and taking them out and killing them."

Naveed has colleagues from Special Forces "like, five or six [who] have been killed." Asked if he is living in fear, he says, "completely."

The fear of Taliban reprisal is being felt deeply across Afghanistan as the nearly two-decade US military campaign in the country draws to a close, leaving thousands like Naveed in a bind. The process of applying for the SIV program to be able to come to the United States can take years. And despite the Biden administration's announcement in July that it was launching Operation Allies Refuge, questions remain about whether the US government will be able to relocate SIV applicants quickly enough.

Of the 20,000 people in the SIV pipeline, about 10,000 have only just begun the process, the State Department said in recent weeks.

US officials have said they are looking to relocate some applicants to US military bases, like Fort Lee, and even to third countries so they can complete the application and clearance process in relative safety. However, applicants who are selected to take advantage of the US evacuation flights will have to get themselves to Kabul, despite the dangers such a journey could present as the Taliban has set up checkpoints across the country.

That danger is increasing. After US troops left Bagram Air Base in early July, and with the closure of other bases, Afghans who were employed by the US government on those bases "left their jobs and they left their protection," said Janis Shinwari, a former interpreter and founder of the group "No One Left Behind," which assists SIV recipients like himself with resettling in the US.

The Taliban recently came looking for Ramish, another interpreter who spoke to CNN. His family hid him. After the Taliban's searched fruitlessly, they burned down Ramish's house. The interpreter escaped his hometown and traveled in the middle of the night to Kabul, where he is trying to get through the SIV process. If he can't get out, he said, "our future will be dark."

Referring to reports that the Taliban is beheading Afghans who worked with US troops, Ramish adds, "they're going to cut our heads too."

Lawmakers have united with nonprofit groups to urge the Biden administration to do more, and do it more quickly, for the Afghans who served alongside US soldiers and diplomats. Congress has come together in rare bipartisan fashion on legislation to streamline the visa process for SIV applicants and increase the number of visas available -- an initiative administration officials welcome.

"We've had exponentially more Afghanis who worked with US Forces than the State Department even has visas for, and the State Department is so backed up right now they can't even speed it up," Sen. Tammy Duckworth, a combat veteran on the Armed Services Committee, told MSNBC on Thursday. "They're looking at a two- to four-year backlog."

Referring to the interpreters and translators, Duckworth added that, "they have bull's-eyes on their back, as well as their family members, and we need to get them out of harm's way."

As lawmakers and government officials work to get SIV applicants to safety in the US or a third country, nonprofit groups and individuals have also taken it upon themselves to help.

Army Capt. Sayre Paine worked with Ramish, whose house was torched, and encouraged him to flee to Kabul.

"To me, it's the comrade-in-arms and an indelible duty to not betray them," Paine told CNN. "You put these people on a tier with your own family."

Paine says US troops could not have done the job on the ground without the interpreters by their side. He feels angry thinking about the ones who may not make it out of the country. "All of these people signing up for this promise to come, literally, to the promised land and to just let it go, is a betrayal to those people," he said.

Shinwari, the founder of "No One Left Behind," told CNN that since Biden announced in April that the US would pull virtually all military forces from Afghanistan, "everyday, hundreds and hundreds of people (are) texting me on my Facebook, they're calling me and they're sending me emails for the help because they are right now in a very bad situation."

But even leaving Afghanistan does not necessarily mean a family is free from the threat of Taliban reprisal, Shinwari told CNN as he waited at Dulles International Airport to welcome another SIV family to America. "No One Left Behind" helped relocate the family to the US with the help of a grant it used to pay for their airfare.

"For most of SIVs who are here, because they still have their immediate family back in Afghanistan, their brothers, sisters, their parents and their other relatives, if the Taliban or the al Qaeda finds out that one member of the family was involved in assisting US military in Afghanistan, they're going to kill the entire family," Shinwari said. "If they can't catch the exact person, if they find out that person is here in the United States, they will go after their family. They will kill anybody in the family for the revenge.