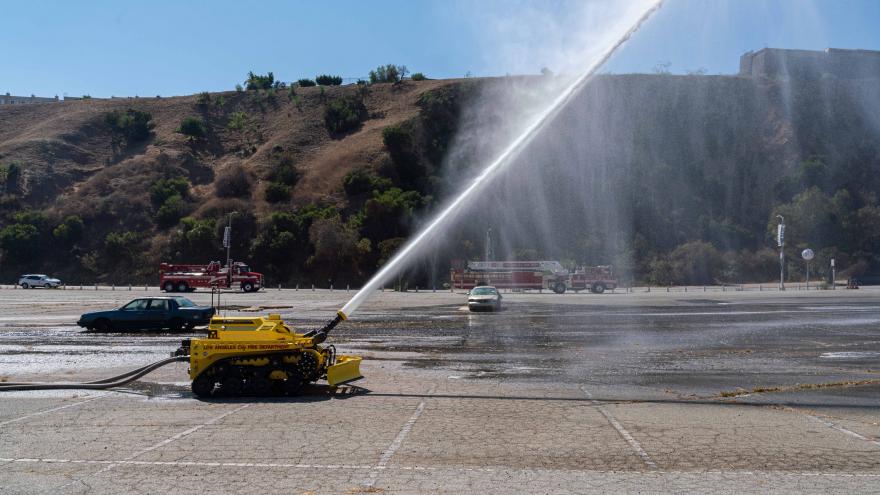 (CNN) -- A newly recruited firefighter in Los Angeles put out a major fire even before being formally introduced at a news conference. That new recruit is a robot.

The Thermite RS3, the first robotic firefighting vehicle in the United States, was scheduled to arrive at the news conference the morning of October 13, but it was diverted to a major emergency structure fire in the fashion district in Downtown Los Angeles earlier that day.

"It was exciting to see this unique piece of apparatus put into action on its first day in service," said Los Angeles Fire Department Capt. Erik Scott.

"What we had was a large one-story commercial building, it was housing piles of textiles, multiple rolls of fabric," Scott described. The Thermite RS3 helped push piles of smoldering wet debris, creating a path for the firefighters to operate safely.

"We got some dirt on the tires before the press conference," Scott added.

The Los Angeles Fire Department is the first in the nation to add a robotic firefighting vehicle to its fleet. The roughly $277,000 purchase was made by the LAFD Foundation, a non-profit organization supporting the department.

"It was about 6 to 8 months to get the fundraising done," said Liz Lin, the president of the LAFD Foundation. They used funds from larger grants provided by donors such as the Tides Foundation and the Musk Foundation, Lin told CNN.

The RS3 will be housed with the Urban Search and Rescue team at Fire Station 3 in Downtown Los Angeles and will be deployed to incidents using a trailer towed by a pickup truck, according to Scott.

Almost as big as a Smart car, but weighing 3,500 lbs, the RS3 has treads like a tank, a v-shaped plow capable of pushing debris -- including vehicles -- out of its way, and a winch that can pull up to 8,000 lbs, according to the LAFD. The frontal nozzle can shoot or spray either water or foam at 2,500 gallons per minute, Scott said. The vehicle, which is remote-controlled by trained firefighters, is equipped with cameras, he added.

The RS3 is manufactured by Howe & Howe, a subsidiary of Textron Systems specializing in advanced robotic land vehicles, including combat vehicles, according to their website.

"The sale and delivery of our Thermite RS3 to the Los Angeles Fire Department represents the first commercial robotic firefighting vehicle in the United States," Paul Ford, program manager at Textron Systems Corp./Howe & Howe Inc., said in a statement. "We continue to work with multiple other large municipalities within the United States regarding implementing this technology," Ford added.

LAFD Chief Ralph Terrazas decided to procure this new technology for the department after seeing a similar device in action during the Notre Dame Cathedral fire in Paris last year, Scott explained.

The tool will be used in situations where risk to firefighters would be high, for example in the case of buildings that become structurally unstable, or when hazardous materials are involved. 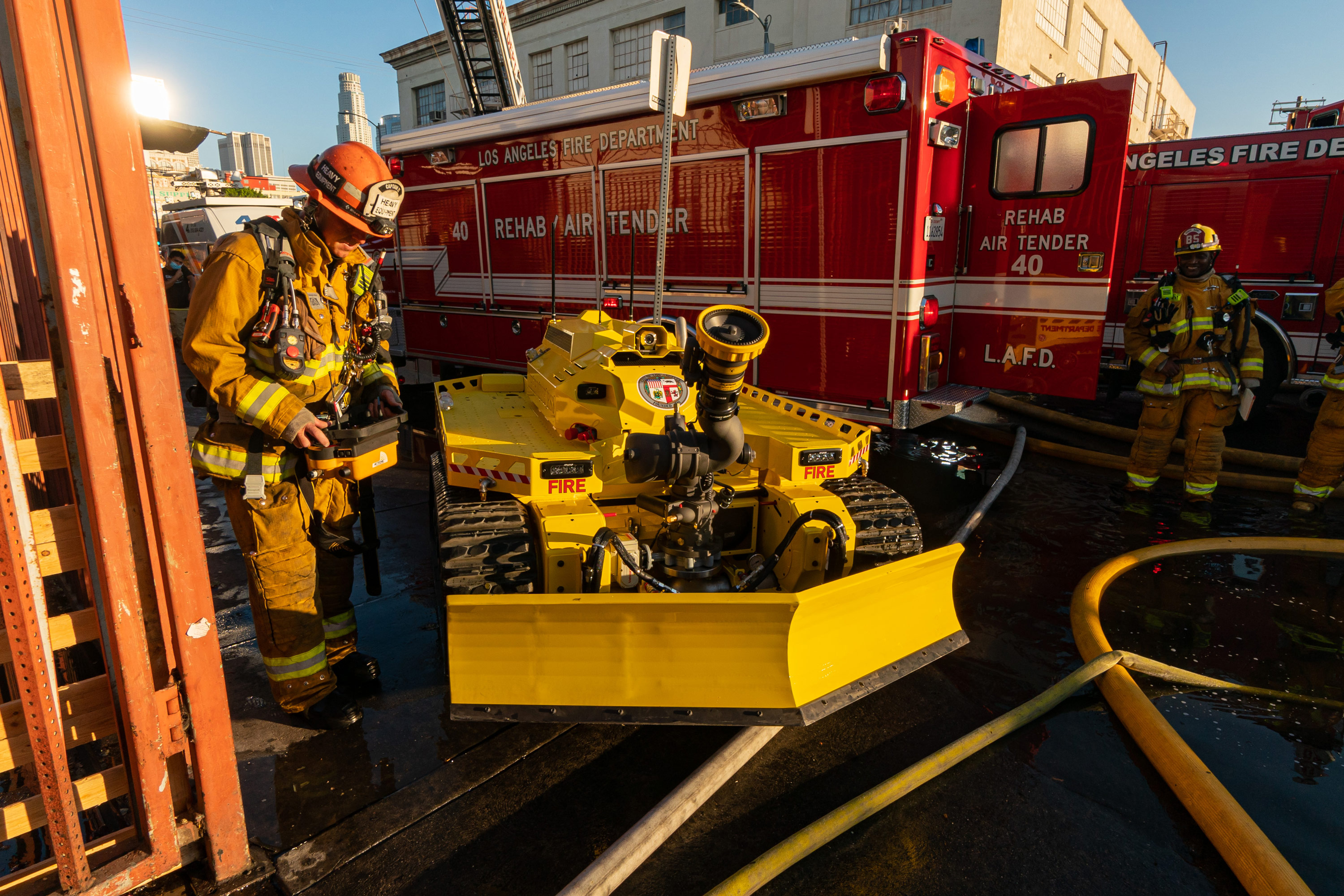 "The point is we cannot afford to lose firefighters. We would much rather lose a piece of machinery, so we would put this into situations we would not put firefighters in due to significant hazards," Scott told CNN.

There have been at least 72 firefighter fatalities in 2020, according to the US Fire Administration. The National Fire Protection Association tallied more than 58,000 injuries to firefighters in the line of duty in 2018, their most up-to-date estimates. Of those injuries, more than 47,000 were connected to exposure to hazardous conditions, the report says.

Just last spring in Los Angeles, an explosion in a building downtown forced firefighters to walk through "a fireball," injuring 12 of them.

According to Scott, the RS3 will be important in many situations, including commercial fires, fires involving under-construction wood-framed structures, fuel tanker fires and auto storage fires.

The machine could assist during wildfires, pulling hoses up steep hillsides or protecting homes threatened by flames. It could also be used for large animal rescues, or in situations involving barricaded subjects, Scott explained.

The list of potential uses is "endless, and dependent upon imagination and need," he said.

"The important thing is that we are reducing risk to firefighters," Scott said.