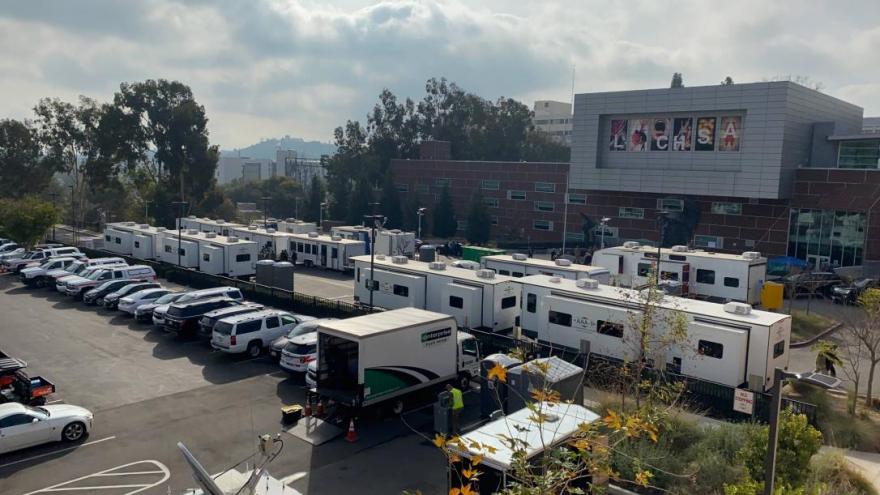 (CNN) -- Two new coronavirus mass vaccination sites opened in California on Tuesday, where cities continue to struggle with securing vaccine supply. The sites are the first to open as part of a wider effort by the federal government to establish 100 vaccination sites nationwide in 100 days.

Officials plan to vaccinate up to 4,000 people at each site on Tuesday with the goal of reaching 6,000 by Thursday, Cal OES spokesperson Brian Ferguson told CNN. Both sites will be administering the Pfizer vaccine. Anyone eligible within their respective county guidelines is welcome, including teachers and agricultural workers, Ferguson said.

FEMA finalized a contract for 30 mobile locations across the nation with over 1,000 staff members deployed to support vaccine centers with federal personnel and technical assistance, according to the agency.

Last week, Cal OES announced that the two California locations chosen for the pilot project are in some of the most diverse and socioeconomically challenged communities.

"We're grateful that Governor Newsom and President Biden chose Cal State L.A. as the first of President Biden's 100 vaccination supersites," Cal State L.A. Executive Vice President and Chief Operating Officer Jose A. Gomez said in an interview. "The community has been hard hit by Covid-19, some of the worst infection rates nationally, and having this here for the community is really going to be a game-changer."

While the Cal State L.A. vaccination site opened to the public on Tuesday, officials held a soft opening Monday for "vaccinating the vaccinators," including some local police, national guard personnel, and Department of Defense personnel. The site is currently offering drive-thru and walk-up appointments and is accessible to those who cannot drive to the site. A bus terminal and a metro train line are located nearby for those using public transportation.

Appointments for the vaccine at Cal State Los Angeles and Oakland-Alameda Coliseum are available on the state's MyTurn scheduling website.

"The goal of establishing these joint federal pilot sites is to continue to expand the rate of vaccinations in California in an efficient, effective, and equitable manner, with an explicit focus on making sure that communities with a high risk of Covid-19 exposure and infection are not left behind," Cal OES said in a statement.

The two new sites opened to the public as large cities in the state continue to struggle with the inconsistent and unpredictable vaccine supply from the state. Last week, Dodger Stadium was forced to shut down due to a shortage of vaccine supply, and some city sites, including Hansem Dam, still remain closed.

On Monday, Los Angeles Mayor Eric Garcetti announced the city will be prioritizing second doses at all city vaccination sites this week. The city is expected to receive about 58,000 doses of the vaccine this week and about 16,000 doses are used each day, according to the mayor.

San Francisco also was forced to temporarily close two mass vaccination sites at Moscone Center and City College of San Francisco this week. Both sites combined have the capacity to vaccinate up to 13,000 people per day.

"SF is averaging over 7,000 vaccines administered per day, but supply from the state and federal gov't isn't keeping up," Mayor London Breed said in a tweet. "I'm frustrated because we've shown that SF can administer shots as soon as they come in."

California Gov. Gavin Newsom said the vaccine doses at the FEMA sites are additive and not part of the state allocation.

"The state of California is coordinating closely with FEMA to ensure the vaccine doses used at these sites will not decrease the available supply for other sites in the hosting counties," Newsom's office said in a statement earlier this month.

Sites in Houston, Dallas and Arlington, Texas, as well as Queens and Brooklyn in New York, are scheduled to open next Wednesday, Gen. Glen VanHerck, the commander of US Northern Command, said, speaking via teleconference.

FEMA requests a separate supply of vaccines from CDC to administer at these pilot sites and will not be using the states' allocation, Acting Administrator Bob Fenton said. The regular supply to states stands at 11 million doses per week now, said Fenton, and it is expected to rise to 13.5 million doses next week.

On a conference call with reporters Tuesday, Fenton appeared to indicate that FEMA had its own supply of 11 million doses to administer. A FEMA spokesperson said that a bad audio connection interrupted the call, and that Fenton was clarifying the difference between the state allocation and the FEMA pilot sites.

Clarification: This story has been updated with FEMA's clarification regarding the supply of vaccine doses to the states and to the new vaccination pilot sites being established.