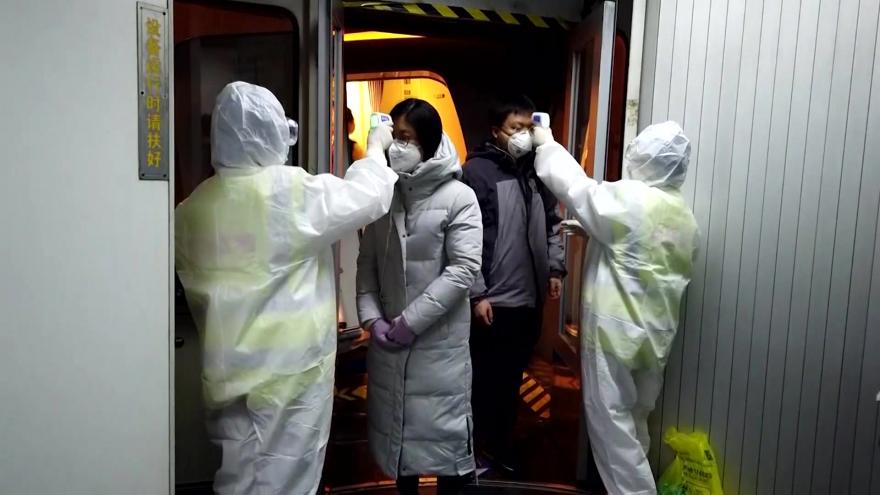 (CNN) -- The husband of an Illinois woman with Wuhan coronavirus is now infected with the illness, and is the first confirmed case of person-to-person transmission of the virus in the United States, the US Centers for Disease Control and Prevention announced on Thursday.

"I want to emphasize that the risk of this novel coronavirus to the general public in Illinois remains low," Dr. Ngozi Ezike, director of the Illinois Department of Public Health, said in a written statement on Thursday. She added that local, state and federal health officials are working to identify people who have had close contact with the case in order to minimize further spread of the virus.

"We will continue to keep the public fully informed as additional information becomes available," she said.

The husband, a Chicago resident in his 60s, is the second confirmed case of the virus in the state.

The woman, who is in her 60s, is the first confirmed travel-associated case in Illinois and was diagnosed after returning from Wuhan, China, where the outbreak originated. She is "doing quite well" and remains hospitalized primarily for isolation, doctors told reporters during a telebriefing with reporters on Thursday.

The husband, who did not travel to China, was admitted more recently to the hospital and has some underlying medical conditions, but is stable.

"Given what we've seen in China versus other countries, CDC experts have expected to find some person-to-person spread in the United States," CDC Director Dr. Robert Redfield said during Thursday's telebriefing.

"Based on what we know now, our assessment remains that the immediate risk to the American public is low."

The Illinois Department of Public Health said the husband was in close contact with his spouse over a long period of time while she was symptomatic. Symptoms can include fever, cough and shortness of breath.

"We know coronaviruses are most likely to spread through close personal contact, and we know this second patient had close contact with his wife after she began to develop symptoms, so it's not totally unexpected that he acquired the virus," Dr. Allison Arwady, commissioner of the Chicago Department of Public Health, said in the written statement on Thursday.

"This is exactly why public health has been monitoring him closely, and why we monitor any close contacts of confirmed cases," she said. "This does not change our guidance that the risk to the general public remains low at this time. People in the community do not need to change their behavior based on this news; for example, they don't need to cancel events, avoid mass gatherings, or wear gloves and masks in public."

Public health officials are investigating locations the second patient visited over the past two weeks and any people he may have had close contact with, state officials said.

Public health and medical professionals are taking an aggressive approach in identifying and actively monitoring people who were in contact with both the second patient and his wife in an effort to reduce the risk of additional transmission. A CDC team also remains in Illinois to support those efforts, according to the state.

In the United States so far, with this latest case, there are a total of six confirmed cases of coronavirus, according to the CDC. One case is in Arizona, one in Washington state, two in California and two in Illinois. The CDC said Wednesday that 165 people in the United States have been under investigation for the virus. Sixty-eight had tested negative and 92 results were pending.

In mainland China, at least 170 people have died and more than 8,100 cases have been confirmed as the virus continues to spread.

"If you are a traveler who has recently returned from the impacted area, we want you to be vigilant with the symptoms and signs of this coronavirus," Dr. Nancy Messonnier, director of the CDC's National Center for Immunization and Respiratory Diseases, said during the teleconference.

"Wash your hands, cover your cough," Messonnier said. "For the rest of the American public right now, we understand that folks are concerned."