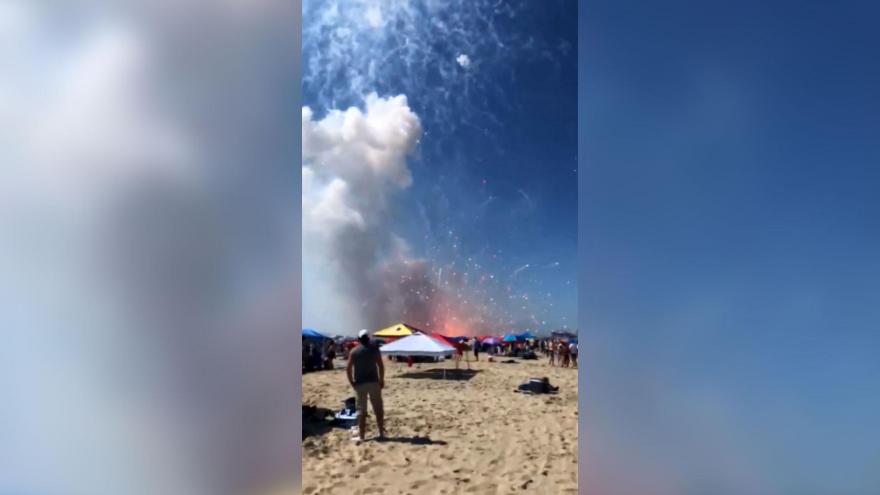 Employees of the fireworks company behind the July 4th celebration in Ocean City, Maryland, received minor injuries after the fireworks accidentally exploded.

First responders initially thought a car was on fire, but when they arrived at the scene they discovered there was "an unintentional discharge of fireworks" being set up for the show, the Ocean City Fire Department said in a Facebook post Sunday morning.

The employees declined transport to a local hospital, and no other beach or boardwalk visitors were injured as a result of the explosion, the fire department said.

A spokesperson for Starfire Corporation, the company responsible for administering the fireworks display in Ocean City, told CNN they are investigating the cause of Sunday's explosion along with several other agencies.

All the products used in the fireworks display were shipped from overseas locations, the spokesperson said, adding that the fireworks and shipment origins are also being looked into.

"Starfire Corporation feels terrible about what happened, and we are grateful to the Ocean City Fire Department and all the other agencies that helped today," the spokesperson told CNN.

Fire marshals are on scene and continue their investigation into the fireworks discharge.

All fireworks celebrations in Ocean City have been canceled out of "an abundance of caution," the Ocean City Fire Department confirmed on Facebook.

"At this time, the cause of the fireworks discharge is unknown," the fire department said. "A perimeter around the fireworks site has been established and will remain in place until the safety inspections are complete, which could take several days."

Areas of the boardwalk will also remain closed to pedestrians until safety inspections have been completed.