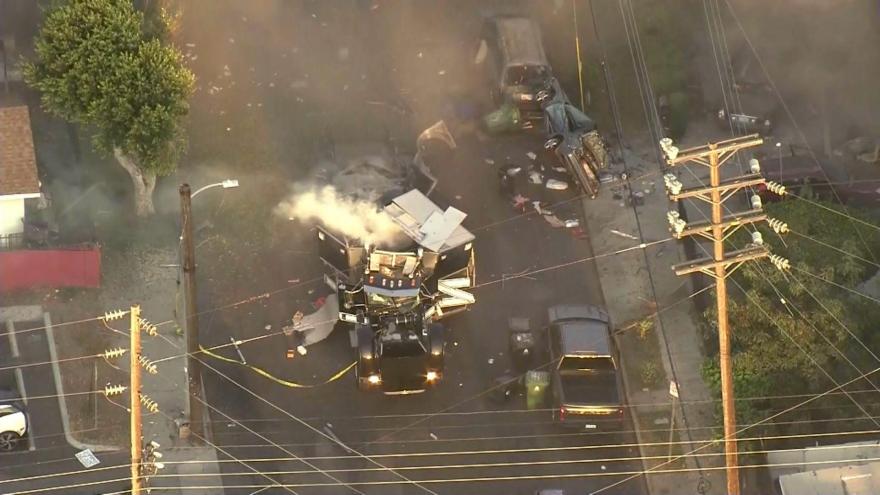 Some 17 people were injured last month in a South Los Angeles neighborhood.

Ahead of the July Fourth holiday, the LAPD bomb squad responded to the 700 block of East 27th Street after receiving an anonymous tip that a resident was storing illegal fireworks in their backyard.

According to Moore, more than 32,000 pounds of illegal fireworks were found in the resident's backyard. Some of the fireworks were found with "leaking material," causing officers on site to deem them too dangerous to transport and prompting them to detonate them on the scene.

Bomb technicians estimated the weight of the explosives to be about 16.5 pounds, but when the ATF National Response Team conducted an investigation following the blast, their total net explosive weight was just over 42 pounds, according to Moore.

"We believe a human error went to the miscalculation of the amount of material going into that vessel," the police chief said. "It's believed that the net explosive weight placed into the TCV exceeded its rated capacity."

Moore said that the bomb disposal truck was used in 41 previous instances, this incident being its third use this year. In all earlier instances of its use, the truck had no malfunctions or documented issues, he said.

Before the detonation, three phases of evacuations took place and additional safety measures such as stand-off distances were implemented, according to Moore.

When officials proceeded to detonate the fireworks, a massive explosion took place that injured 17 people and damaged or destroyed 13 businesses, 22 residential properties and 37 vehicles.

Moore called the incident a "catastrophic failure." ATF official Michael Hoffman said that the amount of explosives found in the resident's backyard "probably could have taken out that entire neighborhood."

Five members of the bomb squad have been "taken out of the field" following the blast, Moore said. He added that he will "hold people accountable for those that failed to follow our expectations."

In addition, the bomb squad manual is now being revised and there will be a "top-down, bottom-up inspection of the LAPD bomb squad," Moore added.

"We can and must do better," he said.

According to Hoffman, the final investigation into the cause of the blast will not be complete for another 30 to 60 days.