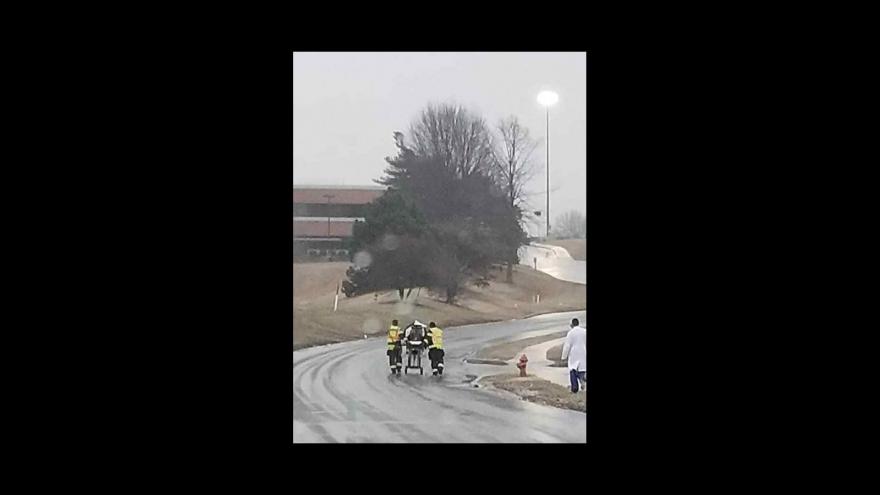 What seemed like a normal call for two firefighter paramedics in St. Louis, Missouri, quickly turned into an unsteady situation unknowingly captured by a stranger.

Jon Stillpass and Shaylor Taetz, who have both been working as paramedics and firefighters for about seven years, had to go to extreme lengths to get a patient to DePaul Hospital in wintry conditions. The two had no idea the event was photographed by Carol Parks, one of the hospital's nurses.

Taetz tells CNN he had picked up an extra shift and was 10 minutes into his coffee when they had to head out on the road for a call concerning a traffic accident.

The two came upon the scene of a metro bus, loaded with just the driver, that had slid on ice and spun around in the opposite direction. The ambulance itself started to slide as they approached, but Stillpass managed to keep the vehicle on the road.

Though Taetz says the driver didn't have any life-threatening injuries, she was shaken up, and it was clear she needed to be taken to the hospital for evaluation.

Both men salted around the ambulance enough to get back on the road.

When they took the exit for the hospital, they saw several cars that had clearly slid on ice, so Stillpass then added chains to the wheels of the ambulance, hoping to gain traction. Even with chains, they slid into a guardrail, but managed to get out again. Then, a little over a mile away from the hospital, they slid on ice again, and Taetz says. Stillpass skillfully guided the ambulance away from a 15-foot drop into a small ravine on the left side of the road. However, the vehicle was stuck, and the patient was clearly getting distressed by the situation.

The two men put extra traction on their boots to keep from slipping on the ice and proceeded to push the patient about a mile -- complete with two large hills.

"You know how your parents say 'uphill both ways,' it was like that," Taetz jokes. He adds they had to switch positions halfway through because of the difficulty of the journey.

After they made it to the hospital, their fire truck crew had to come rescue the ambulance from the ice. Taetz says they even went on a few more calls.

Taetz credits the ability to make the last-minute decision to the Maryland Heights community.

"Our equipment is top notch. We would never have been able to do that without the support of our community. We are never afraid to do anything extra for them."