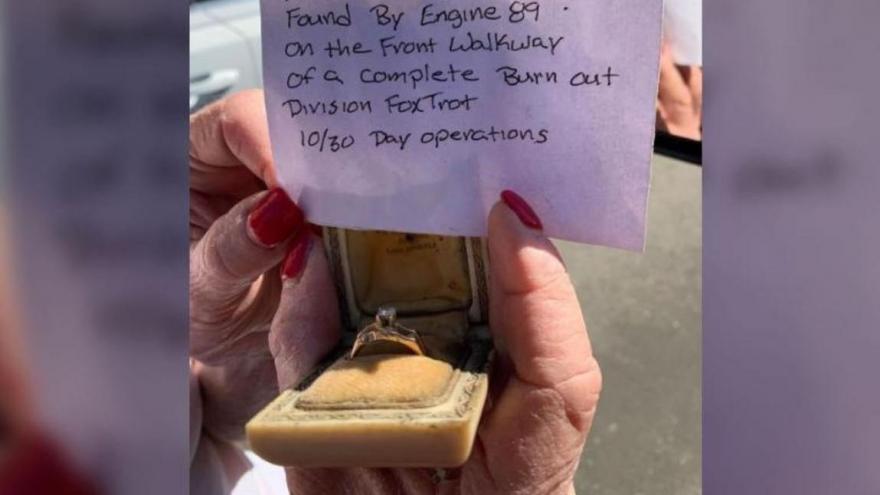 The fire department shared this image of the ring that was found.

(CNN) -- Firefighters battling the Getty Fire last week found a wedding ring in a box submerged in water. The ring would be the only thing that survived when Patty Shales home burned to the ground.

It was almost by chance that the firefighters spotted the ring on October 30. They were packing up their equipment and along the street, in the gutter, was a small box submerged in water, Los Angeles Fire Department Assistant Chief Jaime Moore said during a Tuesday press conference CNN affiliate KABC attended.

"There was one house in the area that was severely burned down," said Moore. "And I hate to say it, but it was destroyed and there wasn't anything left."

Moore said he thought that the ring came from that home, so he made a note and kept it in safe keeping. On Friday, when residents were allowed back in to the area, Moore said he was checking IDs when Shales came by and he recognized her address.

"I had the unfortunate task of telling her that her house had been destroyed, " he said. "But I asked her to hold on a minute and that I might have something for her."

Moore went to his vehicle and brought out the white ring box to show Shales.

"As I walked up, I said 'Ma'am, do you recognize' and that's about all I had to say," Moore said.

The ring belonged to her late mother, who was married for 70 years. Shales said she kept the ring in a back closet tucked inside another jewelry box.

"I feel that she sent me this to tell me that she's in heaven and she's OK," Shales said. "And that I'm going to be OK."

Shales said the fire destroyed the house her late husband built and she lost everything in it.

"I'm in shock," she said. "I don't have anything else except this."

Shales fled from her home during night, but she didn't specify the date. The Getty Fire broke out on early morning on October 28 and scorched over 740 acres.

Shales said she grabbed her purse, keys, dogs and ran out of the house. "I could see reflection of the fire that was in my house in the mirror," she said about driving away from the home. "I just said goodbye to the house."

Shales said she is just thankful that she survived and her daughter and dogs did as well. And thanks to the firefighters, she has a family heirloom to hold on to.