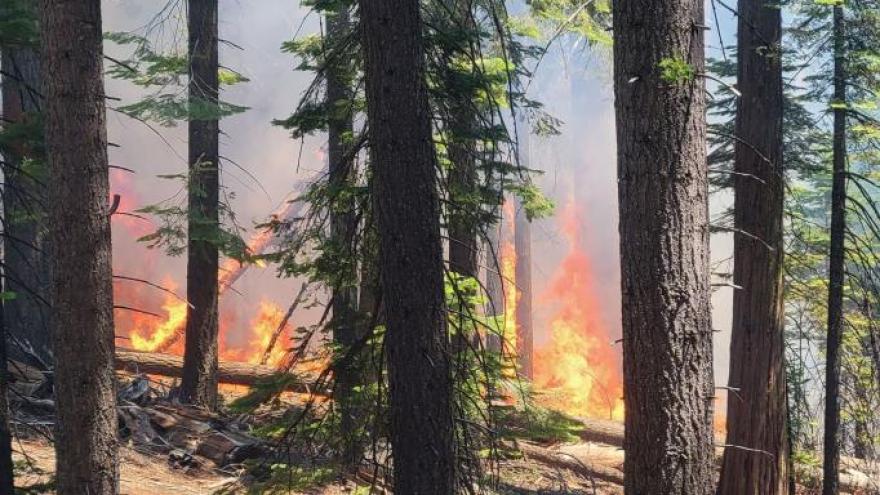 The Washburn Fire is burning near the lower portion of the Mariposa Grove in Yosemite National Park.

The Washburn Fire is estimated at 60 to 70 acres and burning near the lower portion of Mariposa Grove, Yosemite park officials said. Firefighters are working from the ground and air to suppress the blaze, and park officials have said the grove is closed until further notice.

Mariposa Grove is home to more than 500 giant sequoia trees, which can grow to over 250 feet tall. And while the grove was founded in 1857, they existed long before that, with some believed to be more than 2,000 years old.

The western US has been ravaged by wildfires in recent years, exacerbated by drought conditions tied to climate change. In California alone, more than 2.5 million acres were destroyed in nearly 9,000 fires last year, according to CAL FIRE.

Last month, officials in Southern California said they were bracing for another challenging summer and fall amid a shortage of firefighting crews and increased workloads.

The threat is not limited to California. Robert Garcia, the US Forest Service's fire chief for the Angeles National Forest, said the summer months are off to a "concerning start." Firefighting resources have been mobilizing since March to Arizona and New Mexico, where the Black Fire just became the state's second-largest blaze in history.

"Southern California typically has a fire season of historically late June and then into the fall," Chief Garcia told CNN last month. "But we're seeing activity now year round."

Yosemite is one of the most visited national parks in the US, drawing more than 3.3 million people in 2021. It encompasses nearly 1,200 square miles in the Sierra Nevada mountain range in eastern California.