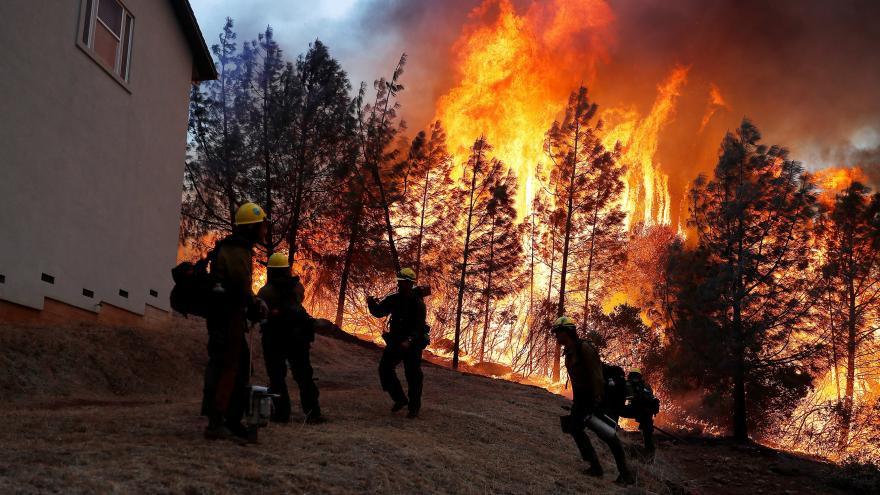 CHICO, Calif. (AP) — At least 63 people are now dead from a Northern California wildfire, and officials say they have a missing persons list with 631 names on it in an ever-evolving accounting of the victims of the nation's deadliest wildfire in a century.

The high number of missing people probably includes some who fled the blaze and don't realize they've been reported missing, Butte County Sheriff Kory Honea said. He said he's making the list public so people can see if they are on it and let authorities know they survived.

"The chaos that we were dealing with was extraordinary," Honea said of the early crisis hours last week. "Now we're trying to go back out and make sure that we're accounting for everyone."

Some 52,000 people have been displaced to shelters, the homes of friends and relatives, to motels — and to a Walmart parking lot and an adjacent field in Chico, a dozen miles away from the ashes.

At the vast shelter parking lot, evacuees from California's deadliest fire wonder if they still have homes, if their neighbors are still alive — and where they will go when their place of refuge shuts down in a matter of days.

"It's cold and scary," said Lilly Batres, 13, one of the few children there, who fled with her family from the forested town of Magalia and didn't know whether her home survived. "I feel like people are going to come into our tent."

The Northern California fire that began a week earlier obliterated the town of Paradise . Searchers have pulled bodies from incinerated homes and cremated cars, but in many cases, the victims may have been reduced to bits of bones and ash. The latest toll: 63 dead and 9,800 homes destroyed.

At the other end of the state, more residents were being allowed back into the zone of a wildfire that torched an area the size of Denver west of Los Angeles. The fire was 62 percent contained after destroying nearly 550 homes and other buildings. At least three deaths were reported.

Air quality across large swaths of California remains so poor due to huge plumes of smoke that schools from Sacramento to the Pacific Coast were closed on Friday, and San Francisco's iconic open-air cable cars were pulled off the streets.

Northern California's Camp Fire was 40 percent contained Thursday, but there was no timeline for allowing evacuees to return because of the danger. Power lines are still down, roads closed, and firefighters are still dousing embers, authorities said.

Anna Goodnight of Paradise tried to make the best of it, sitting on an overturned shopping cart in the parking lot and eating scrambled eggs and tater tots while her husband drank a Budweiser.

But then William Goodnight began to cry.

"We're grateful. We're better off than some. I've been holding it together for her," he said, gesturing toward his wife. "I'm just breaking down, finally."

More than 75 tents had popped up in the space since Matthew Flanagan arrived last Friday.

"We call it Wally World," Flanagan said, a riff off the store name. "When I first got here, there was nobody here. And now it's just getting worse and worse and worse. There are more evacuees, more people running out of money for hotels."

Word began to spread Thursday that efforts were being made to phase out the camp by Sunday, by gradually removing donated clothing, food and toilets.

"The ultimate goal is to get these people out of tents, out of their cars and into warm shelter, into homes," said Jessica Busick, who was among the first volunteers when she and her husband started serving free food from their Truckaroni food truck last week. "We've always known this isn't a long-term solution."

A Sunday closure "gives us enough time to maybe figure something out," said Mike Robertson, an evacuee who arrived there on Monday with his wife and two daughters.

It's unclear what will be done if people don't leave Sunday, but city officials don't plan to kick them out, said Betsy Totten, a Chico spokeswoman. Totten said volunteers — not the city — had decided to shut down the camp.

Walmart has added security to the location and is concerned about safety there, but it is not asking people to leave, spokeswoman LeMia Jenkins said.

Some, like Batres' family, arrived after running out of money for a hotel. Others couldn't find a room or weren't allowed to stay at shelters with their dogs, or in the case of Suzanne Kaksonen, her two cockatoos.

Kaksonen said it already feels like forever since she's been there.

"I just want to go home," she said. "I don't even care if there's no home. I just want to go back to my dirt, you know, and put a trailer up and clean it up and get going. Sooner the better. I don't want to wait six months. That petrifies me."

Some evacuees helped sort immense piles of donations that have poured in. Racks of used clothes from sweaters to plaid flannel shirts and tables covered with neatly organized pairs of boots, sneakers and shoes competed for space with shopping carts full of clothes, garbage bags stuffed with other donations and boxes of books. Stuffed animals — yellow, purple and green teddy bears and a menagerie of other fuzzy critters — sat on the pavement.

Food trucks offered free meals and a cook flipped burgers on a grill. There were portable toilets, and some people used the Walmart restrooms.

Someone walking through the camp Thursday offered free medical marijuana.

Information for contacting the Federal Emergency Management Agency for assistance was posted on a board that allowed people to write the names of those they believed were missing. Several names had the word "Here" written next to them.

Melissa Contant, who drove from the San Francisco area to help out, advised people to register with FEMA as soon as possible, and to not reveal too much information about whether they own or rent homes or have sufficient food and water, because that could delay aid.

"You're living in a Walmart parking lot — you're not OK," she told Maggie and Michael Crowder.

MAGALIA, Calif. (AP) — Cool weather helped fire crews gain ground Thursday against the nation's deadliest wildfire in a century, as the search went on for more bodies. At least 56 people were killed and 300 were unaccounted for a week after the flames swept through.

More than 450 searchers were assigned to look for remains in Paradise, which was all but destroyed Nov. 8, and in outlying areas such as Magalia, a forested town of about 11,000. Many of the missing were elderly and from Magalia.

"If this town does recover, it's going to take many, many years," said Johnny Pohmagevich, an 18-year Magalia resident who lives up the road from many burned homes.

Police drove around town, searching for those still in their homes and checking if they needed food and water.

Butte County Sheriff Kory Honea said Wednesday night that 130 people were missing. His office later released a list of 300 who were unaccounted for, though spokeswoman Miranda Bowersox said some of those may simply not have checked in with officials or family.

At the other end of the state, crews made progress against a blaze of more than 153 square miles (396 square kilometers) that destroyed over 500 structures in Malibu and other Southern California communities. The fire was 57 percent contained, Cal Fire reported.

At least three deaths were reported in Southern California.

Officials in Northern California put the number of homes lost there at nearly 8,800, and the sheriff said the task of recovering remains had become so vast that his office brought in 287 more searchers Wednesday, including National Guard troops. The search crews used 22 cadaver dogs.

Interior Secretary Ryan Zinke joined California Gov. Jerry Brown on a visit to Paradise on Wednesday, saying it was the worst fire devastation he had ever seen.

"Now is not the time to point fingers," Zinke said. "There are lots of reasons these catastrophic fires are happening." He cited higher temperatures, dead trees and the poor forest management.

The governor said officials would need to learn how to better prevent fires from becoming so deadly .

It will take years to rebuild, if people decide that's what should be done, said Brock Long, administrator of the Federal Emergency Management Agency. "The infrastructure is basically a total rebuild at this point," he said.

While most of Paradise was wiped out, in Magalia there was a sharp dividing line between homes that burned and those that were spared.

"Magalia has so many trees. I honestly can't believe it just didn't get leveled," said Sheri Palade, an area real estate agent.

Tom Driver, the office manager and elder at Magalia Community Church, said he heard the church made it through the blaze, though he did not know whether his home did.

"I've been able to account for all of the congregation," said Driver, who is staying with family in Oakland. "They're all over the place, but they got out in pretty good time."

Kim Bonini, one of those who got out safely, left after hearing someone on a bullhorn two blocks over urging people to leave. The power in her home had gone out that morning, leaving her with only her car radio.