Fire crews, air drops and a herd of goats help save Reagan Presidential Library from wildfire 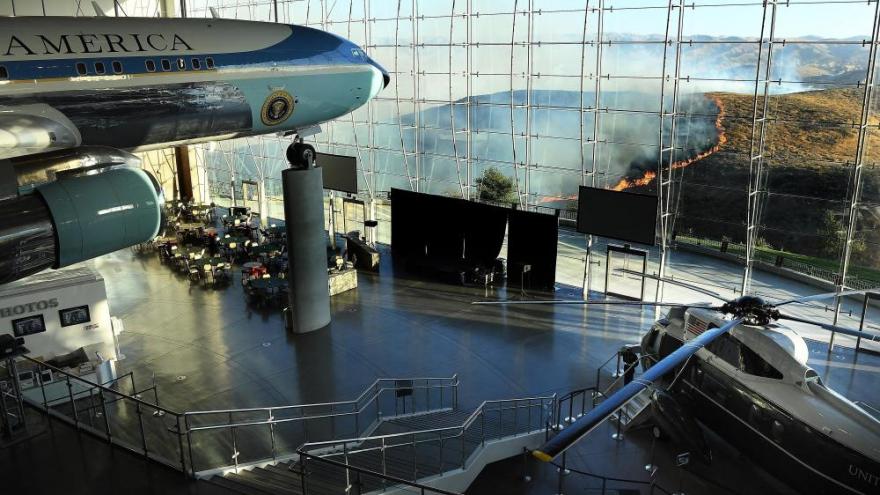 Former US President Ronald Reagan's Air Force One sits on display at the Reagan Presidential Library as the Easy Fire burns.

(CNN) -- A herd of ravenous goats played a role in saving the Ronald Reagan Presidential Library after a fresh wildfire erupted Wednesday near Simi Valley in Southern California, forcing officials to order evacuations of nearby homes.

In addition the firefighters and aircraft crews that responded Wednesday, a hungry herd of as many as 500 goats had helped create a firebreak months ago in the brush that surrounds the hilltop complex, officials said. The goats last spring ate up vegetation that could have fueled the fire.

"One of the firefighters mentioned that they do believe the goats' fire line helped them fight this fire," library spokeswoman Melissa Giller said. "They just proved today how useful they really are."

Named the Easy Fire, the blaze -- one of several California wildfires burning in dry and windy conditions -- began Wednesday morning in the hills near Simi Valley and has already burned 1,300 acres, according to the Ventura County Fire Department. It threatened 6,500 homes and forced school closures.

Firefighting aircraft were dropping liquid in the area near the library in a bid the stop the fire, CNN's Bill Weir reported from the scene.

"Non-stop water drops is probably what really saved us," Giller said. "We are just grateful."

Other crews assaulted the fast-moving flames from the ground.

Flames surrounded the 1,300-acre complex at one point. Heubusch said a fire had never come so close to the presidential library.

Aerial video from affiliate KABC showed a long line of fire burning on a ridge in the hillsides, parts of which were near the library and a residential neighborhood. Thick smoke rose from the flames.

Simi Valley police ordered evacuations of the library -- which also hosts the graves of the nation's 40th president and first lady Nancy Reagan -- and homes along a few nearby streets, police watch commander Adam Darough said.

A skeleton library staff -- including security workers, the library director, the facility manager and the head curator -- remained at the facility, trying to protect what they can, including artifacts and photographs, library spokeswoman Melissa Giller said.

The library houses Reagan's presidential and California gubernatorial records, as well as the couple's personal effects, including most of Nancy Reagan's dresses dating back to the 1950s and her wedding ring.

The Simi Valley Unified School District closed all schools Wednesday because of the fire threat.