Fire conditions are 'extremely dangerous' in California, officials say, with 2 dead and thousands of acres scorched 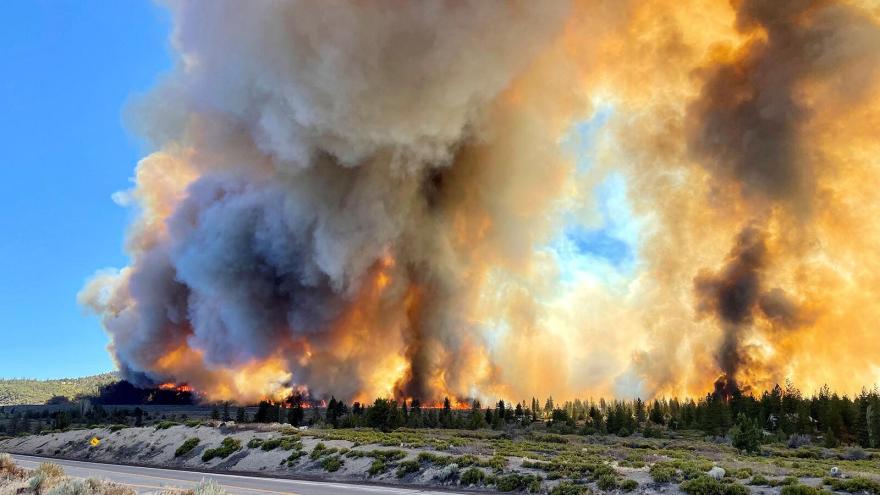 Smoke rises as the Mill Fire burns on the outskirts of Weed, California, on September 2.

(CNN) -- Prolonged drought has exacerbated fire conditions throughout California, where six active wildfires have consumed tens of thousands of acres in less than a week, and led to the deaths of at least two residents, officials say.

In all, fires burning across the state have collectively burned more than 23,000 acres since August 31, according to data from California's fire authority Cal Fire.

While fire crews have made substantial progress tamping down large fires in Southern California, the Mill Fire and Mountain Fire in the north are still just 40% and 10% contained, according to Cal Fire.

Two people have died in the Mill Fire, Siskiyou County Sheriff Jeremiah LaRue announced at a community meeting Sunday. The two women, ages 66 and 73 were found Friday by first responders in the city of Weed, the sheriff's office said.

Both the Mill and Mountain fires are tearing through Siskiyou County, which spans part of California's northern border, and have triggered the evacuation of thousands of residents, officials said. As of Sunday night, the Mountain Fire had burned 8,896 acres and the Mill Fire had burned 4,254 acres, Cal Fire said. The causes of the fires are under investigation.

Fire crews are battling the flames as much of California is suffering under a sweltering heat wave, during which some areas are seeing blistering temperatures 10 to 25 degrees above normal for this time of year.

The Mill Fire has destroyed 50 structures and threatened more than 400 others, Cal Fire said. In a Sunday night update, the agency said it does not expect the fire to spread further.

California Gov. Gavin Newsom declared a state of emergency in the county Friday, the day the Mill Fire began. In his proclamation, the governor said more than 5,800 residents were forced to evacuate due to the blaze.

The Mountain Fire, which is burning in steep terrain, was expected to remain active overnight Sunday into Monday morning, Cal Fire said. The vegetation and other fire fuels in the area are "at or approaching critical levels for dryness," according to the agency.

California, like much of the West, is in the midst of a severe prolonged drought, which has left wide swaths of the state's vegetation brittle, dry and ripe for burning.

"All these fires now have receptive fuel beds to burn," he said. "Now, when anything gets started it has that potential for exponential growth in a short period of time just because everything is so tinder dry."

Those dry conditions also drove recent wildfires in Southern California, where the Route Fire has burned 5,208 acres in northern Los Angeles County, according to Cal Fire. The wildfire, which is now 96% contained, exploded to that size in less than 48 hours.

Observing the severe growth of the Route Fire, Angeles National Forest Chief Robert Garcia warned that its behavior "should be a wake-up call to us all about the potential that we're in and we're entering into over the next few days in terms of the fire conditions, very rapid fire growth, and very, very explosive fire behavior."

Further south, at the California-Mexico border, the Border 32 Fire has consumed 4,456 acres since it began Wednesday, Cal Fire said. Now 90% contained, the fire has destroyed 10 structures, the agency said.

Heggie cautioned the public to be extremely alert to the risky fire conditions, especially as people celebrate the Labor Day holiday.

"All activities outside that could potentially start a fire, we're asking people to maybe think about an alternative just because the danger is so increased as we get into this holiday, tomorrow and through the beginning of next week," Heggie said Sunday.