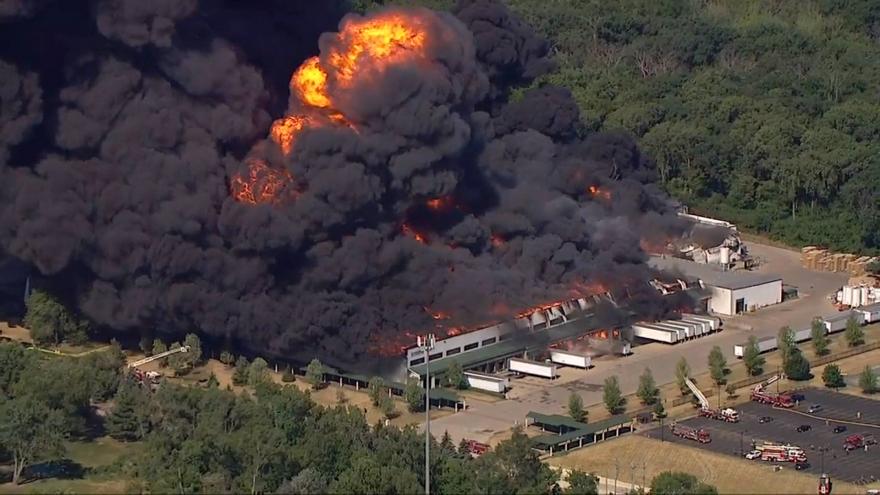 (CNN) -- The fire at the Chemtool Inc. plant in Rockton, Illinois, has been contained, the Rockton fire chief announced Wednesday morning in a news conference.

The fire broke out Monday morning and prompted the city fire department to order a mandatory evacuation for all residents and businesses in a 1-mile radius of the plant, police said in a message on Twitter.

The mandatory 1-mile evacuation area around the site, as well as a mask wearing request, is due to concerns about "particulate matter that can become pulmonary irritants," especially to those with compromised immune systems, said Dr. Sandra Martell, public health administrator for Winnebago County.

"Please do not pick up waste that falls from the sky and is related to the fire," Martell advised at a news conference Monday evening. "We do not know what that waste contains. Please do not handle it with bare hands. Use a shovel, use gloves and sequester it -- meaning keep it separate from your household waste -- so that we know how to properly dispose of it. It's very important. We are reliant on our groundwater in this community and keeping that safe is of utmost importance to us."

Wilson said that fire operations and suppression at the facility are still underway and ongoing.

"This is going to be a long process of getting deep inside of this building that has been destroyed by fire -- moving materials around so the firefighting crews can do proper extinguishment and proper containment," he said.

In addition to the fire being contained, Wilson noted "the hazardous materials are contained at this point."

There has not been any release of toxins in the waterways and water system in Rockton, the fire chief highlighted.

Speaking at a news conference earlier Monday, Wilson said the department's water-based firefighting suppression has stopped inside the building, and they're now letting the product "burn off."

About 150 homes are in the evacuation zone, he said.

The burn-off at the plant is expected to take several days. More than 40 agencies and 150-175 fire personnel are on the scene. The cause of the "catastrophic incident" has not been determined, Wilson said.

The 70 employees at the factory were able to get out safely, Wilson said. When fire crews arrived, the flames were through the roof and clouds of smoke filled the sky, CNN affiliate WREX reported.

"He's been evaluated and been sent home. So he's doing fine," Wilson said.

Gov. J.B. Pritzker has activated the State Emergency Operations Center to mobilize emergency response personnel and facilities that will monitor the fire.

Residents of Rockton, located about 15 miles north of Rockford near the state line with Wisconsin, reported hearing a series of explosions.

"My family and I live in the evacuation zone," Thomas Rollette told CNN. "We heard the explosions this morning and decided to check outside maybe five minutes afterwards when our dogs wouldn't calm down. By that point the smoke was already filling the sky."

He said the first explosion sounded "like somebody lit off a decent-sized firework."

"It wasn't until more and louder explosions came that I even thought something was going on. Seeing the wall of smoke outside just confirmed it for me, and pretty soon after they were telling the nearby residents to evacuate."

According to the company's website, "Chemtool Incorporated offers a wide variety of lubricating greases to meet your needs."

The Lubrizol Corporation, which owns the facility, released a statement about the incident.

"At approximately 7 a.m. today, local emergency personnel responded to a fire at the Lubrizol Corporation's Chemtool Facility in Rockton, Ill. We have confirmed all on site are safe and accounted for. Our concern right now is for the safety of all our employees and the surrounding community," the statement said.

"As a precaution, authorities have evacuated residents in a one-mile radius of the site. We do not yet know what caused this incident, but we will be working with local authorities and with our own risk management team to determine what happened and identify any corrective actions.

"We will share more details as they are known. We are grateful to our employees, first responders and safety forces responding to this incident."

Salvation Army staff and volunteers set up a mobile unit to provide food to first responders, the Salvation Army of Rockford & Winnebago County said, according to WIFR.