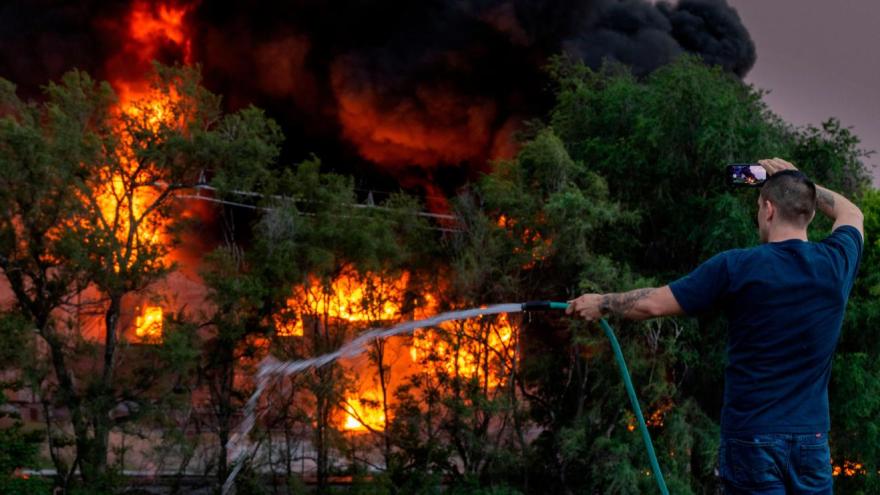 A fire that burned part of a chemical plant in Nebraska's most populous city led officials to urge some residents to evacuate the area, and pictured, a man sprays down the roof of a building that is near a chemical plant that was on fire on May 30 in Omaha, Nebraska.

(CNN) -- A blaze that sparked explosions and burned part of a chemical plant in Nebraska's most populous city Monday is no longer a threat to the public, a fire official said Tuesday morning.

Firefighters had previously urged residents in an area south of downtown Omaha to temporarily evacuate because of explosions and smoke from the fire at the Nox-Crete chemical facility.

"We don't believe there's any threat to the public for the smoke that's coming off right now. We pretty much have most of it out," city fire Battalion Chief Scott Fitzpatrick told reporters Tuesday morning.

The blaze, south of downtown, was reported just before 7 p.m. Monday, the city fire department said. Huge flames were consuming part of the building, sending columns of dark smoke into the air, video from CNN affiliate KETV showed.

No one was at the building when firefighters arrived, Fitzpatrick said. No injuries have been reported.

Though most of the fire was out late Tuesday morning, firefighters still were putting out hotspots, Fitzpatrick said.

The fire's cause wasn't immediately known, the department said.

Nox-Crete produces chemical products to help with concrete work, according to the company website. CNN's attempts to reach Nox-Crete for comment were not immediately successful.

The site's owner told firefighters what chemicals were inside, and, because they were flammable, fire officials asked nearby residents to evacuate, Fitzpatrick said. Fitzpatrick said he didn't have a list of the chemicals, but knew containers of propane were inside.

"We had propane bottles that exploded, and some other chemicals in there. We're not sure what chemicals they were that exploded, but we did have projectile flying at least 50 feet in the air from those explosions," Fitzpatrick said.

Chemicals from the plant likely would have been washed into the sewer as firefighters fought the flames, but "the wastewater is being monitored by the street department, public works, to make sure that that's all being diluted and taken care of and safe," Fitzpatrick said.

Fire officials initially recommended evacuations for people living between South 13th and South 20th streets and Leavenworth and Martha streets "due to the explosions and smoke from the fire," Fitzpatrick told CNN late Monday.

Evacuees were told they could go to Omaha's Columbus Community Center if they needed a place to shelter. Thirteen people -- three families and individuals outside those families -- went to the center, Fitzpatrick said.

Two of the families were put up in hotels for the night, and the others stayed with friends, Fitzpatrick said.