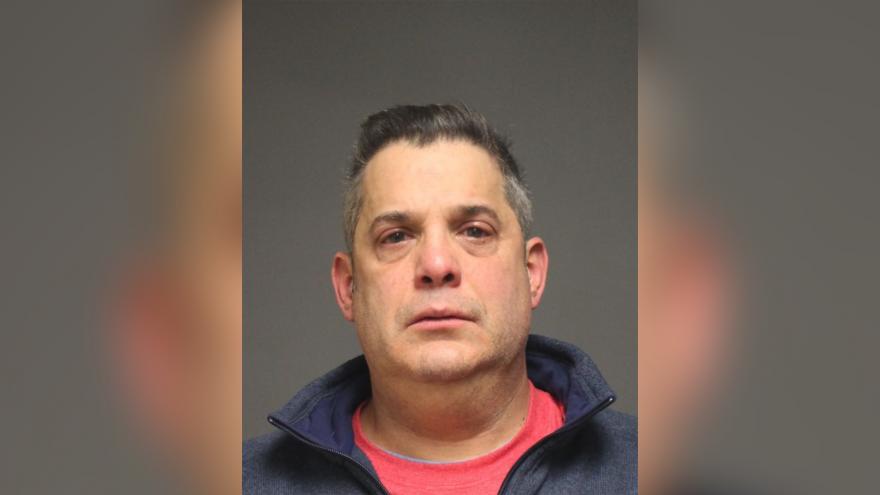 (CNN) -- A Connecticut man has been arrested and lost his job after video surfaced of him yelling at employees of a smoothie shop Saturday, where he claimed his son received a drink with peanut butter, causing a severe allergic reaction sending him to the hospital.

According to Fairfield Police, James Iannazzo picked up smoothies at a Robeks smoothie store Saturday afternoon and soon after called 911 for an EMS response for a juvenile suffering from an allergic reaction. The juvenile was later transported to an area hospital, police said.

"A short time later, Iannazzo returned to Robeks and confronted employees, yelling at them and demanding to know who had made the smoothie which contained peanuts, causing his child's allergic reaction. When employees could not provide Iannazzo with the answer he became irate, yelling at the employees using a number of expletives," police said in a statement. "He then threw a drink at an employee, which hit their right shoulder. The employee reported that they had no complaints of pain or injury. Iannazzo also made comments toward an employee referencing their immigration status."

Police said employees reported telling Iannazzo to leave, but he refused, at one point allegedly trying to open a locked "Employees Only" door leading behind the counter.

An attorney for lannazzo said when lannazzo placed his order at the Robeks he told employees it must not contain peanuts and his receipt reflected the order should not contain peanut butter, but he "wholeheartedly regrets the incident."

His attorney also told CNN affiliate News 12 Connecticut, "His son is on the road to recovery."

"When faced with a dire situation for his son, Mr. lannazzo's parental instinct kicked in and he acted out of anger and fear. He is not a racist individual and deeply regrets his statements and actions during a moment of extreme emotional stress," attorney Frank J. Riccio said in a statement.

Employees later told investigators Iannazzo never told them about the peanut allergy but only asked that there be no peanut butter in his drink, police said.

In video shared widely on social media, a man later identified as Iannazzo is seen yelling at the store employees asking who made the drink, and can be heard using expletives and telling one employee they were an "immigrant loser."

According to police, Iannazzo left the scene before they arrived, but later turned himself into police without incident.

Iannazzo was charged with Intimidation Based on Bigotry or Bias in the Second Degree, Breach of Peace in the Second Degree and Criminal Trespass in the First Degree, police said. He was issued a court appearance date of February 7 at Bridgeport Superior Court.

"At Robeks, our priority is to protect both store team members and guests. The company and its franchisees have a zero-tolerance policy for this type of behavior, and we are thankful that the franchisee's team members were not physically hurt," Robeks spokesperson Barbara Caruso said in a statement. "We appreciate the swift action by law enforcement and the judicial system in pursuing criminal charges for this unacceptable behavior."

A spokesperson for Bank of America, where Iannazzo worked as a Merrill Lynch financial advisor said he was no longer employed there.

"Our company does not tolerate behavior of this kind. We immediately investigated and have taken action. This individual is no longer employed at our firm," Bank of America/Merrill spokesperson Bill Halldin said.