Fights erupted at a high school in Louisiana. So these dads took matters in their own hands 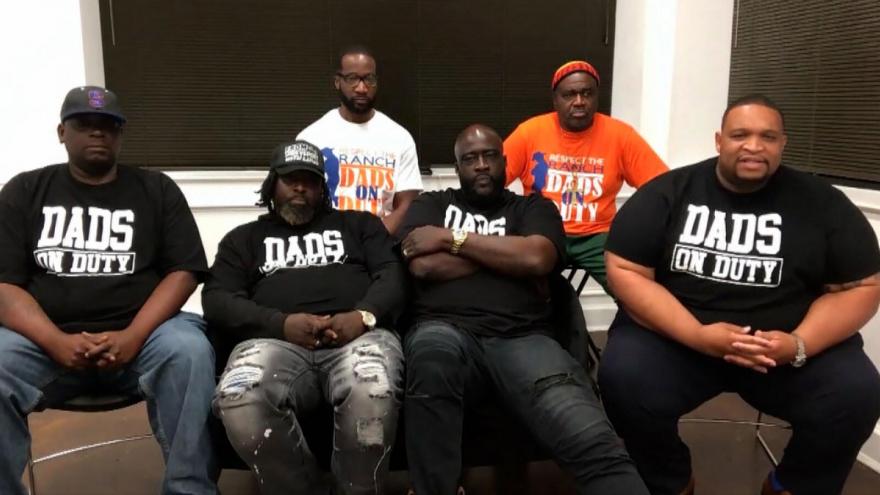 Six members of Dads on Duty, who started taking shifts in the halls of Southwood High School to calm students, spread positivity and keep the peace.

(CNN) -- A violent week of fistfights at a Louisiana high school led to the arrests of at least 22 students last month. So a group of concerned fathers decided enough was enough.

They formed a volunteer group, Dads on Duty, and began roaming the halls of Southwood High School in Shreveport to calm students, spread positivity and keep the peace.

So far it's working.

The group of about 40 fathers, wearing Dads on Duty T-shirts, patrol the campus every weekday on different shifts, working as community leaders and liaisons.

Since they started the initiative, there's been no fighting at the school.

"Just being there makes a big difference," Tracy Harris, one of the dads, told CNN's Don Lemon this week. "At first it was kind of shaky. But now when we walk up ... we give them good affirmations for the day. And it helps ... it controls their temper.

"Just seeing us and (that) we're embracing them in a different manner, it makes all the difference in the world."

At first, the plan didn't involve the dads going to school

The dads started conversations on how to take action after a second fight broke out at the school September 17. It involved two groups of teenage girls and led to the arrests of eight students, the Caddo Parish Sheriff's Office said.

That followed a brawl the day before, after which 14 male students were arrested. One student was charged with battery for punching an assistant principal, and another was arrested after he made threatening statements to the school's resource officer and a staff member, the sheriff's office said.

"I immediately knew that this isn't the school that we sent our children to, this isn't the community that we're raising our babies in," said Michael LaFitte, another of the dads. "I reached out to these guys and some other parents. We decided to have a meeting in downtown Shreveport ... (to) put together a master plan. That plan did not include coming up to the school. That was the furthest thing on our mind."

But after the meeting, which lasted about four hours, the dads decided that to be most effective they needed to show up at the school every day.

At first the plan was to call them Pops on Patrol, but some fathers thought the name sounded too much like the kids' animated TV series, "Paw Patrol."

So only hours before the fathers first went to the school, LaFitte sent them a message: "How about we call it Dads on Duty?"

The dads showed up at the school at 7:40 a.m., balancing their work schedules to patrol the campus in the morning, during lunch and after school. That was on September 20, and they've been going every school day since.

"The more we're around, the more they're opening up," said another dad, Michael Morgan Sr. "They didn't receive us well at first."

Of the dads who've signed up for the program, about two dozen patrol the school daily. All the fathers must undergo a criminal background check before being allowed inside the school. Dads on Duty are also helping out at extracurricular activities, such as school dances and football games.

Shreveport has seen an uptick in violence and crime in recent months, a trend experts blame on socioeconomic issues made worse by the lingering pandemic.

The city's mayor, Adrian Perkins, credits the fathers with helping to combat violence involving local youth. He turned up at the school for a Dads on Duty shift when the fathers first started, and said he was impressed by their commitment.

He even declared October 26 as "Dads on Duty Day" in the city.

"It's so effective because they have tapped into something that's so fundamental and basic -- that is parenting," Perkins told CNN. "You have a group of dads that decided to do something to protect their children without being prompted by the government, without getting paid, and turned the trajectory of this school."

Perkins said he's in talks with local officials to extend the program across the city, in elementary schools and middle schools as well as high schools. He'd also like to see it expand beyond Shreveport.

"It's not so much about the security part," he told CNN. "It's important because it's sending a signal to our children that our parents really care about our safety. It's really cool to see parents get so involved ... and show their faces every day."

The dads are a welcome sight for teachers, too

Dads on Duty has been working closely with the Caddo Parish School Board and local law enforcement, LaFitte said. The dads say their focus is not criminal justice -- they let sheriff's deputies handle that -- but an additional layer of parenting.

"We are armed with love," LaFitte said.

Southwood Principal Kim Pendleton and the Caddo Sheriff's Office did not respond to requests for comment. But Pendleton told CNN affiliate KTBS that her students love having the dads around and she hopes more parents will get involved.

Craig Lee, another Dad On Duty, said he believes their efforts haven't just helped students feel safer but have been a boost to teachers and school administrators as well.

"I see a perkiness to them because they now see that they have extra reinforcement," he said. "And so they give us smiles and thumbs ups."

The dads are now recruiting other Shreveport parents to get involved and have created a public Facebook page to attract new volunteers. On that page, they get messages from people all over the country saying they'd love to see Dads on Duty implemented in their communities as well.

The Shreveport dads would like to see that too. Just imagine: an army of smiling dads greeting students in schools from coast to coast, armed only with love.