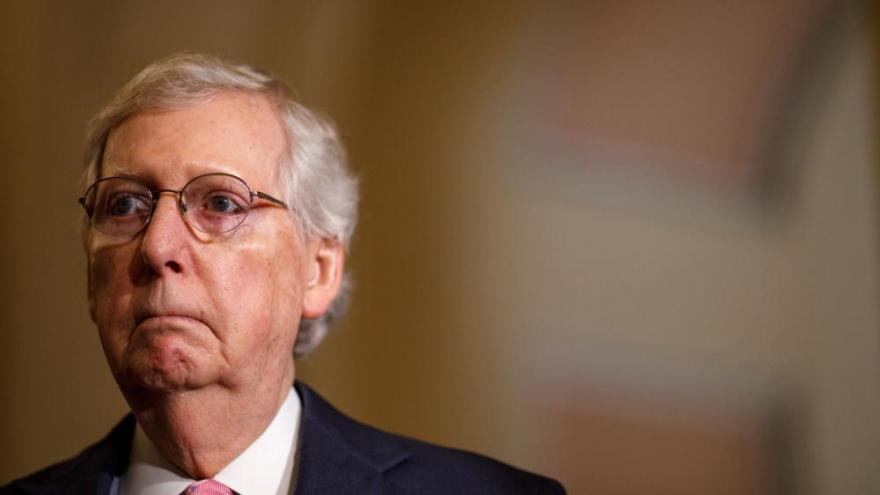 "The courts will decide disputes," Senate Majority Leader Mitch McConnell said at a news conference when asked about Trump's concerns of election fraud.

(CNN) -- Top Republicans are defending President Donald Trump's baseless claims of voter fraud and a rigged election even as some rank-and-file congressional Republicans have spoken out against the President's latest remarks.

Speaking from the White House Thursday, the President repeated his false claims that a count of legally cast ballots would show him winning the presidential race and said at one point, "This is a case where they're trying to steal an election. They're trying to rig an election."

Some prominent Republicans, including members of House and Senate leadership, are backing the President in the aftermath of the address.

Sen. Lindsey Graham, a close ally of the President and chair of the Senate Judiciary Committee, defended Trump on Thursday evening and echoed his baseless claims of voter fraud. "I'm here tonight to stand with President Trump," the South Carolina Republican, who was reelected Tuesday, told Fox News' Sean Hannity.

House GOP leader Kevin McCarthy of California did not respond to a request for comment from CNN, but in an interview Thursday evening with Fox News' Laura Ingraham he similarly echoed the President's meritless assertions of fraud and warned Americans to be on guard.

"Every American should stand up. Whatever they see ... tell us if they see something that's incorrect out there," McCarthy said. He later added, "Do not be silent about this. We cannot allow this to happen before our very eyes."

There has been no credible evidence of widespread voter fraud in this year's contest.

Senator Mitt Romney of Utah delivered the strongest rebuke of the President of any Senate Republican on Friday, writing in a tweet, "He is wrong to say that the election was rigged, corrupt and stolen -- doing so damages the cause of freedom here and around the world, weakens the institutions that lie at the foundation of the Republican, and recklessly inflames destructive and dangerous passions."

"Here's how this must work in our great country: Every legal vote should be counted. Any illegally-submitted ballots must not. All sides must get to observe the process. And the courts are here to apply the laws & resolve disputes. That's how Americans' votes decide the result," McConnell tweeted.

Sen. John Barrasso of Wyoming, a member of Senate GOP leadership, said in a statement, "As vote totals continue to update, Americans deserve confidence in a fair and transparent election. The President is right to ensure all legally-cast votes be observed and counted."

Other Republican leaders have so far been silent in the wake of Trump's White House address.

Senate Majority Whip John Thune of South Dakota, as well as Sens. John Cornyn of Texas, Deb Fischer of Nebraska, Joni Ernst of Iowa and Todd Young of Indiana -- all members of Senate GOP leadership -- did not respond to requests for comment.

GOP Sen. Roy Blunt of Missouri told reporters in the Capitol on Friday that Trump has a right to want to make sure all legal votes are counted but also warned: "You can't stop the count in one state and decide you want the count to continue in another state. That might be how you'd like to see the system work but that's not how the system works."

House Minority Whip Steve Scalise responded to a request for comment with a statement from spokeswoman Lauren Fine, saying, "Whip Scalise urges every state to fairly and equally enforce their election laws as written, and only count those ballots that were cast legally. Americans deserve full transparency to have confidence that their votes are being counted accurately."

House GOP conference chair Liz Cheney has not responded to requests for comment.

A number of rank-and-file House and Senate Republicans have pushed back on Trump's baseless claims, though most without mentioning the President by name.

GOP Rep. Will Hurd of Texas, who is retiring at the end of his current term, suggested that the comments are "dangerous."

"A sitting president undermining our political process & questioning the legality of the voices of countless Americans without evidence is not only dangerous & wrong, it undermines the very foundation this nation was built upon," Hurd tweeted.

Republican Rep. Adam Kinzinger of Illinois tweeted, "This is getting insane," and said, "if you have legit concerns about fraud present EVIDENCE and take it to court."

Several other Republican lawmakers echoed the assertion that evidence should be presented if it exists.

Michigan Republican Rep. Paul Mitchell, who is also retiring at the end of this term, tweeted, "If anyone has proof of wrongdoing, it should be presented and resolved. Anything less harms the integrity of our elections and is dangerous for our democracy."

"If a candidate believes a state is violating election laws they have a right to challenge it in court & produce evidence in support of their claims," Republican Sen. Marco Rubio of Florida tweeted.

But only a handful of congressional Republicans have spoken out in defense of Trump's cries of election fraud and calls to stop the counting in his race for reelection, which has drawn the wrath of the President's sons, who tweeted their frustration and anger about that lack of vocal support from elected Republicans.

"Where is the GOP?! Our voters will never forget...," Eric Trump tweeted.

"The total lack of action from virtually all the '2024 GOP hopefuls' is pretty amazing," complained Donald Trump Jr.

A few hours prior to the President's White House remarks on Thursday, Sen. Ron Johnson, a Republican from Wisconsin, had echoed Trump's message from over the past few days, questioning whether vote counting was as transparent as it should be and saying he shared the President's concerns about mail-in ballots.

Behind the scenes, many Washington Republicans who are supportive of Trump, but outside the campaign infrastructure, are increasingly hoping the process wraps up quickly and the President ultimately accepts the results even if the final count ultimately does not end in his favor. "I think it's cracked, everyone is ready for this to be over," said a senior Senate GOP aide.

A GOP congressional aide raised doubts about the President's claims of voter fraud: "I think it's hard to make the argument he's trying to make without actual instances of fraud to point to."

Before the President's latest remarks, some House and Senate Republican leaders and rank-and-file members were sidestepping the controversial charges, instead calling for all votes to be counted in a legal manner set out separately by each of the 50 states with the backing of the judiciary if there are problems that need to be resolved.

"Taking days to count legally cast votes is NOT fraud," tweeted Rubio, who says he is considering running for the White House in 2024.

"The courts will decide disputes," McConnell said at a news conference Wednesday when asked about Trump's concerns. "That's the way we do it in this country. Having close disputed elections is not unusual."

Asked about Trump's calls to stop the counting, Blunt told the Washington Post Thursday it should continue.

"I think we have to count every legally cast vote. I agree with the President, if he thinks there's a reason in some states that ballots are being counted outside what the law of that state allows, but I don't agree that we can stop the count," Blunt said.

Some of those who have publicly backed Trump largely argued that transparency is key in the vote count but avoided a full-throated defense of Trump's allegations.

"What the President wants to make sure is that every legal vote is counted. The people vote up until Election Day, not the days after as others would have. That's what the President refers to," McCarthy said at a news conference Wednesday. "We want to make sure it's legal, it's fair, and that every legal vote is counted, and that's what we're working towards. But I don't think people should vote after the election though."

But other Republicans who waded into the topic did so with dry statements aimed at ensuring all votes are counted:

"Under our Constitution, state legislatures set the rules and states administer our elections. We should respect that process and ensure that all ballots cast in accordance with state laws are counted. It's that simple. I hope we can reach a final resolution as quickly as possible," said Sen. Rob Portman, a Republican from Ohio.

"As we await all the results of the election, I urge everyone to be patient. Each state has different deadlines to receive ballots and a process in place to count those ballots," said Sen. Lisa Murkowski, a Republican from Alaska. "It is critical that we give election officials time to complete their jobs, and that we ensure all lawfully cast ballots are allowed and counted. The results will be known when all those ballots are counted."