Festivus, the 'Seinfeld' holiday focused on airing grievances, is for everyone 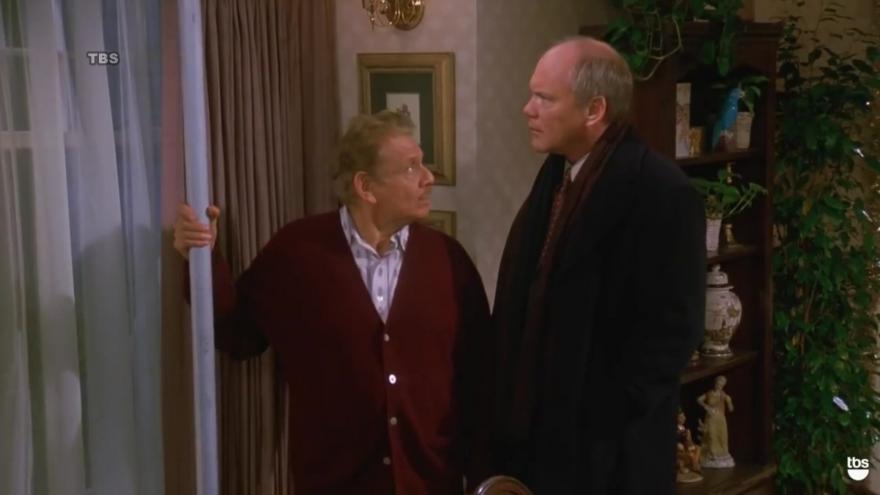 (CNN) -- For those folks who may be finding that holiday cheer is even harder to come by in the pandemic's second year, there's no need to deck the halls.

It's time to celebrate a holiday that allows us to maintain a healthy dose of grumpiness.

That's right, there is Festivus.

December 23 is Festivus, a day reserved in (television) history for all who feel that the normal holiday traditions don't quite fit the bill this year.

In pre-pandemic times, Festivus was reserved for those more apt to want to embrace their inner "bah humbug" than their Christmas spirit. It's a fair to say that more of us may be in that camp than ever before and the antidote, or at least an outlet that might prove cathartic to us this year, is Festivus.

The farcical holiday was birthed on the TV show "Seinfeld" on December 18, 1997, when George Costanza, played by Jason Alexander, revealed that his father (played by the late Jerry Stiller) created the day to contrast the religious and commercial aspects of the traditional December holidays. Jerry Seinfeld, the protagonist in his namesake show -- which ran on NBC from July 5, 1989, to May 14, 1998, with nine seasons and 180 episodes -- takes an interest in the holiday and its peculiar rituals.

And if we're getting really technical, Festivus may have roots dating back as early as 1966 when "Seinfeld" writer Dan O'Keefe, who introduced Festivus into the plotline, first heard his father dream up the holiday. "Festivus for the rest of us!" is the tagline that caught like wildfire following the episode.

The holiday comes complete with a set of traditions befitting this second year of a pandemic, new variants, more potential lockdowns and dreariness otherwise, including a drab pole instead of a brightly lit tree.

Perhaps most poignant, Festivus tradition also calls for a special ceremony known as the "airing of grievances," where you get to tell the people in your life how they disappointed you. I'm sure if "Seinfeld" were still producing new episodes, they'd expand the Festivus parameters to allow you to complain about the pandemic and everything else that's upside down in your life.

I, for one, will happily gather around a scrappy, salvaged pole and complain my head off. I will kvetch about all of the missed family gatherings, the missed dates with friends, the missed playdates for my kid. I will even gripe about the missed moments when I could have met a stranger, making a new friend, a neighbor, a new opportunity, a breath of new life. I feel better just thinking about all the complaining, about letting2021out in one fell swoop of verbal run-ons, all in the name of Festivus!

I hope I'll feel better and be grateful my family is doing OK and my toddler will have more fun ripping wrapping paper and playing with the box containing the toy that took forever to arrive.

I know that airing my gripes could be cathartic, but too much complaining, like too much of anything, might not be so good for me.

"The trick to doing so in an emotionally healthy manner is to distinguish between two types of grievances -- those we can't do anything about and those we would actually like to resolve," said Guy Winch, a New York-based clinical psychologist who has a following as Dear Guy on TED and as the co-host of the Dear Therapists Podcast, via email, in an earlier interview.

If your grievances are over things out of your control, like illness, the cancellation of holiday plans or job stresses, then "by all means, stand around that pole and vent," Winch said.

But if you have some control over the grievance, yelling at a ragged pole with others listening might not be the answer. Opt instead to address the grievance with them directly, or "scream into an abyss but don't create tension and fights that could ruin what would otherwise be a lovely (tongue-in-cheek) celebration of pettiness, misery, whininess, and victimhood," Winch said.

Just complaining isn't a helpful strategy, according to Tina Gilbertson, a Denver-based psychotherapist and author of "Constructive Wallowing: How to Beat Bad Feelings by Letting Yourself Have Them."

"Airing your grievances is only half the battle when it comes to feeling better," she said in an earlier interview. "Make sure someone validates the emotions behind each grievance, or do this for yourself. For example, if you say, 'I hate feeling trapped at home,' give it a response like, 'Yes! It's terrible to feel trapped at home.' Every grievance needs a compassionate witness to be healing."

For those wanting to get really into the letter of the Festivus law, the pole and grievances are followed by an attempt to literally pin down everyone around you. This is obviously ill-advised if you're quarantining or avoiding unvaccinated relatives, or if you expect them to cook you dinner later. But it could be cathartic to wrestle your housemates and let out some of that extra tension, so long as no one gets hurt.

And yet, there is reason to pause before going full hog-on.

"I think the 'airing of grievances' as depicted in 'Seinfeld' is probably the last thing we need this year," said David Susman, a licensed psychologist based in Lexington, Kentucky, via email.

"With the compounded stresses from COVID-19, political strife and racial unrest from 2020, we need to focus on positivity, healing, and cooperation right now," added Susman, who is also an assistant professor of psychology at the University of Kentucky.

What a party pooper.

This year, Festivus, a holiday born of American television, which we have leaned on in this year of staying at home, isn't for the rest of us so much as it's for most of us. So, go ahead, put up your pole and air your grievances. Just maybe leave a tiny pinch of room for positivity if you can, because even George Costanza's father smiled once in a while.

This story has been updated from a December 2020 story.