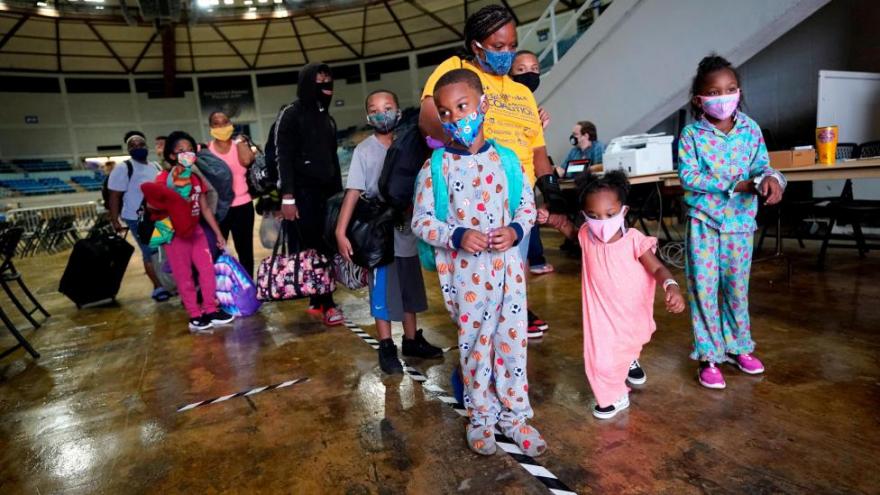 Victoria Nelson with her children Autum Nelson, 2, Shawn Nelson, 7, and Asia Nelson, 6, line up to board a bus to evacuate Lake Charles, Louisiana on August 26, ahead of Hurricane Laura.

(CNN) -- Before Hurricane Laura made landfall, emergency management responders were already facing unprecedented demands as they juggled wildfires, hurricanes, and ongoing disaster and recovery efforts amid a nationwide pandemic.

The Federal Emergency Management Agency, which falls under the Department of Homeland Security, is among those assisting with the response on all fronts. It has taken the lead in operational coordination for the federal interagency response to the coronavirus pandemic. It's also responsible for the federal response for hurricane preparedness and recovery.

"Unfortunately, I believe that the Federal Emergency Management Agency is trying to do the best they can, but they're being stretched to the maximum levels," said former FEMA Administrator Brock Long. "I think all of the disaster activities, including Covid-19 as well, is going to cause us to rethink the business enterprise and emergency management in the future."

The bandwidth of the agency in the throes of hurricane season had previously been a point of concern for some government officials and disaster experts as FEMA worked to assist with the coronavirus response. While the agency is equipped to help with a range of disasters, Hurricane Laura is likely to present its own set of challenges.

From securing shelters and coordinating evacuations that allow for social distancing to ensuring an ample workforce for emergency response, the pandemic is presenting a unique set of complexities for emergency management.

The financial impact from Covid-19 could also drive more people to shelters, according to Long.

"A majority of Americans don't have three months' worth of savings that they can fall back onto and they can't necessarily get a hotel room or they can't afford the gasoline and the cost of traveling hundreds of miles out of town, or out of an evacuation zone," he added.

A FEMA spokesperson underscored agency preparedness when asked about the current demands. "Lifesaving and life sustaining operations will always be the priority, and we will move staff to address those operations in response to any disaster that arises," the spokesperson said.

Still, in Louisiana, emergency management officials agreed the pandemic had made evacuations more difficult as Hurricane Laura approached the coast.

"What's being done on a state level, instead of picking them up and taking them to state-operated shelters, they're being picked up and taken to hotel rooms because of Covid concerns. We're trying to avoid congregate sheltering," said Mike Steele, communications director at the Louisiana Governor's Office of Homeland Security and Emergency Preparedness.

As of Wednesday morning, the state had evacuated about 900 residents to hotels. Steele noted that was only a portion of evacuees, since the figure does not include evacuations handled by parishes or individuals who evacuated on their own.

In May, FEMA released operational guidance for the 2020 hurricane season, taking the pandemic into account. It outlined unique measures the agency recommended to respond to hurricanes while avoiding the spread of the coronavirus.

"Emergency managers should anticipate the added complexities of conducting response and recovery operations while taking preventative measures to protect the health and safety of disaster survivors and the disaster workforce," the guidance reads.

"Our fear is 2017 with Covid," a FEMA official told CNN, referring to the year when Hurricanes Irma, Harvey and Maria hit. "We hope it's not as busy and as big as 2017 was."

In 2017, the agency deployed responders for back-to-back disasters, from historic wildfires in California to Hurricane Harvey on the Gulf Coast to Hurricanes Irma and Maria in Puerto Rico.

According to FEMA, Hurricanes Harvey, Irma and Maria caused $265 billion in damage and widespread displacement of survivors.

Another FEMA official noted, however, that some of the hurricanes in 2017 hit noncontiguous territories, making logistics more challenging -- something that will not be the case with Laura.

"We have fully functioning interstates and things pre-staged," the official said. "Texas and Louisiana and Florida are the three states best equipped to handle any sort of massive hurricane. They're doing all the right things with evacuations."

"This is a pretty standard hurricane, even with Covid," the official said.

Responding to multiple, large-scale disasters is not new for FEMA, but the agency has also had to contend with staffing shortages, which could be compounded by people opting out of response efforts due to coronavirus concerns. According to a FEMA spokesperson, 48% of its total workforce is currently available for deployment.

FEMA already has nearly 4,000 responders deployed to sites that have been declared disasters or emergencies, including for Covid-19. Another 850 responders are deployed to ongoing recovery operations. Nearly 1,500 have also been deployed to respond to needs like damage assessment for past events, according to the spokesperson.

In more recent emergencies and disasters, FEMA has emphasized its support role approach. It has become common to hear FEMA Administrator Pete Gaynor reiterate that emergency response should be "locally executed, state managed and federally supported."

For Hurricane Laura, FEMA plans to continue its support role as responders monitor the storm.

Laura "is an incredibly dangerous hurricane," Long said. "This is going to be, for that area, one of the worst storms they've seen in history."